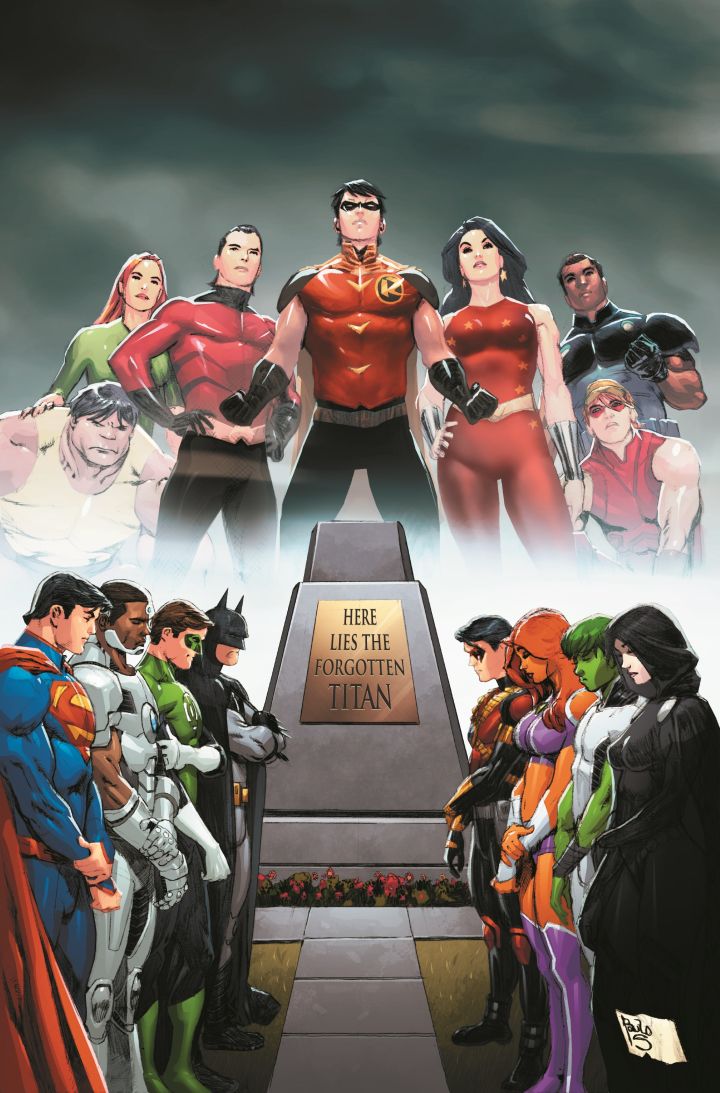 When “Covergence” ended, it seemed that DC was primed to start telling stories that fell somewhat outside of standard continuity, or at least use some of their past continuity to enhance the current storytelling. “Titans Hunt” is an attempt to do just that, and one that fails in many, many ways. Be warned that spoilers must be discussed when talking about this book. 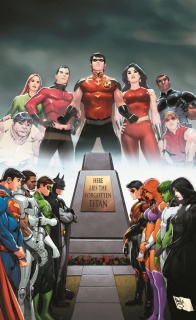 CONVERGENCE is over, but the ripples are still being felt, especially by a young precog named Lilith. What are these visions she’s having of a Teen Titans team the world never knew? And why does she feel compelled to seek out Dick Grayson, Roy Harper, Donna Troy and an Atlantean named Garth and warn them that something dark and sinister is coming after them? Who are Mal, Gnarrk, Hank Hall and Dawn Granger, and what is their connection to the others—and to the fate of every soul on Earth? This is the Secret History of the TEEN TITANS!

To sum up this book in a nutshell is difficult, but I’ll give it a go: some of the members of the pre-New 52 Teen Titans are having flashes/weird experiences that all involve around Lilith Clay, a therapist/D-level Teen Titan herself. These include characters we’ve seen a lot in the New 52, like Dick Grayson and Roy Harper, but also some new arrivals, like Garth (aka Aqualad/Tempest) and Gnaark (more on him later). All of them seem to be drawn together by Lilith for some purpose that remains unclear, besides for a cash grab of a comic.

This premise is shotty at best, and gets complicated by DC’s bizarre continuity situation. If I am understanding this correctly, it appears that Lilith either has come over to Earth Prime from the pre-Flashpoint Earth, or she somehow has knowledge, Psycho Pirate-style, of what happened there. So, she’s all knowing (sort of) and wants to get the gang back together.

But here’s the part that makes no sense, from a marketing strategy – she’s reuniting a lineup of the Titans that is both incomplete and totally inconsequential. If the idea of the book was to reunite the original Titans – Speedy, Robin, Kid Flash, Wonder Girl and Aqualad – that’s interesting. If they want to use this to reunite the Wolfman/Perez lineup of Cyborg, Nightwing, Starfire, Wonder Girl, Raven, Jericho and Beast Boy (essentially, the Teen Titans Go! lineup plus a few more), that also makes a lot of sense. Hell, I could get behind a straight up Geoff Johns-era reunion, even if it would look a lot like the Scott Lobdell co-written sequential art abortion that is the current “Teen Titans” book. But I don’t think anyone – anyone – gives half a shit about the early 70s Teen Titans books, and even less care about Gnaark, Lilith and Mal Duncan.

These are some of the least popular and least important Titans to ever appear in the pages of the book. They also aren’t characters with a strong hook to lure in new readers. Their powers/abilities/looks/names are all so dull that it is no wonder these characters were shuffled off the main stage long ago.

Complicating matters worse is that Wally West, an original Titan, is nowhere to be seen. Now, I know that he is a character that the New 52 has substantially changed, but if this is a pre-Flashpoint thing, then not including him is absurd. If this is supposed to be something other than that, then bring the new version in. Kid Flash is as essential a member of the Teen Titans as can be imagined. It is absolutely absurd that he is not included here.

With the characters that do appear, Paulo Siqueira tries his best to elevate this book via his art, and the results are mixed. Because he has the unenviable position of introducing characters that we don’t yet know (but sort of do, especially if you are a long time fan), and because the New 52 necessitates toning down certain looks, he has to draw Gnaark like just a brawny dude, not a caveman. He is handcuffed by the ties to the old characters, but not given the tools to give the characters their best looks. In addition, he has to split the difference – on the cover for instance – between classic costumes for characters like Robin and Speedy, and the New 52 versions of those costumes.

It would be unprofessional of me to not note that the New 52 is consuming my opinions about this book, but that is the position that DC has put all their readers into. Siqueira tries his damnedest to make the comic flow, and the action sequences allow him the closest chance to do just that. His Grayson is very much in line with how we see him in his solo book and in “Batman and Robin Eternal” – he’s an amazing hand to hand technician, and a hell of a spy. Siqueira also illustrates the intensity and power of Garth (aka Aqualad) quite well, and while this sequence is plagued with issues, it looks gorgeous.

I have argued in the past that the Teen Titans, and the whole idea of legacy characters, is the true strength that DC has over Marvel – they have generations that matter. A huge part of that is the fact that the Teen Titans started as sidekicks, and moved out on their own. How do you square that with the New 52, where no one but Robin, and maybe Arsenal (was he ever called Speedy in the New 52?), were actual sidekicks?

I say all of this because the book has almost no chance to survive in this landscape – even if it was the most perfectly scripted and illustrated book in comics history. And this is not that in the slightest. While reading this issue, I found myself constantly thinking I missed something, and re-reading sections, only to find out that, nope, I didn’t miss anything. This is just a sub-par comic.

The gravest sin, however, is the reliance on the lamest and more predictable Roy Harper story possible, which is to have him fall off the wagon again. His addiction has become such a lazy way to make the character ‘interesting,’ but it really just makes him one dimensional. Addiction can be a great device in storytelling, but when it applies to Harper, it is often just a cheap way of showing him as flawed.

The sad thing is that Dan Abnett is a fine writer, and should know better than to get involved in this dreck. This is the definition of a company generated idea, and he is trying his best to make it readable, but it just so damn muddled. Almost nothing in the book works in the way it was intended to, and the inclusion of the minor Titans seems like an overcompensation for no Wally. Abnett attempts to give each of the ‘classic’ Titans a character moment to revel in, but they all fall flat. He and Siqueira present a Donna Troy that 2/3 of the DC3 believed to be Raven upon first reading, because there is nothing particularly Donna Troy-ish about their presentation.

That sequence also has one of the most egregious examples of bad dialogue in a comic that I’ve seen this year. Troy asks a local fisherman how long a building as been a ruin, and he replies, “A what? You mean derelict?” This is absolutely impossible to understand – he doesn’t understand the word ruin, but he does understand the term derelict? As DC3 member Zach Wilkerson says, no one would answer that question with an even more vague/unusual way to describe an abandoned home.

That one piece of dialogue is so perfectly encapsulating of the problems found herein – this is DC answering a question (“What can we do with the classic Teen Titans?”) with the most obtuse answer possible – “We can create a character that somehow has knowledge of their past, filter it through the New 52, remove a character that is continuity-problematic, throw in a bunch of cannon fodder, and make it a year-long story.” The answer should have been simple – tell a good story. But that is certainly not the answer we got.