Rejoice! Two powerhouses of indie comics have reunited to bring us action! Swordfighting! And lots and lots of terrifying faces. We’re in for quite the ride. 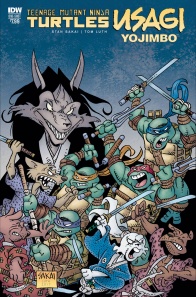 The TMNT are teleported to a world of talking animals—the world of Usagi Yojimbo! When the samurai rabbit embarks on a quest to save Japan and the deadly Jei blocks his path, a Turtle team-up may be the only chance for survival!

Considering IDW’s love of all things crossover (see “TMNT/Batman,” the entire Hasbro line, the other “Batman/TMNTA”), it didn’t surprise me that the turtles might have an adventure with another Martial arts themed character. What I didn’t realize until reading the backmatter of the comic is that they have actually met before…many many times before. Now, I must confess, I’ve read very little of either of these series; I’ve read maybe one issue of the new “TMNT” continuity and a FCBD story for “Usagi Yojimbo.” Sure, I caught some of the 90s cartoon when I was a kid but that was quite a while ago. Some might say that this makes me the wrong person to review this story but I say that this makes me even more qualified!

I say this because if you’re a fan of either the turtles or Usagi, you’ll probably be picking this up (unless the rather high price tag deters you) but for those of us who have minimal functional knowledge of either franchise, there isn’t necessarily that inherent appeal – We’ll be asking ourselves, “How much do I need to know to enjoy this comic? Can I just jump in?” and “Which of all these dang covers should I get?”

Well, as a stand-alone story, “TMNT/Usagi Yojimbo” does a really good job of keeping it understandable, even if it does make the story feel a bit simple. Let me explain.

Sakai only introduces us to the characters who are necessary for this side-adventure, which allows us to spend more time with our main characters but at the cost of a less fleshed out world. With just the information provided by the comic, we don’t know much about Usagi or the turtles’ adventures outside of this, save for the fact that Usagi has met them before. The villain, Jei, and the wise rat master, Kakera-sensei, are the only people who seem to have a history that those who have been following the comics would know.

However, even though I don’t know anything about them, Sakai’s distinctive character designs give me all I need to know. The comic opens on four panels of Usagi beating the living daylights out of some thugs, with a fierce and highly defined look on his face. However, once the bandits are dispatched of, his face softens into the button eyes and simple mouth of most of the background characters. Additionally, his movements are always very active, always striking dramatic (or at least different) poses in each panel. Kakera-sensei is, by contrast, drawn in a much more reserved manner: old and wised by time. That is until he gets into battle/invokes a spell – then he becomes animated, his mouth opening to reveal his teeth in a terrifying yell.

Stan Sakai’s artwork is something, though, that took me a while to get used to. It is very stylized and is reminiscent of ancient Japanese artwork, in that it tends to present the action straight on, in one plane. A lot of the action in this tends to happen in dense panels, filled with goons with highly exaggerated face, and, if anything is happening in the “background,” the lack of depth of field makes it feel like they’re all standing next to each other. This does not make the art unclear, far from it, the action is very clear and dynamic and fun, but it is something to be aware of.

The faces, as well, are a double-edged katana. While they are very expressive, the highly (and I mean highly) exaggerated expressions they put on can be a bit of a distraction. At the same time, these cartoonish faces are a perfect match for the tone of the comic.

This is not a serious comic off to tell some deep, important story that will change our characters forever; It’s an adventure to reattach a rock to another, bigger rock and standing in the way of our turtle, bunny, and rat heroes is another rabbit (maybe it’s a wolf) and an army of rabbit/bear mercenaries. The comic, though, does take itself seriously and Sakai does a great job of balancing these two tones.

The fights feel weighty, in part due to his paneling and utilization of two gorgeous two-page spreads showing the turtles and Usagi fighting, but the goons’ faces remind us of the comedic nature of the story. Same goes for when Jei skewers one of her minions. It’s just three panels of the minion’s face shriveling up until he’s just a skull covered in fur, his eyes falling out of his sockets, his nose just two slits and his teeth gnarled and about to fall out as well – it’s a moment that solidifies the threat that Jei poses. However, due to Sakai’s art style, it isn’t gruesome.

The comic isn’t overtly funny, either. It has funny moments, like when Kakera-sensei is chanting to summon the ninja turtles and the cute regular turtles are the only simple, non-intense parts of the panel but the comic isn’t making jokes left and right. It instead takes lets the intensity of the art clash with the cartoonish nature of the same art.

The biggest problem with the comic is, oddly enough, its length. As I mentioned earlier, this is a bit of a pricey comic and is around 40-pages in story length. While it tries its hardest to make the most of these pages, it still feels a bit rushed at points, especially in regards to the turtles. They don’t get a lot of development and while they have plenty of panel time, the focus is on Usagi, relegating the turtles to be assistants in battle. Had we gotten a few more pages, maybe we could have gotten some character moments from them.

All in all, though, this is a fun comic, even with its flaws. While I can’t say how much better this comic might be if you had prior knowledge of “Usagi Yojimbo,” anyone can definitely enter this comic and enjoy it. Any excuse to see two indie anthropomorphic martial-arts heroes team up, ey?