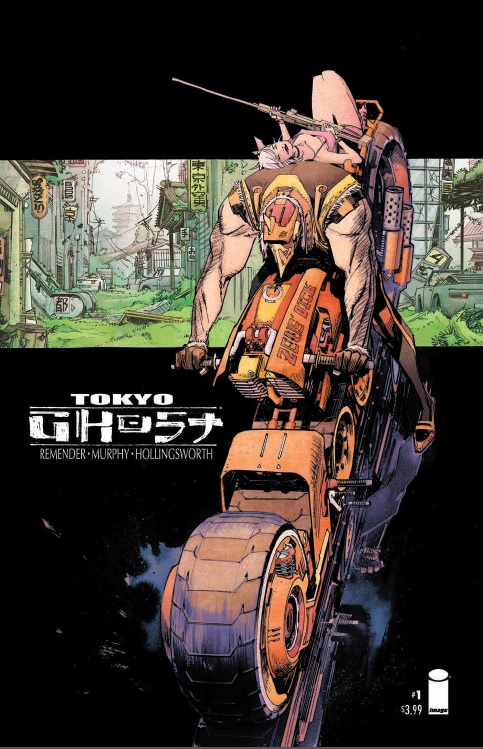 Remender and Murphy’s love letter to the hyperviolent comics of the 80’s/90’s is every bit as explosive as the canon it falls in line with. 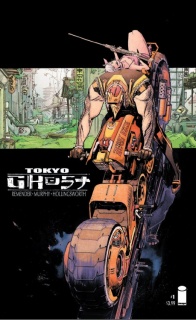 The Isles of Los Angeles 2089: Humanity is addicted to technology, a population of unemployed leisure seekers blissfully distracted from toxic contamination, who borrow, steal, and kill to buy their next digital fix. Constables Led Dent and Debbie Decay are about to be given a job that will force them out of the familiar squalor of Los Angeles to take down the last tech-less country on Earth: The Garden Nation of Tokyo.

There’s a fine line between homage and parody. There are a few great examples of films, TV shows, and comic books that manage to cherry-pick bits and pieces from classic sources and make them their own, as well as countless more that lose their own identity to over-reliance on recognisable material and played out cliches. Coming into this book, I have to admit I wasn’t sure which side of the fence it was going to fall on. (and this was after I’d confirmed that it wasn’t just a strange westernised version of the current monolithic manga “Tokyo Ghoul”).

Remender and Murphy have constructed a dystopia that feels like the toxic love-child of William Gibson and Neal Stephenson, a permanent night-time lit almost exclusively by neon adverts and explosions. The lawlessness of ‘The Isles’, coupled with Debbie and Led’s judge, jury, and executioner style of justice will be familiar to anyone who’s been exposed to 2000AD, while the limitless speedways, and Led’s distinctive future cycle, are clear nods to Western-centric manga “Akira”. However, while “Tokyo Ghost” may wear its influences unashamedly on its ripped denim sleeve, that doesn’t mean we rely exclusively on nostalgia to fuel this beast.

While there’s plenty to recognise here, Remender and Murphy do a great job of detaching “Tokyo Ghost” from the shackles of its predecessors. They take the audience on a good old fashioned chase sequence that lasts for almost the entirety of the book. Debbie and Led are an archetypal duo and the familiarity we feel with them allows Remender to skip exposition and just jump right in. As we tear through the city in search of villainous hacker ‘Davey Trauma’ we are given just enough time to see glimpses of plastic surgery, gambling, pornography, and deadly sports, all pushed towards their dizzying extremes. Murphy employs a number of amazing double page splashes throughout this chase that offer both arresting initial images and more detailed, revealing portraits on a second read. His pacing is so strong that, while this issue keeps the pedal to the floor from the first page we’re still able to build up a more intimate feeling about the world at large, almost by osmosis.

Just like the visual excess of the city itself, Remender pushes his writing to the limits in this first issue. Motor-mouthed Debbie monologues her way through the opening few pages with the cynical air of a seasoned city-dweller, and her futuristic cadence manages to feel both barely literate and strangely poetic. But it’s once the dialogue kicks in that Remender really opens the issue up and lets us see what he can do. Debbie’s garbled future speak may feel initially unintelligable, but it follows a solid internal logic and quickly becomes a charismatic thread that pulls you through the narrative. She’s our eyes and ears as we navigate through this crazy world and the pace and panache with which she communicates allows for a deceptive amount of information to slip through without ever feeling like it’s too heavy or obvious.

Murphy’s artwork is a joy. His construction of the city is a diesel-punk delight that is hazy enough to remain mysterious while still offering a strong, smog-coated backdrop for the action to play out. And what action it is too. Every single panel of this issue ripples with movement. Murphy channels the dynamism of Jim Lee as, for almost every single page, characters run, bike, fly, and otherwise traverse the city on various murderous rampages. He manages to balance absurdity with a visceral sense of weight and consequence, so much so that, when this issue’s villain pulled out a bright pink hover-scooter to cruise off on a video-game inspired killing spree, I wasn’t even fazed. SO much so that, when he pressed a button on said hover-scooter to reveal whirling helicopter blades of death I actually whooped.

But there’s more to “Tokyo Ghost” than simply danger porn and pretty pictures. Remender and Murphy are warning against the perils of over-reliance on technology. As Remender himself points out in the first letter’s column, “our impulse control is gone, our attention spans are shorter, and it’s only getting worse.” While this might seem like a rather doom and gloom viewpoint on the world, it is only the first issue, and  it’s undeniable that the speed with which technology is changing both our world and us as people is at times a little unsettling. More importantly, however, it also offers a veritable playground for speculative fiction, and it will be interesting to see where this creative team, who already seem perfectly in sync with one another, take it as the series continues.

Final Verdict: 8.9 – Smart meets stupid by way of heaps of fun. Whether you switch off your brain  and power through, or slow down and soak it all in, you’ll still find plenty to enjoy here.