Fresh off of a gameplay reveal at E3 for Lara Croft’s next game, creative teams on the “Tomb Raider” comics collide for a spectacular opening salvo in this miniseries. 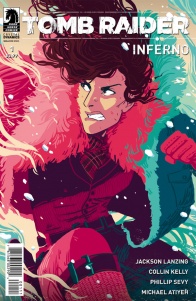 Trinity is on high alert–they know Lara Croft is coming and now, under the shrewd command of a new officer, they’re ready for any surprises, but Lara is steadfast in her quest to uncover their secrets. Though typically equally prepared, this time Lara may just find herself one step behind.

”Jackson Lanzing and Collin Kelly have done a wonderful job tying this comic book in with the Tomb Raider canon from the video games and previous Dark Horse comic series.” -AiPT!

Almost like clockwork after the events at Square Enix’s presentation of Shadow of the Tomb Raider at the 2018 Electronic Entertainment Expo, Jackson Lanzing and Collin Kelly (“Tomb Raider: Survivor’s Crusade”) are back at the adventures of Lara Croft yet again.

Lanzing and Kelly tell Lara’s newest story through two different focus characters paralleling one another. On the one hand, we have the so-far nameless Trinity agent in charge of the Antarctic dig site. She is determined to face Lara, but at the same time seems to have a mixture of fear and respect for her coming adversary. Even so, the narration on her end emphasizes Ms. Croft’s ability at facing Trinity and how no matter how many troops they have, the agent is unsure if she will survive.

While normally this would come across as over-praising of the protagonist, Lara herself is the other viewpoint character. She is herself, while very determined, shown in her possible audio will to be unsure if she is going to survive. Though she has become more assertive and proactive, along with more determined, she still is completely aware of how she tends to survive based mostly on luck. While Jackson and Kelly could have used this opportunity to overly emphasize how amazing the heroine is, this focus in on her vulnerability and humanity is much better, making a young woman who could be seen as too powerful or scary for others into someone who is completely aware of her own limitations.

The writers are fully aware that readers may be coming into this series either from having not read the preceding arc, or from having very little, if any, knowledge of the video game source material. As such, “Inferno” is written with only minimal information necessary, instead making use of the aforementioned audio will to give a very justifiable exposition dump on who she is fighting and why.

Lanzing and Kelly dial back Lara’s obsession, in part due to her being so near to her target anyway, to allow her to breathe and show at least some worry for how others may find her. While her obsessions were the focus of “Survivor’s Crusade,” there appears to be a different thematic focus for “Inferno,” to be revealed in subsequent issues.

Another Tomb Raider veteran, Phillip Sevy returns for the artwork on “Inferno,” having been temporarily replaced for “Survivor’s Crusade.” With his return, Sevy’s style re-acclimates readers to very cinematic storytelling.

As with his previous work, Sevy excels at perspective. From establishing shots to an over-the-shoulder look at Lara’s surroundings to a facial close-up, he takes great care to make sure that every scene can be grasped from all possible angles. This type of artistry is especially important when it comes to Tomb Raider, a franchise that uses very three-dimensional movement for the heroine, and helps to also give a grasp of the story from a quasi-video game angle. Playing into this work with perspective, Sevy works well with differing levels of light, from having the heroine in darkness to the light of day, realistically showing how light plays across her from differing levels of shade.

Another benefit to Sevy’s artwork is his use of facial expressions. From a close-up on small mouth movements to zooming in on the eyes, his panels seem akin to a motion picture, bringing to mind the Tomb Raider franchise’s latest foray into that medium as much as a cutscene would in a video game setting. Facial dialogue creates scary or even humorous moments, from Lara’s shock at a trap to her eye-rolling exasperation at seeing someone tied up with a bag on his head. His focus in on Lara’s face helps to show her progressive injuries, from dirtying her clothes and bruising her to sharp cuts on her forehead and cheeks. In doing so, Sevy presents the savage survivor that came home from Yamatai in the first place, the one who had been growing into a warrior of her own accord ever since, a duality of determination and vulnerability much like the writers indicate.

Fittingly, the facial expressions change from determined and exasperated to scared and exhausted over the course of the issue, much like Lara tends to develop over the course of some of her journeys before her second wind. The contrast between the imagery of the heroine landing on her own at the start and her battered, uncertain appearance and expression toward the end speaks volumes for the amount of pain she went through in such a short time, with Sevy telling a lot about what kind of story this one is that sets it apart from the previous arc.

Michael Atiyeh, yet another veteran of the series, returns with his beautiful, marvelous colors. The soft blues of the arctic clash against the oranges, browns, and beiges of the human-made constructs around, including but not limited to Lara’s coat, mechanical cranes, and temporary housing. The softness of the colors at rest make the moments of violence all the more shocking, with the aforementioned blues giving way to a sharp explosion of orange and yellow, a splash of fire that is nearly tactile in its intensity.

Altogether, this newest arc of the “Tomb Raider” comics continues a trend of very high quality, and the creative team does an excellent job of setting up a possible deconstruction of her as the huntress against Trinity.

Final Verdict: 8.5– Shortly after the previous arc and mere days following news from the video game source material, the creative team on “Inferno” creates a great lead-in to this story arc that gives plenty of room for newcomers.