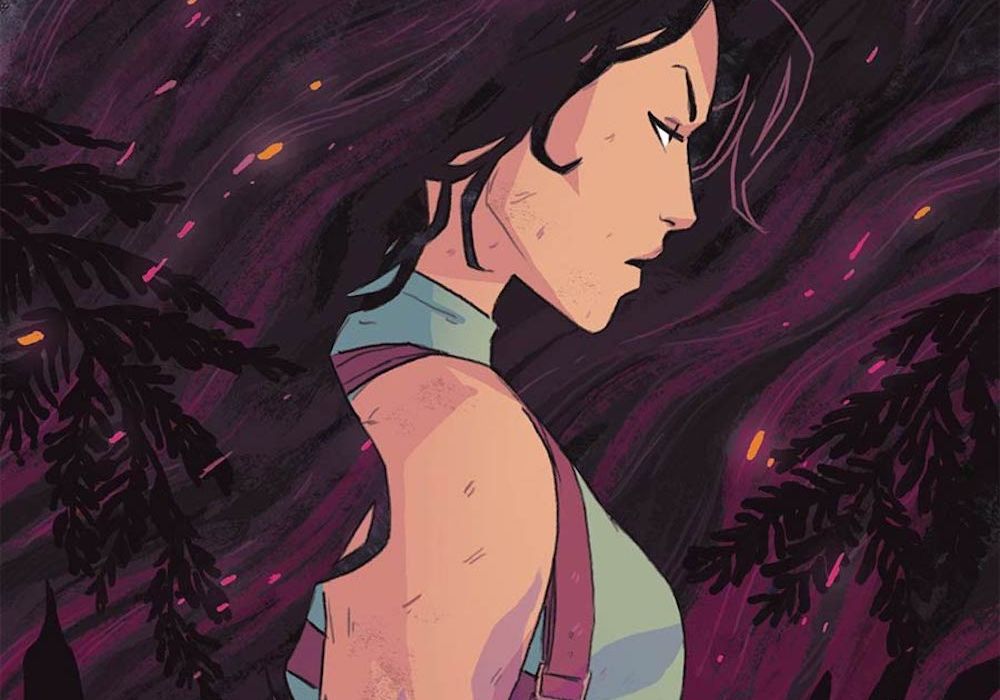 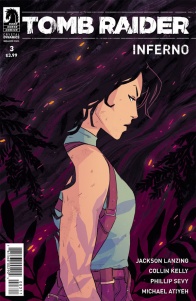 The lines of reality are blurred and Lara is lost in a mind-altered state caused by the most improbable of circumstances. Lara is forced to face her own memories–however painful they may be and relive all of her worst experiences. However, Lara ultimately comes to a realization that may just be her salvation . . . or possibly her demise, and must make an imperative choice, once and for all.

In a word, what is the penultimate issue of “Tomb Raider: Inferno?” Weird. Really, really weird. The entire issue is essentially one gigantic drug trip after the events of “Tomb Raider: Inferno” #2, enabling writers Jackson Lanzing and Collin Kelly to let loose on a continuity cavalcade across the entirety of the “Survivor” timeline of the Tomb Raider franchise, from the original game to its sequel to all of the comics that occurred between the two and since.

Lanzing and Kelly do an excellent job of delving into Lara Croft’s many emotional traumas through the utilization of a kind of “vision quest” brought on by the psychotropic effects of the bark of the Tree. Over the course of the issue, she is forced to assess and address many of her own personal problems, several of which seemed to have been overlooked for some time in favor of her compulsion to get closure on her father’s death. That death does come up, and is given ample room across several scenes to be lain out and dealt with, but Lanzing and Kelly do not leave us with an idea of a single-issue psychology as many other series may have done.

Instead, they look at a far wider range. Not only do they work their way through her nightmares about Himiko, but they address the people who died along her way, both those she failed to save and those she personally killed. Lanzing and Kelly look not only at the self-loathing Lara experiences about the amount of people she killed to save her friend, but also the even further sense of satisfaction, of enjoyment, that came with killing after so many fell to her bow, gun, or axe. The writers even bring up a lasting issue that has been in place, in one way or another, for quite a long time: her inability to accept that even though people are being hurt by being near her, that does not mean she should constantly push away every person who comes into contact with her in favor of fighting alone. Even as she literally battles old enemies from across the 2013 continuity, including even the less overall important arcs, the running theme remains her own conflict, not with other people, but with her own mind and ability to grow as a person. In a sense, Lanzing and Kelly prove that when it comes down to it, Lara Croft can be considered, to a certain degree, her own enemy.

Phillip Sevy is, as always, absolutely fantastic in the role of illustrator. Utilizing a mixture of full splash pages and double-page spreads, among other techniques, Sevy manages to portray the sheer unbridled chaos of Lara’s mind fighting the poison she ingested. Her traumas are portrayed all around her, up in the corners, dragging her off to a corner, standing alongside her as she tries to fight by them, and more. The toxic substance manifests through blurred faces that look akin to bloody masks, through the imagery of a tidal wave washing over our heroine as a silhouette similar to her is hidden within the very same waters simultaneously. At some points, Sevy even has Lara literally crash through the panel gutters from one scene to the next, showcasing how fractured her mind is becoming. When drawing out a fight scene against the illusory Knights of the Spore, Sevy has the various parts of the battle overlap one another, adding even further to the sense of disorientation and chaos, and furthering the appearance of the darkness that surrounds her in this dangerous situation.

The most intriguing illustration of all comes with Lara falling through a “pit” into a city from the sky, where Sevy actually stretches out her body, lengthening her as if she is falling through a wormhole, losing her sense of self and seeming to look almost inhuman in the process. It is a disturbing appearance, and works very well with the “bad drug trip” idea of the entire issue. Meanwhile, the most telling illustration about her own quest for self-identity and her attempt to overcome her issues comes with a circular trek, one that goes around a cavern and gradually turns her from a young woman running into a stream of flame, then out again the other side as a person. Without even needing a word, Sevy is able to portray what Lara Croft becomes throughout “Tomb Raider: Inferno” #3: a phoenix rising from her own ashes, ashes that are then portrayed further through her revelations about her past in a far more triumphant position than the scared young woman who entered this drugged nightmare.

Michael Atiyeh outdid himself with the coloring on this penultimate issue. While the tones of blue and red are not technically all that unique, the reasons and the usages of those hues and shades tell so much about the story itself. The blues of the calmer scenes are not just peace, but caution and perhaps over-protectiveness, an unwillingness to move forward and a feeling of being trapped in the past. Meanwhile, Atiyeh uses reds to indicate a fear of the future, of the blood to come and the blood that has already been shed by Ms. Croft, and even possibly her own fear of becoming just as bad as her enemies in her various journeys. By the time the colors even out to a more natural combination, be it normal grays and browns or greens or whatever the case may be, entirely depending not on Lara’s mood, but on the situation itself. In essence, Atiyeh manages to portray Lara Croft’s emotional distress with his colors, but also her eventual self-actualization and calm.

Michael Heisler’s lettering is similarly interesting, especially in two distinct points. First, the aforementioned circular run has the dialogue boxes run not from left to right, top to bottom, but in a circle, following not the natural flow of a normal page, but the flow of the heroine’s own run, following her around and around until she is ready to move forward. Even more intriguing is the use of mere words to identify the Cardinal who is in charge of the Trinity operations Lara is focusing upon. Instead of Sevy providing an actual image, Heisler instead provides a vague shape of a human being shaped from the words “the Cardinal,” identifying the person as all that they really are to Lara: an idea and a word, not an actual person that she can really picture in her head.

From top to bottom, “Tomb Raider: Inferno” #3 is a wild ride, and absolutely perfect for fans of the whole “Survivor” continuity. While some newcomers may have trouble keeping up, the artwork, colors, and lettering can help tell whatever story the actual dialogue does not, in a way that many other comics may not be capable.

Final Verdict: 8.5– Though burdened with the sheer weight of the continuity of all previous “Tomb Raider” comics and games in the 2013-onward continuity enough to make entry into this issue be difficult for any newcomers, “Tomb Raider: Inferno” #3 manages to shine through with a phenomenal emotional breakthrough alongside thoroughly intriguing artwork, colors, and lettering.