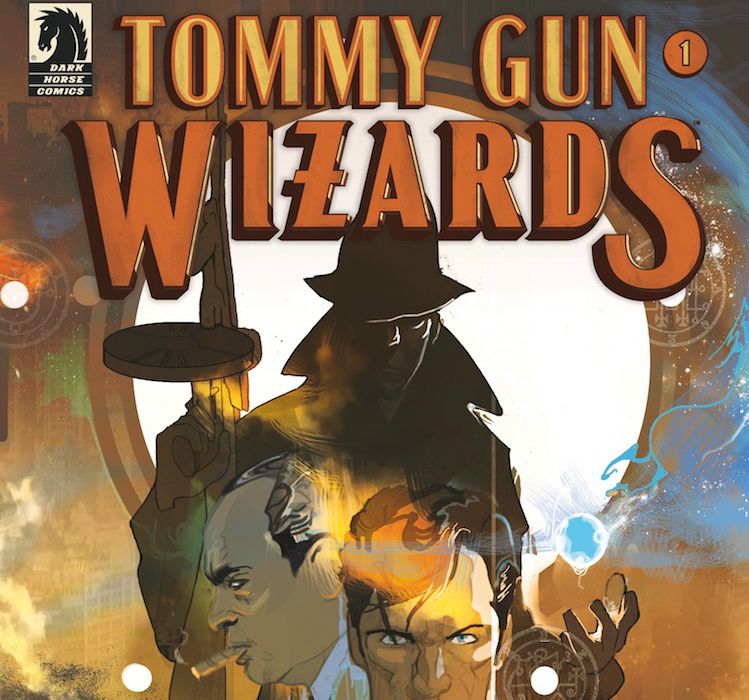 With “Tommy Gun Wizards” #1 creator Christian Ward delivers the mashup we didn’t know we were waiting for, but in the end is the concept a little too predictable? (Warning: may contain minor spoilers.) 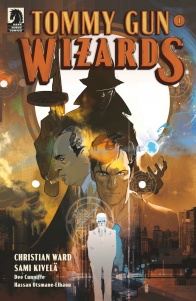 Eliot Ness and his team of Untouchables work overtime taking on dangerous criminals that hide in the seedy underbelly of 1930s Chicago. Except in this world, Al Capone isn’t dealing in alcohol, but in magic. With Lick, a drug that grants magical powers to anyone who ingests it, mobsters become wizards, ordinary men become monsters, and darker secrets than Ness can imagine lie at the heart of it all. A new genre-bending comic series from Christian Ward, artist of the acclaimed sci-fi epic “Invisible Kingdom.” Drawn by Sami Kivela (“Abbott”). Variant cover by Declan Shalvey!

In a world where “Planet of the Apes/Green Lantern,” “Batman/Elmer Fudd,” and “Archie vs. Predator 2,” are all actual comics and not mere wild conjecture on some obscure fanfic website, it seems inevitable that eventually there would be an urban fantasy series set in Prohibition era Chicago. Enter “Tommy Gun Wizards” from Darkhorse, written by Christian Ward, illustrated Sami Kivelä, with colors by Ward with Dee Cunniffe.

The title alone conjures up fantastical imagery — a bearded sorcerer in a tailored pinstripe suit and flowing trench coat perched precariously on the running board of a sleek black sedan. In one hand he wields a machine gun, unleashing a spray of hot lead. With the other, he clings to the roof. His eyes are electric blue and his teeth are bared as he readies himself to let loose a mighty fireball or bolts of white-hot lightning. — Wait a minute, am I thinking of Wizord from “Curse Words?”

No doubt, the art for “Tommy Gun Wizards” #1 doesn’t disappoint. As he already proved with “Abbott,” the urban fantasy miniseries penned by Saladin Ahmed set in 1970s Detroit, Kivelä clearly knows how to capture – and evoke – a beautifully multilayered, gritty urban milieu. Here, with well placed period details, strong lines, bold compositions, and great paneling, Kivelä creates a noirish, rain-soaked Windy City that feels both historically accurate and sufficiently otherworldly. A city under the spell of an intoxicating yet sinister magic. Chicago’s seedy underbelly isn’t merely corrupt, it’s in the grip of something far more ominous, a fact that is graphically rendered when an amorphous green blob assembles itself into vaguely human form to warn the infamous Elliot Ness, “You don’t know squat. Something big soon….”

For the most part, Ward’s script is effective, balancing the traditional debut issue tasks of worldbuilding and driving the story forward. That said, it often feels like there’s an absolute mountain of dialogue, which is especially ironic – or not? – for a comic book creator whose previous credits are almost entirely for visual art.

Moving through the book, the reader begins to sense that Ward may not trust the pictures to tell the whole story and accurately depict the world he envisions. To compensate, he peppers his already word-heavy dialogue with slang, like a novice chef who lacks confidence in the basic recipe. “Round up the perps,” says Ness, “any active lickers, put the salts on them and put them in the van.”

Lick is the slang word for magic. Or the substance that gives people magic. Or maybe it’s the thing that allows people to harness the magical forces already inside them? Like the ability to get their hair perfect every time, become invisible, or simply have really big muscles. What lick actually does hasn’t yet been defined, but it’s definitely illegal and controlled by Al Capone. Naturally, it’s the Untouchables’ job to uphold the law of the land, bring the mobsters to justice and finally restore hope to the downtrodden, crime riddled city.

Dramatically, despite the book’s clear-cut, high concept premise – with warring factions already amassed on distinctly opposite sides – so far there’s no urgency here. There are a few refreshing minor plot twists and clever surprises, but for the most part things unfold pretty much as expected, with everyone doing their job according to their predetermined role. Consequently, there isn’t much true dramatic tension. Rather, the book’s inherent conflict is baked-in right from the start. Sure, there are moments of violence and action, but the stakes aren’t very high and there’s essentially no emotional weight behind them. This isn’t uncommon, of course, in an introductory issue where readers have yet to connect with the core characters, but the roll call introduction feels way more camp than it does film noir.

Whether despite or due to the lack of urgency in the story, in his role as colorist, Ward cranks the dial to 11. The deep blue nighttime hues are gorgeous, but the chroma is off the charts, overpowering nearly everything except the deepest, darkest blacks. Most of Ward’s oranges and reds are similarly hyper intense and oversaturated. When a bar patron turns into a boiler, the colors explode into an unrelenting mix of magenta, pink, and red with only an occasional yellow to break things up.

Ultimately, the ease with which we can wrap our minds around the idea of “Prohibition, but with magic” is a double-edged sword. It’s a very likable, immediately accessible hook. At the same time, however, does that leave anywhere new for the story to take us?

Final Verdict: 7.1 With iconic characters and a pitch-perfect setting, “Tommy Gun Wizards” #1 definitely makes this series one to watch, but not quite yet on the pull list.