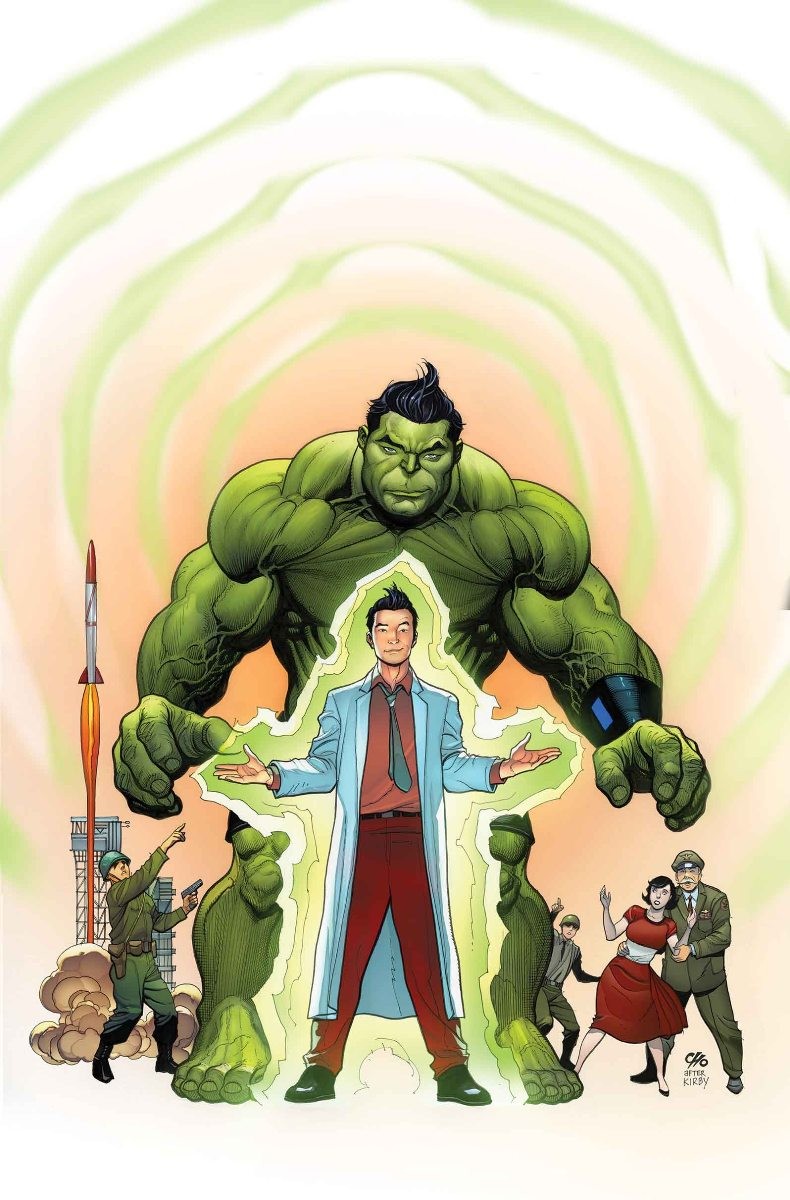 Bruce Banner is the Hulk no more! Instead, longtime ally Amadeus Cho has taken his place as “The Totally Awesome Hulk!” Does the name fit? Uh, check out the title of this article. Also, beware of some mild spoilers ahead! 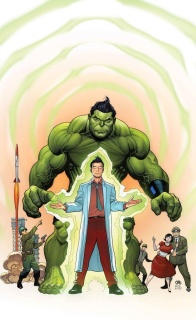 THERE’S A BRAND NEW HULK IN TOWN, AND HIS NAME IS AMADEUS CHO!

Get ready for the craziest Hulk story of the millennium as a kid genius decides he’s gonna be the best Hulk ever — and just possibly brings the entire Marvel Universe crashing down into chaos! Totally awesome beach day! Massive monster mayhem! She-Hulk and Lady Hellbender! Massive heart and ridiculous action brought to you by PLANET HULK writer Greg Pak and superstar artist Frank Cho! Is it possible for us to fit in one more exclamation point? YES!

I’m surprised Amadeus Cho hasn’t starred in more high profile books before considering he’s one of Marvel’s best young characters. Cho is a teenager (nineteen now) who also happens to be the seventh person on Earth. I think? It’s kind of confusing. Some old guy named Pythagoras claimed to be the sixth smartest but then killed himself after realizing how much of a cooler person Amadeus was. Then Hank Pym of all people showed up to knock Cho down a peg by saying he was smarter and that Cho was the eighth smartest person. So let’s just call it even and say he’s seventh.

Anyway, Cho became a huge part of the Hulk’s world by being one of the few people to actually believe in him, rationalizing that antagonizing the giant green behemoth wasn’t the best idea for humanity. Again, world’s seventh smartest person. After adventuring with literal demigod Hercules for a couple years and hacking SHIELD for the Illuminati in the build up to “Secret Wars”, Cho has decided to take on the mantle of the green giant he was looking to help. And while it’s definitely exciting to see a Hulk with youthful energy, it’s just as interesting to see what the Hulk is doing to Cho.

Even though Cho is in the top ten smartest people on Earth, he’s not always acting like it in “Totally Awesome Hulk” #1. This comic finds him constantly distracted by bikini clad women (did I mention Frank Cho is drawing this) while fighting kaiju at Virginia Beach. In fact, it’s this constant distraction around women during important fights that cause Amadeus’s sister, Maddy, to constantly remind him of how much danger he’s putting himself and others through. In fact, this problem is so bad that right after talking about how She-Hulk is actually pretty hot for her age, Cho is immediately distracted by a new villain, Lady Hellbender.

At first, I was sort of grossed out by this, frankly, hornier interpretation of Amadeus. On one hand, he’s never been asexual, but the new attitude really keeps Cho from unlocking his full potential as being a smart kind of Hulk. In case you’re not familiar with Cho, is intelligence is visually represented by the scientific formulas going on his head manifesting in the world to show the reader both how Amadeus is thinking and how many steps ahead he is of everyone else. Applying those formulas to a city-wide fight with a powered up Cho? That would have been the best. Instead, Cho just kind of hits on women and then punches giant turtles in the face. And while that’s honestly pretty damn great, it’s not really Amadeus. Which is the point.

Amadeus may not have been such a total horndog in the past, but he’s always been a little cokcy. And when the kid who has conquered demons, evil geniuses, and all types of monsters before he hit twenty gets Hulk powers? Dude’s going to let everything go to his head. Or to his, uh, lap. And at no point in “Totally Awesome Hulk” is Cho’s new attitude painted as a positive, indeed a totally awesome, trait. Bruce Banner dealt with a shit ton of demons in his life that ultimately manifested into the Hulk. And while Cho doesn’t have anything quite as drastic as Bruce’s (can’t get much worse than accidentally killing your abusive dad with your own mother’s gravestone), they’re waiting to slip him up. Honestly, putting a super genius in a Hulk body could have made Cho an almost flawless hero. But, his newfound distractions are a pretty natural personal obstacle for him to overcome as he continues his quest of punching kaiju in the face.

Speaking of Bruce Banner, there’s no real explanation of where he or the OG Hulk are post “Secret Wars.” There’s a flashback showing Banner making some sort of sacrifice but it’s unclear exactly where that sacrifice leads him. That itself is just one of the mysteries present in “Totally Awesome Hulk” (like how exactly Cho got his powers in the first place) but it’s one I’m pretty excited to see unraveled moving forward. Imagine that, me feeling compelled by a plot involving Bruce Banner. What a time to be alive.

Although I mentioned being a little skeeved out by Cho’s constant flirting with women, it’s actually played pretty well through Frank Cho’s artwork. Amadeus is still as charming as ever, giving little babies fistbumps and chowing down burgers. He’s just as charismatic as the Hulk too, and it’s weird seeing a Hulk who actually has a wide range of expressions beyond “Angry” and “Sad That I’m No Longer Angry.” Frank Cho really shines in depicting huge monster fights, but it’s the little character tics that help the characters of “Totally Awesome Hulk” feel like real breathing people.

Ultimately, “Totally Awesome Hulk” isn’t the Amadeus Cho comic I was hoping to get. The character feels different before, but the changes to his personality feel completely justified. Likewise, Cho’s artwork matches the subtlety in Pak’s script by presenting a whole lot of gigantic and visually impressive fights alongside the little moments that hint at the pathos going on in Amadeus’s head. The Totally Awesome Hulk isn’t the greatest character Amadeus Cho could be, but it’s a great building block for who he might turn into.

Final Verdict: – 8.4 – I will bet five dollars that, when Cho finally starts acting like a real hero and clears his head, we’ll see the Hulk rampage via analytic formula thing I was talking about earlier.