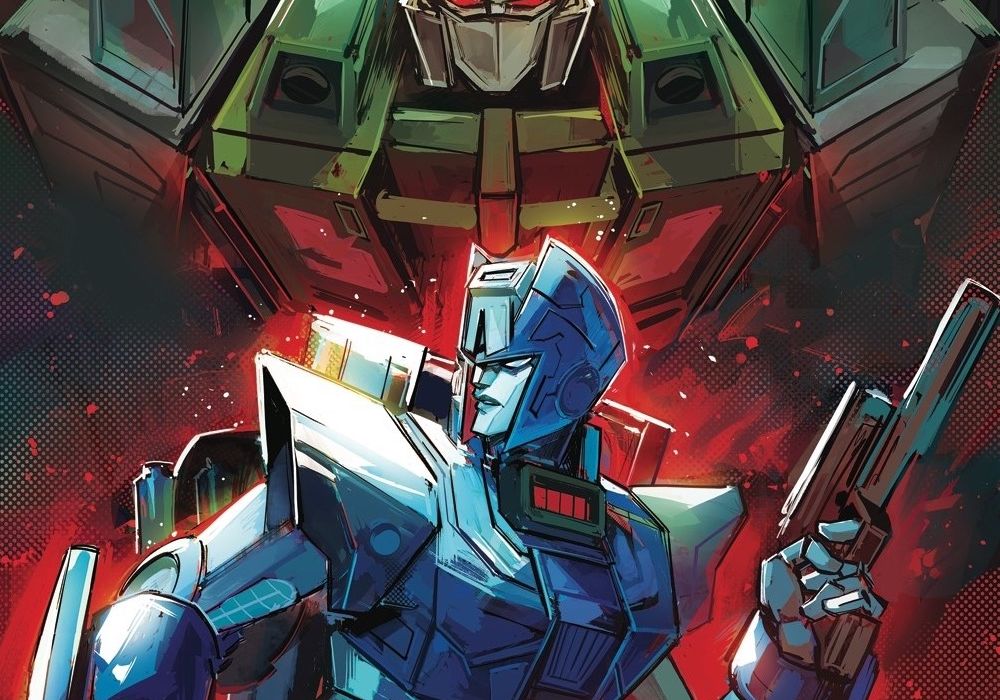 The “Transformers” series from IDW had a turbulent start quality-wise when it was initially published in March. New series author Brian Ruckley spent a lot of time reestablishing the initial conceit of the series. The new Transformers continuity takes place prior to the infamous war between the Autobots and Decepticons. Ruckley has spent the past nine issues laying the groundwork for the upcoming battle. Even with the promise of a fight, there still wasn’t a battle of note until issue seven of the series that unearthed shocking violence and changed the tone of the series. Thankfully, “Transformers” is published bi-monthly so readers got to that point in the series relatively quickly. Since the infamous seventh issue, the dominoes leading up to the war have been slowly falling and the latest installment is the closest the Transformers get to war! 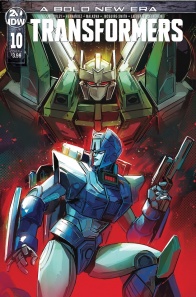 Fear spreads through Cybertron, leading more and more citizens into the waiting arms of the Ascenticon movement—making Bumblebee’s new job as part of the Guard much more difficult. Meanwhile, Chromia and Windblade follow-up on a lead, but digging up the dirt will put them face-to-face with a new foe…

‘The Cracks Beneath Your Feet’ is a series arc title that is finally living up to both the potential of the “Transformers” property in comics. This brand new arc of the series is packed with action but even offers the political intrigue missing from the past couple installments. Ruckley blends in so many different aspects of the series, making the stakes of the comic book series higher than ever before. Each scene carries a surprising level of weight and stakes that had me hanging on every single word from Megatron.

IDW’s editorial team has done an excellent job pairing a trio of artists together to tell a cohesive story in this issue. The publisher has three different pencilers on the comic book and breaks them up according to the different scenes in the issue. Due to the furious bi-monthly shipping schedule, these fast-paced deadlines could merit multiple artists per issue and the quality does not seem to be dipping across the three different pencilers.

I would prefer to see full issues from the different creators and going into the title I was interested in the pencils from Angel Hernandez who drew the debut. While Hernandez’s more cerebral pencils are an asset to the sci-fi direction to the series, it is also a relief to see the illustration work from Anna Malkova. Malkov who is able to render her figures with a more expressive look. Beth McGuire-Smith’s scenes do a great job defining the paranoia of Megatron. Out of all three artists contributing to the issue, I’m most excited about Malkova’s work. Malkova is able to render detailed characters who are also really expressive. “Transformers” artists have to draw a ton of lines on every character and Malkova doesn’t slouch on each line and provides the context of expressions as well.

“Transformers” #10 does wonders specifically for Megatron who has never come off as this interesting or nuanced in the series. After closing the pages of the installment, readers get the idea that Megatron is truly trying to establish peace through the means of violence. It is clear that his ideas are misguided and motivated with twisted logic but Ruckley actually explains why his character thinks the way he does. With Orion Pax serving as an agent for good, there is more versatility in the characterization from Megatron. Over the past couple of years of publishing, we have seen Megatron play a heroic role. It is a testament to his character and the writing that his motivation does not come off as a regression of his character.

The newest installment of “Transformers” also does a solid job serving the smaller characters and ancillary plot lines. Ruckley advances Prowl’s story right to the point where a fight could potentially break out. The script closes out the chapter and introduces a group of characters that could be instrumental to the political landscape of the comic going forward. Ruckley has closed off the group of robots and kept a relatively contained cast of heroes on Cybertron. I’m glad to see him finally break that rule as the war appears to be coming within the next couple of issues along with more Transformers.

“Transformers” #10 features the series getting back on track and adding more context to the battle before the Autobots and Decepticons go to war. I hope Ruckley will retain this impressive level of focus and foresight leading up to the big battle. If the series is willing to retain this level of high stakes, I’m fine with the title slowly leading up to the war. I hope to see a continued focus on the political state of Cybertron. The dire conversations between Orion Pax and Megatron feature the most interesting writing and thought in the “Transformers” series to-date. The expressive pencils from Malkova suited the series incredibly well. “Transformers” #10 finally packs in action with political intrigue.