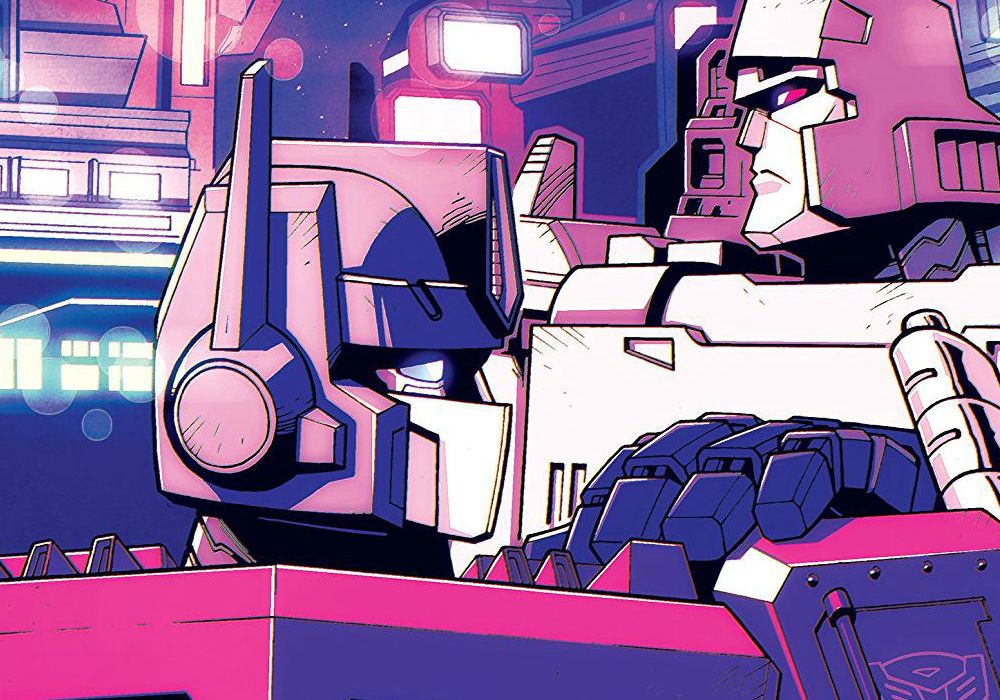 For whatever reason, I could never really get into Transformers. I don’t understand why…in theory, alien robot warriors should be right up my alley. I’ve tried again and again. I sat through the first three Michael Bay films but only liked the first. I’ve started and stopped watching the original Transformers, Transformers:Animated and Transformers: Prime. When I read that the comic line would be rebooted this year, I figured this would be a good time to give the franchise another shot. As the covers have proudly declared, it’s a bold new era. 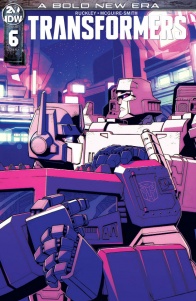 Written by Brian Ruckley
Illustrated by Beth McGuire-Smith
Lettered by Tom B. Long
Optimus takes the spotlight! Even a bot as wise as a leader of the Autobots needs guidance now and again, so Optimus turns to Codexa—a Cybertronian who has grown into the very planet itself. Will she help Optimus settle his problems with Megatron or will she lead them both to ruin?

I have to say, this new run on “Transformers” is not what I expected at all. I know the Michael Bay films are probably not the best representation of the characters but I did think there would be more explosions or epic robot fights. At the very least, I thought there would be more transforming and they would be on Earth. Instead, writer Brian Ruckley pens a story about life on Cybertron. It’s definitely been an interesting read. Then we get to this issue and I’m surprised yet again.

The past few issues have been a mix between a murder-mystery and political drama. I fully expected the story line to continue forward in “Transformers” #6. You know, I expected to learn some more clues or read of trouble brewing with the Ascenticons. Instead the story takes a bit of a detour, flashing back to when Optimus Prime (a.k.a. Orion Pax) and Megatron were close friends.

I liked the friendship between Orion Pax and Megatron. Apparently, they had a very warm, brotherly bond with one another. Sometimes friendships can feel forced but this one feels believable and lived in. It stands in stark contrast to the tense interactions the two share in the present. Megatron was actually a pretty likable guy. I genuinely have no idea how the Megatron in this issue becomes anything even resembling the Megatron depictions I’ve seen.

The art is solid throughout this issue. The tethered moon is a marvel to behold and deserves the full page it gets. The entire thing is bright purple and blue with glowing lights and whirring fans. A giant tether connects it to Cybertron. It’s so massive, it makes Optimus Prime small by comparison. It’s a pretty interesting concept that artist Beth McGuire-Smith brings to life. The same is true for Orion’s mentor, Codexa. This robot has completely merged with the planet. She definitely feels cold and eerie, sitting still amidst a mass of wires and rock.

I would imagine that drawing emotions on the faces of robots could be pretty difficult but Smith is up to the task. You feel the joy that Orion and Megatron felt when they were together in the past. You can clearly see Megatron’s anger and indignation in this issue, as well as the passion he has when sharing Ascenticon philosophy. The real feat is the way that McGuire-Smith shows Orion Pax’s sadness and pain. The Autobot’s mouth isn’t even showing, Smith makes do with just his eyes and body language. It’s more impressive the more I think about it.

The previous issues in this run have all felt deliberate and this issue is no exception. I would definitely appreciate more action but I’m getting used to the robots just talking. Besides, it wouldn’t really fit into the story here. It’s a slow-burning story and I’m sure Ruckley chose to do this flashback issue for good reason. However, “Transformers” #6 does stray away from a lot of my favorite elements of this run.

I wish there had been even a little bit of Rubble, the Cybertronian that has acted as our audience surrogate. He’s my favorite and I really enjoy the mentor/mentee relationship he shares with Bumblebee. I wish there was even a small new development in Brainstorm’s case. It’s been the focal point of “Transformers” #1-#5 and putting it completely aside is a bit jarring, even if it is for just one issue.

“Transformers” #6 isn’t particularly new reader friendly either. That probably doesn’t matter to the hardcore fans but if you don’t know much about these characters, you might get lost. I’ve read every single issue in this run and I was still confused. I have so many questions. Who was Nominus Prime? Why does Orion still have tires on his legs? Aren’t the alt-modes on Cybertron more futuristic? How much longer is a megacycle than a kilocycle? What does ‘inertia’ mean in this context? Who’s Termagax? Who was Exarchon? Why does Megatron get so upset when Orion mentions madness? We don’t even see the full schism between Optimus and Megatron. Hopefully the next issue will give us some answers.

Final Verdict: 6.0 – A long time ago in a galaxy far, far away…Optimus and Megatron actually got along.