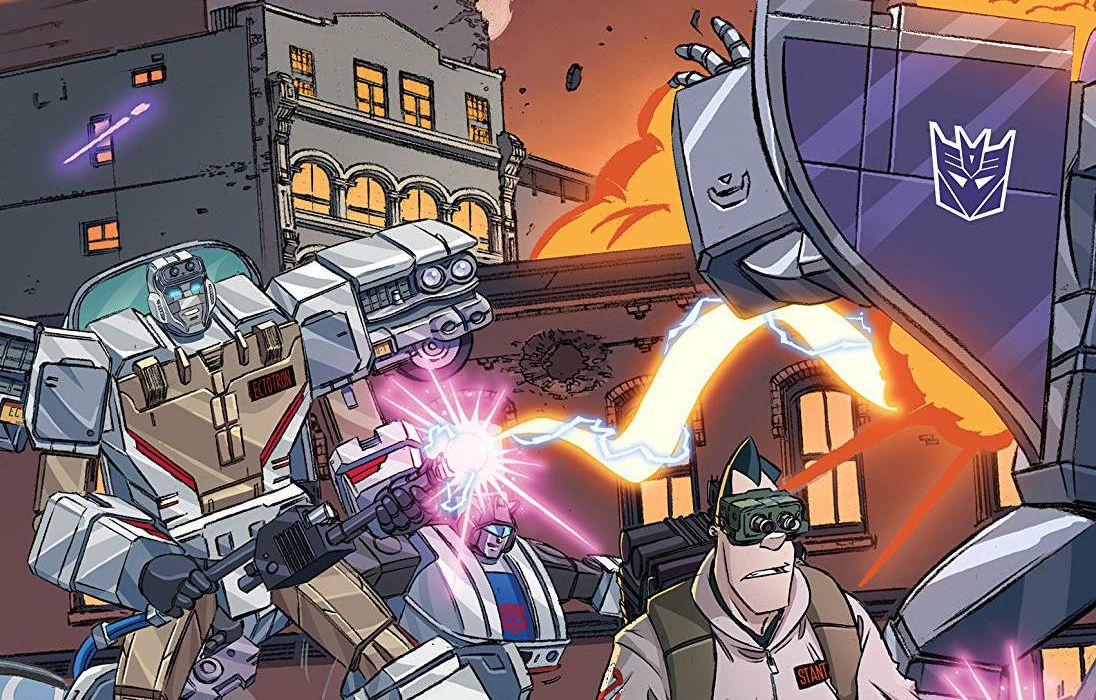 George Orwell was a few years early when predicting at what point the world would succumb to a nightmarish Big Brother state. Instead, 1984 brought with it the dawn of two iconic sci-fi franchises: Transformers and Ghostbusters. Thirty-five years later, a different kind of nightmare was born. 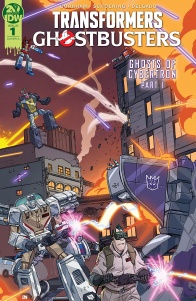 “GHOSTS OF CYBERTRON” PART 1! After years of civil war, the Autobots fled Cyberton, leaving their home planet in the evil clutches of Megatron and his Decepticons. Years later and millions of miles away, the Autobots pick up a Cybertronian distress signal from a mysterious planet called Earth. The ghostly signal shouldn’t exist, and it’ll bring Optimus Prime and his team—including brand-new Autobot ECTOTRON—face-to-face with… the GHOSTBUSTERS!

Ask yourself a question: why does “Transformers/Ghostbusters” exist? Could it be because of a bold artistic vision that Sony and Hasbro felt compelled to share with the world? Well, maybe. But probably not. There is no logical storytelling purpose behind the crossing over of these two intellectual properties, nor is there any profound meaning to the story that follows. The truth is that while eighties nostalgia isn’t quite as potent as it was a couple of years ago, there’s still a lot of interest in properties born of that era. As such, boiling this book down to its base ingredients will leave you with one-part fan service and one-part lust for money. Does that mean it’s bad? No, it’s perfectly fine but the value of this opening issue doesn’t extend much farther than basic novelty.

The action opens on Cybertron with a scene that borders on farcical comedy. While it’s an entertaining homage to the iconic finale of the first Ghostbusters movie, the juvenile scripting means it isn’t anywhere near as sharp as it could be. In fact, that’s a criticism that could be leveled at the characterization in general. While it’s clear that writer Erik Burnham has made an effort to craft fun dialogue for characters from both franchises, neither really sticks the landing. This reviewer lacks an in-depth knowledge of the Transformers universe and so can’t comment on how faithfully this issue depicts it, but certainly the return of the original Ghostbusters team proved disappointing indeed.

Their incessant bickering and banter just wasn’t funny and felt very much like a writer trying too hard to capture the playful spirit of their cinematic outings. This was helped little by Dan Schoening’s artwork which in many panels made it difficult to distinguish between Ray Stantz and Peter Venkman, a genuine inconvenience when trying to follow their fast-paced verbal sparring. The character that fares best of the bunch is Egon, but given his deadpan matter-of-fact persona perhaps that isn’t surprising.

While the character models leave something to be desired, there are some nice illustrations in this issue. All ghost-busting tech looks suitably authentic and one particular page where the team use their proton packs against a gigantic enemy, looks like concept art from some glorious third installment that never was. Generally, the Transformers fare better in their transition from screen to page, with Schoening adopting the bold block style of their cartoon incarnations, thus giving each an obvious visual identity. A bit more flair could have been given to the Cybertron setting as well as that of the Autobot ship, but as relatively little time is spent in these settings their lack of detail is excusable.

As for the plotting itself, this issue gives no major insight into what exactly the broader story of this miniseries will be. Besides setting up the major players and eventually crossing their paths, there isn’t much in the way of genuine progression. In fact, you could go as far as to say that “Transformers/Ghostbusters” #1 is effectively just a prologue to whatever is coming next. Of course, there’s nothing inherently wrong with a story that takes its time, but ultimately this issue isn’t compelling enough to justify it. Aside from brand loyalty, there is little to entice the reader back for next issue.

But then again, perhaps it depends on what you wish to get out of this crossover. This book has a daft plot that utilises pale interpretations of these famous characters to construct a simple simulation of how absurd it would be if they met. But if you’re of the mindset that such crossover nonsense shouldn’t be taken so seriously, then this may well be enough to satisfy you. The issue does have a handful of fun moments, particularly when the Decepticons come into contact with Ghostbusters tech, meaning there’s enough fan service here to keep the die-hard readership appeased.

However, any hope that this crossover could be something more than that is lost essentially from the first line of dialogue. While there’s nothing about this issue which is offensively bad, it does feel like the apotheosis of eighties romanticism. What started as film and television aping on the style of the decade has now evolved into plucking two properties at random and mashing them together. It just reeks of a cynical cash grab and the lack of substance to be found in its pages does nothing to refute that. Suffice to say: unless your obsession for both of these franchises errs on the side of unhealthy, there’s really no reason to spend your time or money on this series.

Final Verdict: 5.0 – “Transformers/Ghostbusters” is what happens when eighties nostalgia goes too far.