Even though a new status quo needs to be established for the main Lost Light team, the issue already thrusts Rodimus, Megatron and the full crew into an alternate reality. The idea is a fun notion, but Roberts might be taking on too much plot here in too little time. This issue could have easily been a follow-up to the last, addressing some of the new relationships between the various crew members, touching on more of the fallout from “Transformers: More than Meets the Eye” #55. This might be the Transformers comic that has the single largest cast of characters and trying to devote time to each crew member can be next-to-impossible. The ambitious series is even introducing more former Lost Light members in this issue, meaning that Roberts and crew are going to have even more to juggle going forward. 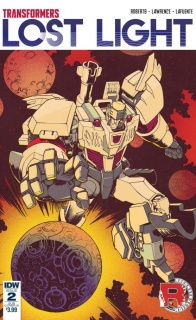 While “Transformers: Lost Light” #2 has a nice a punchline tying the series back together to the last 55 issues, most of the comic feels like author James Roberts and illustrator Jack Lawrence are still trying to establish why this volume is different from the last. Instead of pushing the plot of this issue forward, the creative team takes an unexpected detour that is enjoyable enough, but shows that this issue and series might not have enough focus on one group of characters for readers to get invested in this side story.

“Rodimus and Co. find themselves in a dangerous place. Even more dangerous than on a planet that exploded from the inside. That’s already pretty dangerous. But where they are now? Oh boy.”

Going into uncharted territory and doing something so unexpected is a hallmark of the series and is exactly why this issue still does align with the rest of the issues. There’s also something novel about this utopian Modern Times-esque world that the crew is stranded on where your alternative transformation is everything. Unfortunately, Roberts doesn’t seem interested in exploring the world far beyond what is narrated to the reader towards the beginning. The last page of the issue already introduces another twist that will changes the focus of the issue slightly.

This comic certainly isn’t bad, but the massive cliffhanger introduced 10-issues ago still isn’t resolved. I can hardly wait for what this comic has coming after this storyline is finished. The issue also stumbles in its focus. Currently the comic divides attention between three sets of characters. While this may read fine in a collected format, it’s hard to feel the tension of any specific story in this issue when focus is shifted between parties so rapidly. One really wonderful character moment that happens late in the issue breezes by because the focus of the page before and after are on a different group of characters.

After the hyper-detailed art of pencillers like Nick Roche and Andrew Griffith, Jack Lawrence’s style is still taking some getting used to. The artist’s new approach to the Lost Light heroes brings an entirely new tone to the series which seems to capitalize less on melodrama with the new installment so far. His art is well suited to this story-arc which doesn’t have the highest stakes this series has seen before. Lawrence seems to have a strong understanding of Roberts’ sense of humor, which is depicted nicely with characters having strong reactions to their captivity. The artist’s facial expressions capture what the robots are feeling quite nicely. Lawrence gets a chance in this issue to draw his most dramatic scenes yet with a quiet, tense moment with Cyclonus and Tailgate. The issue takes an unexpected more dramatic direction towards the end that Lawrence’s subdued approach makes more profound and Roberts wisely drops the rest of the dialogue in this scene.

Roberts goes out of his way to make sure each bot on the crew has their big moment. Even though Rodimus barely gets any attention, we still understand that he’s shaken from losing his ship and scared from the huge battle the team just fought. Megatron is a still a pacifist, but now he may just be learning how to lead a team without going into battle. Had this issue slowed down the conflict and only a focused on a few characters, Roberts may have been able to better establish the stakes and world of this current conflict. Roberts’ introduction to exploring how Transformer’s feel inadequacy based on what kind of alt-mode they have is a really interesting way to explore how robots feel shame just like humans.

While this is not a bad comic, the issue’s focus seems divided. With so many groups of characters, Roberts could easily zoom in on the more important heroes in the series and still have this comic excel amongst the rest of the Transformers line as a hole. Roberts has said that this is the beginning of season three of this storyline and with the huge finish of the past two seasons, this story is likely just getting started. This is also the issue where Lawrence seems shows off his talent, nailing two dramatic scenes, showing off a different side to his pencil style.

Final Verdict: 6.8 – Roberts and Lawrence take a middling detour on the Lost Light crew’s battle to get their ship back.