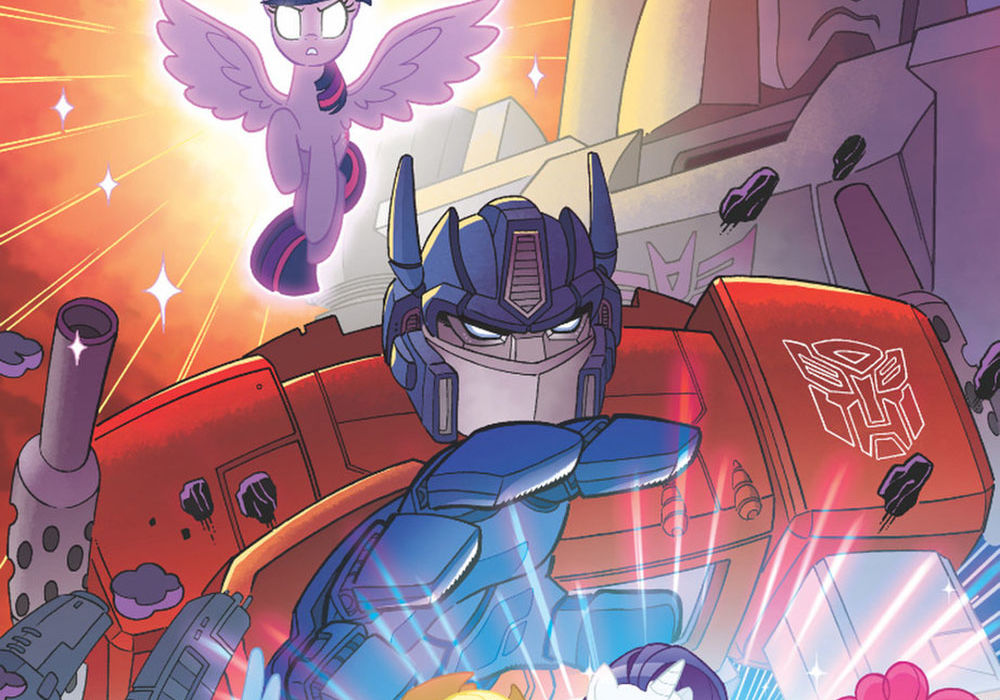 The boundaries between “boy toys” and “girl toys” is a pretty solid one with not a whole lot of chances for crossovers. While it’s well known that if young boys and girls mix together it causes an inescapable “cooties” outbreak that can only be contained with the most aggressive vaccination program, this separation is felt much more closely in the boardrooms of the toy companies that crank out all the plastic toys and games that we give to our children to play with.

However, someone at Hasbro probably thought it might be funny or interesting to see what would happen to sales if boy toys and girl toys were forced to play together and decided that the best way to find out was to take their two most popular franchises and mash them together.

And while I can’t comment on the boardroom politics of Hasbro, I can comment on the end result: “Transformers My Little Pony Friendship in Disguise”. 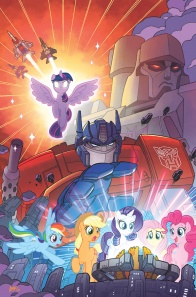 When Queen Chrysalis casts a spell looking for more changelings, she accidentally interferes with a malfunctioning Spacebridge! What’s this mean for our favorite fillies? There are suddenly a bunch of Autobots and Decepticons in Equestria! And as the dust settles, Rarity and Arcee find themselves teaming up against a hostile Decepticon force…

“Transformers My Little Pony Friendship in Disguise” #1 is actually two comics for the price of one. The first story is a set up for the entire crossover entitled “Transformation is Magic”, showing how two entirely disparate universes can come together in such a way that makes sense. Basically, the evil Queen Chrysalis tries to bring allies over to Equestria in order to aid her battle against the other ponies. Unfortunately, it turns out that Chrysalis’ magic is interacting with a malfunctioning space bridge in the Transformers universe, causing the Autobots and Decepticons to be brought over and continue their ongoing war on Equestrian soil.

The second story is titled “Shine like a Diamond” and follows Starscream as he attempts to become the king of Equestria, but is beaten back by the combined efforts of Autobot valor and Equestrian magic. It’s not a very long fight, because while Starscream is a jerk, he is also a massive coward.

Out of the two stories “Transformation is Magic” is more self aware and has a sense of humor that is more tuned for older fans and adults. Writer James Asmus does a very good job of making this crossover work in a relatively believable way and once the Transformers are brought into Equalia, Asmus does a very good job of having both sides process what’s going on and establishing the relationships between Changelings, Decepticons, Autobots, and Ponies with very limited time and space. It’s a story that is filled with self aware jabs at both franchises coming to grips with each other’s differences and sets up future personality clashes very well. Plus, the ending shows a black unicorn riding a tank into battle, which is just awesome.

“Shine like a Diamond” is the more complete story and has some really good character moments that allow the Transformers and Ponies to play off their franchises and develop a bit more. Writer Ian Flynn has the transformer Arcee defeating the cowardly Starscream in order to rescue the unicorn Rarity and her fashionista ponies. Presumably, this was a crossover that was demanded because they’re both “girly” with lots of purple and pink. However, Flynn does a lot to go beyond the superficial in this story and actually uses the two characters to bring up some interesting points. While they both become fast friends and are accomplished women in their respective fields, Arcee actually offers a brief glimpse into how a lifetime of near continuous war can affect someone’s worldview, which is countered by Rarity’s ready willingness to become close friends with this new pink robot. It’s a very sweet and pleasant story of how friendship can blossom, even in the midst of conflict and crossovers.

If there isn’t a whole lot of discussion about the artwork in “Transformers My Little Pony Friendship in Disguise” #1 it’s because the nature of the licenses for both properties probably had a much larger hand in the look of the comic than the artist’s personal tastes. These are both properties that have spent decades developing and maintaining a certain look and feel to their characters and it’s the same with the comic. With that in mind, artists Tony Fleecs and Jack Lawrence do a great job of maintaining the brand and offering plenty of energetic and dynamic action in their respective stories. The colors are bright, the energy is high, and everyone looks like what they’re supposed to look like.

If there are any differences in the art styles they are pretty negligible. Fleec’s art style on “Transformation is Magic” appears to skew a little bit younger and has a lot more going on in terms of bodies on the page and frenetic pacing and motion while Lawrence’s artwork on “Shine Like a Diamond” appears to be a bit more technically capable and looks like it could be a storyboard for a cartoon episode. Still, these are very small differences that you really have to look for and shouldn’t distract from a very good comic.

“Transformers My Little Pony Friendship in Disguise” #1 is a fun crossover comic with two iconic franchises that have been given new life in recent times. If you’re a Transformers fan, you’ll enjoy the action and seeing Starscream getting the crap kicked out him for the millionth time, and if you’re a My Little Pony fan you’ll enjoy all the bright colors and whip smart dialogue that is perfect for adults and kids alike.

Final Verdict: 9.1- You wouldn’t think a crossover like this could work, yet here we are.