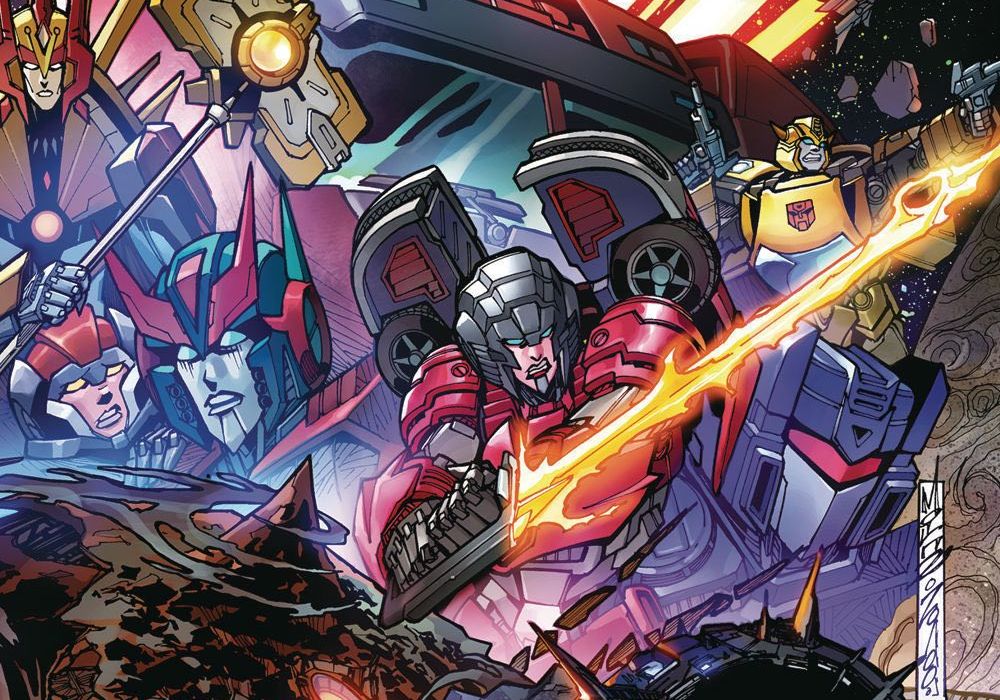 “Transformers: Unicron” #1 marks the end of publisher IDW’s long-running Transformers Universe. 2011’s “Transformer: The Death of Optimus Prime” #1 ushered in the end of the Civil War between the Autobots and the Decepticons. The new status quo allowed for the shared universe to continue on a new path. Unicron is the beginning of a new threat coinciding with the end of the current mythology. The title is written by IDW’s current Editor-in-Chief John Barber with art from Transformers veteran Alex Milne. The publisher’s recent offerings such as the Free Comic Book Day special first started to set the stage for the villain. Barber and IDW now have the important job of defining and giving shape to Unicron. 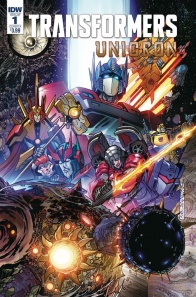 The end is nigh! The Darkest Hour has come. Optimus Prime stages a desperate gamble as the world-eater, Unicron, approaches Windblade’s homeworld-but that’s just the appetizer. The main course is Cybertron (with a side of Earth)… and it’s starting to look like no force in the galaxy can stop the end from coming.

Unfortunately, “Transformers: Unicron” #1 spends far too much time recapping the threat of Unicron. The script largely seems geared towards setting the stage for a larger battle still to come. Barber spends so much time setting up the new adversary, he does not get the chance to properly introduce the cast. The caption boxes from Prime at the beginning of the issue detract from the pacing and tension in the story. The language in the captions is confusing and also bears the burden of explaining the plot to the reader.

This issue features a tense battle between Unicron’s Maximals and the remaining forces of Cybertron. However, the Maximals threat is so poorly shaped in the confines of the story that real stakes are not established in this script. Towards the end of the issue, Optimus Prime switches venues in a choppy manner and explains to the cast why the threat is bad. If we believe what Prime is saying, this is a monster threatening the Universe. Barber struggles to communicate the full threat of Unicron. No amount of Prime explaining the plot of the issue to the reader is going to define the scope of this series. The issue does have a brief moment when Prime, Arcee, and Bumblebee corner Unicron’s ship that picks up the pace. However, the choppy scene transition and quick resolution to this narrative derail the momentum.

The art from Alex Milne can be slightly scratchy and indistinguishable at times. It also can be difficult to tell where one Transformer ends, and another begins. There is an absurdly large amount of cast members in the issue. The cast includes the Transformers on Earth that Optimus prime recently annexed and the Transformers of Cybertron. Trying to discern between the established heroes and Unicron’s Maximals is impossible at times. When the issue scales down the number of characters, Milne gets the chance to add in exceptional detail. Towards the end of the issue, Prime’s battle damage gives the issue an epic sensibility. When Milne gets the chance to draw one Decepticon on a splash page, he’s able to fill in all the pieces of detail. Overall, the art within the issue is strong especially when the number of characters on-panel is scaled back.

The larger supporting cast of the issue has a nasty habit of lingering in the background without serving a larger purpose. It also can be difficult to tell dialogue apart from someone like Arcee versus Soundwave in certain panels. Barber tries to give Soundwave a small moment of characterization where he attempts to reach out to a Maximal. Prime quickly explains he is foolish for trying to make talk sense into him. This could have been an important moment yet Barber doesn’t reveal anything about either character that readers don’t already know.

The final moment in the issue comes out of nowhere and is introduced haphazardly in the second-to-last scene. If Barber used a framing device or introduced this story element earlier, the beat would have felt more earned. However, the odd cliffhanger broke up the pacing and featured an element of emotion allowing me to connect with the story. Prime’s personality and interaction with the supporting cast of this story felt too calm and collected here.

Barber’s tendency to write a more static Prime detracts from some of the personality an epic comic book event needs. The issue’s refusal to explain the larger threat surrounding by anything but the dialogue is a disappointing choice. When there are minimal story elements on the page, Milne’s art excels with detail. In order to give a proper send off to a Universe of comics “Transformers: Unicron” must find a greater sense of focus and personality.