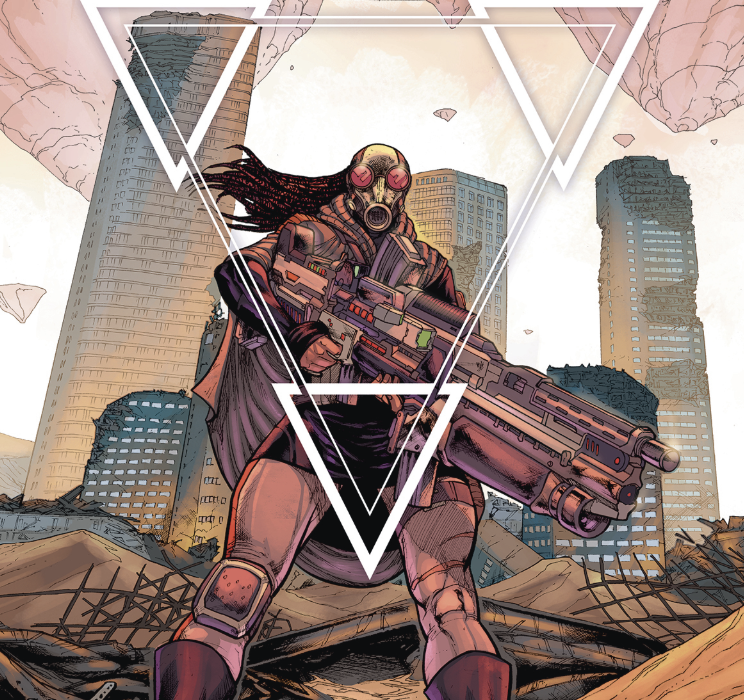 “Triage” #3 goes in hard on its current pace with another location shift, but misses the mark when it comes to character development. Warning: spoilers ahead. 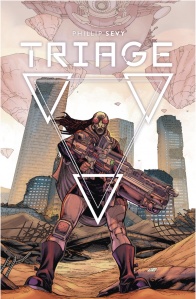 Cover by Philip Sevy
Written & Illustrated by Phillip Sevy
Lettered by Frank Cvetkovic Evie, Marco, Orbit, and Tab are forced to jump dimensions during an intense battle with Hunter, leading them to Marco’s desert homeworld where her outpost is currently under fire. As Evie tends to Marco’s pregnant partner’s delivery, Tab must help Marco fend off the marauders that threaten their safety.

“Triage” #3 is the latest installment of a comic that’s trying very hard to balance action and character-building. Sevy works to maintain Evie as the focal point of the story while giving Marco and Orbit their fair share of screen time, and upping the romantic drama between Evie and Tab. However, there’s not too much room to go deep in the midst of a dimension-hopping chase narrative, and Sevy’s efforts don’t entirely land.

Sevy’s concept is intriguing. “Triage” looks at the life of a woman who’s on leave from her job and unsettled in her relationship when said life is upended by a cosmic-level conflict and a few alter-egos along the way. Sevy puts in some work on Evie’s personality: she’s frustrated with her job but is a natural caretaker, she loves Tab deeply and she felt lost before her world was turned upside-down. She’s compelling as a narrator, but we start to stumble into some muddy territory when it comes to her general indecision and need to break up with her girlfriend. Given how quick the action trips along, it’s not entirely believable that Evie would have the mental space or capacity for unbroken narration, even in the quieter moments. It feels a little scripted, and while the intention might be to provide a steady focal point to balance the art, it doesn’t always work that way in practice.

Sevy also jumps a little too far ahead in terms of believability in the plot itself. In this issue, the four women end up on Marco’s homeworld, which allows for a few moments to flesh out the post-apocalyptic landscape. Evie then enters the infirmary, where Marco’s partner is giving birth – without Marco, inexplicably. Her partner fills in some of Marco’s backstory with dialogue, unfortunately, and the whole moment feels a little bewildering and forced. It’s not clear why this scene is important, especially because Marco is off somewhere else, and the intended lyricism of war pulling people apart doesn’t entirely fly. Neither does the scene immediately afterward, which ends in a cliffhanger of Tab and Marco kissing each other while Evie looks on in horror. The sequence is meant to play with identity, stress, trauma and relationships, but it feels rushed and more than a bit stilted thanks to how it’s compressed into largely static scenes in set locations. Paced as it is, Sevy’s doing a lot of work very quickly to try to build drama and fill in some character-building gaps that doesn’t necessarily pay off.

As for the art, there’s a fineness to Sevy’s line that works well in close-ups, especially of character’s faces, but blurs at the edges in larger action scenes. Character design is interesting enough. Orbit, Marco and Evie all come from very different worlds, but their resemblance is clear without inciting a feeling of copies or cut-outs. Their hair, clothing and mannerisms are all shaped by their lived experiences, and it definitely shows and goes far to endear the characters as believable. Sevy’s style goes more for realism in its anatomy but struggles with a level of detail that can flatten certain scenes on the page. The book occasionally feels stilted or confused because there’s not any particular rhythm to its layouts – panels feel almost spilled across the page rather than placed with intention, and that can upset the mood Sevy’s trying to build. Still, Marco’s homeworld is visually interesting, and the spread reveal does a lot of good visual storytelling before Marco’s dialogue kicks in later to fill in the gaps.

The color palette is varied: Orbit boasts a lot of neons and bright pops that suit her punchy persona and actual punchiness, while Marco’s earth tones speak to the need for constant concealment, economy and practicality. Evie straddles both of these extremes, with a haircut that’s charmingly expressive in moments of tension and peace and a few bright color details in her wardrobe. Some single-color backgrounds feel like they’ve been chosen for contrast, which is a good way to make a moment or reaction stand out, but not chosen to harmonize with the overall feel of the book. Marco’s called out in a bright, neon yellow and again later in red, and both of those moments feel a bit overdone because they’re too jarring. Cvetkovic’s lettering is economical, and there are a few good sound effects – one in particular bleeds down the page into a balloon pretty well – but it’s otherwise unremarkable. When it comes to lettering, that’s not necessarily a bad thing. The book’s readable and there aren’t any confusing moments, but there’s a missed opportunity here for some extra bells and whistles to help sell the book’s concept.

Overall, “Triage” struggles not because it’s not trying, but because it’s trying a bit too hard and cutting some emotional corners in the process. Evie and Tab’s relationship is important in the narrative because we’re told it is, not necessarily because we’ve been shown enough at this point. The parallel storytelling of Evie delivering Marco’s baby while Marco kisses Evie’s partner would work well further down the line, when we’ve had a chance to see more of Evie and Tab out of their elements as a contrast to how they’ve functioned before. As it stands now, it’s a bit of a stumble that, combined with other pacing issues, makes the tension in “Triage” feel slightly unearned.

Final Verdict: 6.5 – “Triage” #3 hops ahead in the action a little too fast to support its character revelations and dramatic tension.