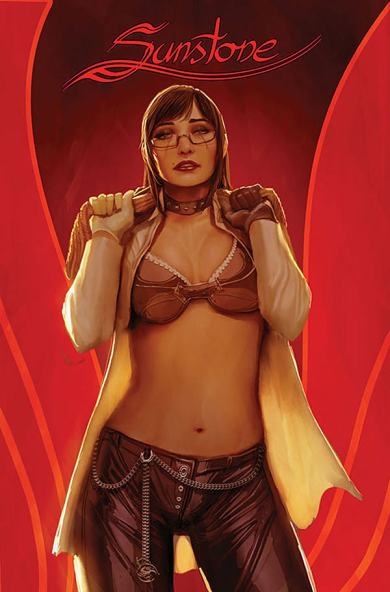 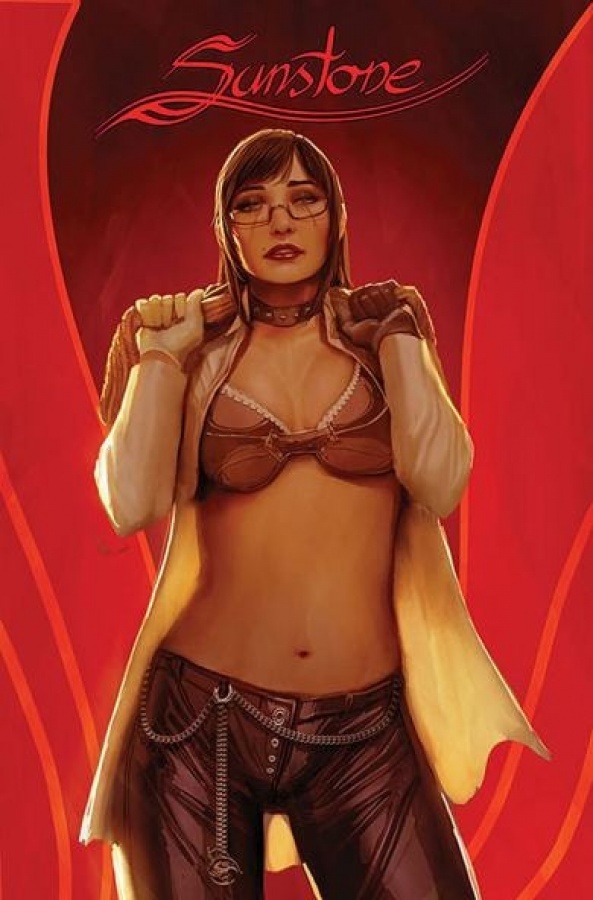 STJEPAN SEJIC continues the critically-acclaimed SUNSTONE series. A classy, sexy, fun, and emotional look at two women and the alternative lifestyle they live.

“Sunstone” is the anti “Fifty Shades of Grey” because it doesn’t take itself too seriously and it doesn’t feature female leads willfully taking part in abuse. Lisa is a submissive in the context of BDSM role play but she’s doing that by choice. Her partner Ally respects her in every way and in a great contrast, Sejic  has situated her as the lead of this whole story. She’s the narrator and she’s the one who gets Ally to open up about the situation with Marion. He’s known mostly for his artwork but he’s an extremely capable writer who can craft a cohesive story that emotionally resonates with readers while still making you laugh. He’s got a wicked sense of humor and he uses it in his writing. There are lots of jokes to be had and it could easily slide into something crude but Sejic looks for the laughs that come in weird situations. It’s all done very naturally.

“Sunstone” Volume 2, obviously, features gorgeous artwork. Sejic is great at doing a lot of different things but I don’t know if he’s doing anything right now as well as “Sunstone”. This is on a whole different level than “Death Vigil” or even his couple of issues “Rat Queens”. What sticks out so much immediately is the texturing of the clothing. Leather and latex aren’t easy things to draw because of the way they catch the light. He’s able to convey that light catching property without putting his characters in silly shiny clothes. The designs of the outfits are also really varied and actually sort of fashion forward. Sejic taps into some of the biggest fashion trends; specifically with Lisa’s one shoulder gown. They also all look comfortable which is probably the biggest accomplishment from a practical standpoint. The characters visibly can move around without doing anything that seems physically impossible despite wearing all that leather and latex. It’s evidence of research and an artist who cares about detail. Speaking of details, the way Sejic separates panels on some pages is very cool. He uses ropes instead of lines at certain points and it’s a nice little added detail that deserves some attention. Sejic does this whole book from writing to coloring on his own. It’s a huge amount of work and for him to add those extra things just blows my mind.

“Sunstone” Volume 2 is like Friends but with a lot more sex and it’s not going to be for everyone. I do think it deserves a chance to win you over because it is a lot more than sex. This is at its core a story about relationships ranging from friendship to romance.

Final Verdict: 9.0 – Beautiful, romantic and artistically stunning. “Sunstone” is controversial but worth every penny.