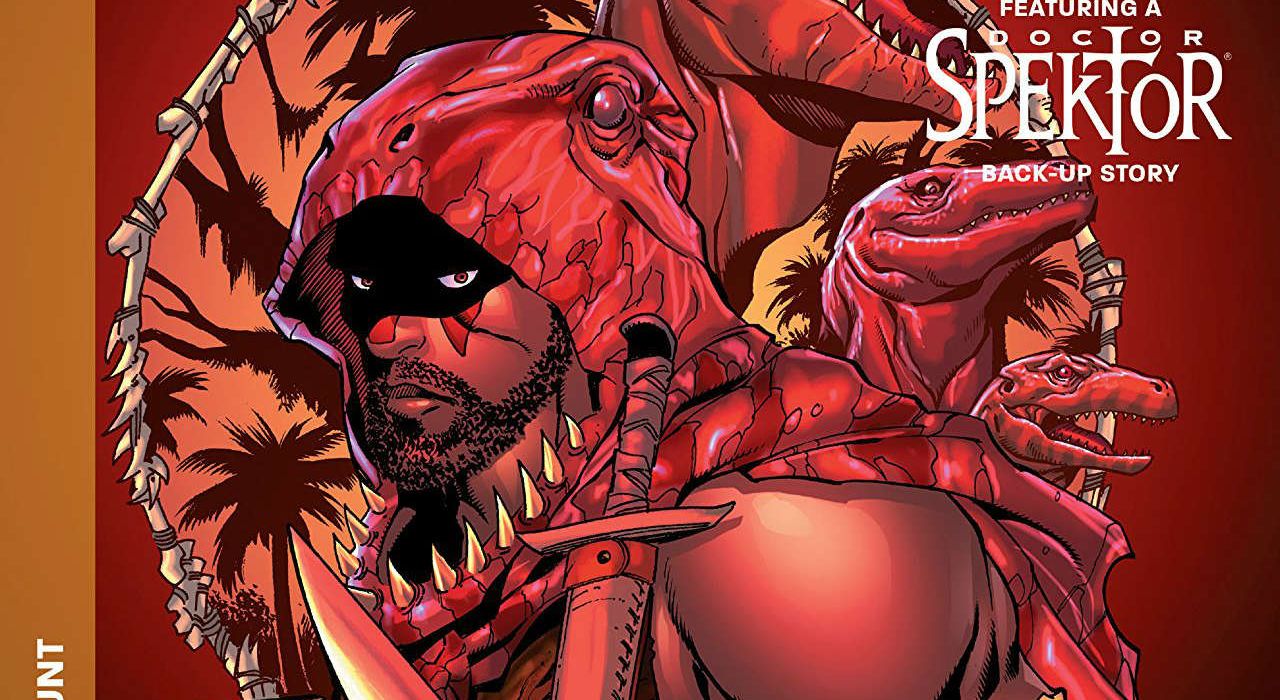 The classic Gold Key character, Turok the Dinosaur Hunter, has been through the wringer in his publication history. Having been rebooted over and over again at different publishers, Turok now finds himself in the middle of a Dynamite Comics overhaul, with a new jumping on point and creative team. Can they find the winning formula that gives this character relevance again? 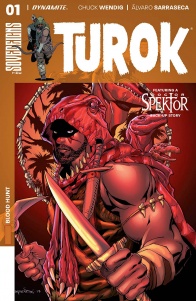 The fascist Saurian soldiers of the Varanid Empire – part dinosaur, part man, all bad news – have seized control of the Lost Valley, and only the mysterious man known as Turok is willing to stand against them! But the all-new Turok only cares about one thing: he’s on a quest to track down a missing girl – and she might hold clues as to how the Lost Valley has changed so much! Now Turok must infiltrate a prison camp run by the Varanid Empire in order to get more information about her whereabouts – and beware, any Varanid soldier who gets in his way – because there’s a reason they call him the Dinosaur Hunter! Also: Doc Spektor, Part 2! The story of the all-new master (and we use the term lightly) sorcerer continues… as Doc banishes a demon from an Upper-East Side apartment AND commits fraud – all in a day’s work!

Wendig appears to be taking this series in a Mad Max meets Jurassic Park direction, and I love it. Readers are thrust into the rollicking prisoner wagon bearing Turok (and his eventual supporting cast) without further context. It’s disorienting, but in the best possible way: readers are given as much information as the prisoners are about their location, leaving room for speculation and a sense of mystery about the setting. It’s almost reminiscent of the opening to Skyrim in that Turok works as an avatar for the reader to take in the world around him, while a mishmash of cultures bicker and fight around him.

In regards to accessibility, I myself am only familiar with Turok through playing the N64 game when I was younger, and found myself easily following the pacing. From what I understand, the reading experience would be deepened by having read the “Sovereigns” series prior to this, but I really like the feeling of being thrown in the deep end here. Wendig doesn’t bombard you with information to make you comfortable, and it implies a sense of unease that something completely unexpected could be around the corner. Similarly, those who aren’t familiar with the character are given a rundown through other people fawning over him. One of the other prisoners, a ‘pigblood’, tells his friend tales of Turok, hoping to inspire him to rescue him them from the wagon. There’s some pesky inner monologue from Turok weaved throughout this, which feels a little indulgent and unnecessary; however overall it’s a great method of second person storytelling.

The characters are all engaging, and Wendig uses the inciting incident to thoughtfully introduce a supporting cast for Turok. Marak and Nettle are, on a surface level, pretty standard sidekick types. However, each has little quirks that make them interesting. Marak’s Shakespearian dialogue mixed with his flamboyant, rebel attitude makes him stick out from the other Pigblood and Saurian people. Nettle works great as a grounding counterbalance to Marak’s enthusiasm. Her cynicism and reluctance has her feel even more compelling than I’m sure she wants to be. However, the villains are a little vague and generic from their debut this issue. The Varanid Empire, as a whole, are an intimidating force, but the main villain, Overseer Nagyakka, falls short. He’s more of a generic, moustache-twirling mad scientist fellow. To make sure subtlety was blown completely out of the window, Nagyakka also sports a nice red bicep band atop his sheer black military button-up. The motives are vague other than ‘feeding the empire’, although I have faith Wendig will expand upon this in later issues.

Alvaro Sarraseca has a stylish, clean style that brings a lot of kinetic energy to this book. His body work is so definite and confident, the books seems to be in perpetual motion with each passing panel. This isn’t a fast-paced book, set in its action, but each motion feels like it bears a heavy deliberation. When Nettle jumps on the back of the Saurien to pinch his pressure point, it doesn’t feel frantic, but rather calculated and precise. Similarly, when Turok fires a warning shot to the window Nagyakka stands in, you can practically feel the taunting dripping from the shot as he loads his bow and engages in a dramatic stare-off with the villain. It’s smart storytelling that doesn’t need to rely on fast pacing to deliver exciting storytelling.

Sarraseca accompanies Wendig’s worldbuilding perfectly, right from the start. When we’re thrown into the first page, Sarraseca adorns the panels with sunken pirate ships in sand, triceratops with automobile passenger sears, and fly-ridden corpses hanging from trees. Each addition sets up the scene tonally, and does the heavy lifting of narrating the setting without bogging the reader down with dialogue. It’s the most intense environmental setting in the whole issue, as most of the story occurs on the prison wagon, but it’s so grippingly believable that you never wonder where the narrative is occurring for the rest of the issue. Sarraseca makes the scene changes, when they occur, very deliberate. The environment changes from wide open barren land, to claustrophobic, sterile futurism within the blink of an eye, but the reader never feels bewildered.

The limited yet eye-catching coloring of this story is a big part of this story, and Triona Farrell uses a lot of techniques to convey this unique storytelling. Most scenes in the story operate around a restricted color palette, something that feels both thoroughly modern and a throwback to the excellent original Gold Key comics of the past. The desert scenes are a wash of oranges and browns, however the colors are vibrant and pop with a stark nakedness, ensuring that “Turok” can’t be relegated to drab, gritty reboot status. The indoor scientist scenes are a mix of uneasy greens and cold greys, which do a lot to set tone in these scenes. It makes the Nagyakka introductory scene feel even more intimidating and villainous, regardless of how cheesy the scripting is.

Aubrey Sitterson and Dylan Burnett contribute a short “Doctor Spektor” strip at the back end of this issue that’s a great light-hearted trip to see readers out with a good time. Sitterson delivers his trademark wit with Spektor, having him come off as a happy-go-lucky Constantine who’s down on his luck, but always looks for the positives of a situation. Burnett pens this to a T, Spektor is a shaggy, scruffy ball of fun in every panel he appears in, even when his pupils are whitened out in a dramatic show off with Paimon, King of Hell. The action is smooth and seamless, and works as a great self-contained chapter, even considering this is a part of a larger whole.

“Turok” #1 is an unsuspecting little number. Dynamite are putting some serious talent on this latest Gold Key revival, and it makes for a great, post-apocalyptic style story in this issue. Wendig delivers a great, pseudo-mythical character in Turok, giving him a dynamic supporting cast and engaging setting to thrive in. The villain may be a little cackling and generic, but the debut is so engrossing that it doesn’t hurt the quality a lot. To top it off, Sitterson and Burnett deliver a super fun Doctor Spektor strip that highlights the comedic and supernatural qualities of the character. What more could you ask for in an opening issue?

Final Verdict: 8.7 – The Dinosaur Hunter makes his latest debut in sleek style, providing a great jumping on point for new readers and breathing new life into an old franchise.