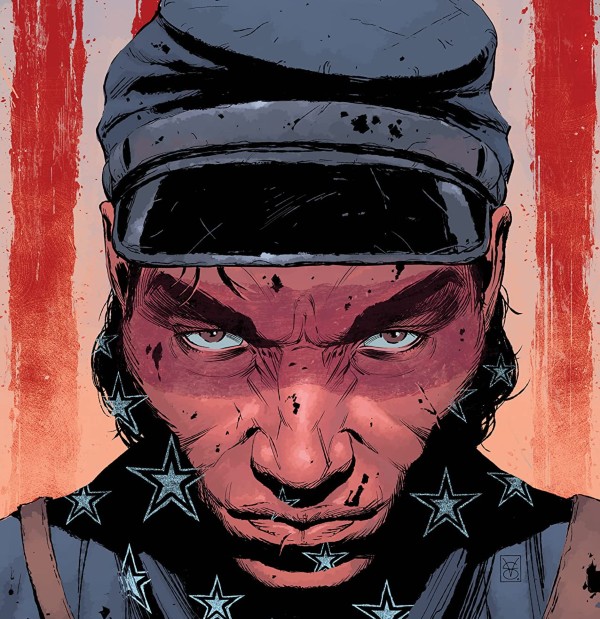 “Two Moons” #1 is a feast of a story, full of memorable characters, brutal action sequences, and impeccable plotting. Oh, and Giangiordano’s art is worth the price of “Two Moons” #1 alone. When we reported on “Two Moons” #1 at the end of last year, we had an inkling that this story would check all the boxes, and after reviewing the first issue we’re confident that this is a comic to keep an eye on — especially for fans of historical fiction, action, and deep dive character studies. Image may be marketing “Two Moons” #1 as a horror story, but it’s so much more than that. Note: Minor spoilers ahead. 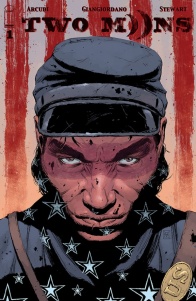 RUMBLE and B.P.R.D. writer JOHN ARCUDI is back at Image with rising star VALERIO GIANGIORDANO for an all-new ONGOING HORROR SERIES! This issue starts the long journey of a young Pawnee man named Virgil Morris—aka Two Moons—fighting for the Union during the Civil War. When he is suddenly confronted with his shamanic roots, he discovers horrors far worse than combat as the ghosts of his past reveal the monstrous evil around him!

Before diving into the story and art, it’s important not to dance around the elephant in the room. “Two Moons” #1 is a story about a Pawnee man written by a white dude. Anyone who remembers “Scalped” or follows Jason Aaron is familiar with the thorny territory that comes with such a story, and the conversations about about writing the other and representation that comes with it. I’m no expert on Pawnee culture and the way it intersected with US politics during the Civil War, so I can’t offer a critical lens on the matter for this story specifically. However, we will say that John Arcudi is aware of the tension, and the end of “Two Moons” #1 includes a letter of his in which he discusses his thoughts about writing a culture beyond his own, and his focus on doing so with tact.

On all levels, it’s clear that Arcudi has put a lot of thought into “Two Moons” #1, and this is most apparent in the dialogue. Characters in “Two Moons” #1 speak with a well researched 1860s vernacular, and “Two Moons” #1 is full of raucous slang that makes it a joy to read. Stylistically, this helps adds depth to the world and builds character personality, and makes us feel immersed in the story. Giangiordano’s ability to capture facial expression and generally provide of visual cues as to how characters feel helps a lot. We may not know what being “half out their supper dishes” means on paper, but based on the Confederate soldier’s stance and body language, we know that it means he thinks his side’s got the upper hand. Visual language that matches the written language is important in comics, and “Two Moons” #1, Arcudi and Giangiordano move in lockstep. Finally, writing the story in the vernacular of the time just makes immersion that much stronger. In other words, when the union captain yells a battle cry about sending the filthy secessionists straight to hell…I feel that.

While “Two Moons” #1 sports a semi ensemble cast, a handful of characters rise to the surface as ones to watch. First, there’s Virgil Morris, our lead protagonist. Virgil, a Pawnee man raised by white foster parents, is a reluctant soldier in the war — he’s a sharpshooter fighting on the right side of history. But Virgil is living the history, not looking back at it. Struggling with assimilation and stuck in the throes of brutal warfare, he takes on a more nihilist view. There are certainly tropes at work here, but Virgil still feels like an original character we can empathize with. He’s a straight shooter, both with a rifle and in life. He’s smart, but not immune to missteps. He’s stoic, but not free from panic. Virgil feels real, and we can’t wait to read more about him. Then there’s the Irish nurse, whose importance in the story has only been hinted at so far. Regardless, her conversation with Virgil feels earnest, and we get a feel for her as someone who cares deeply about people, her optimism a good foil for Virgil’s nihilism.

But the real show stealer in “Two Moons” #1 is Sergeant McBride, a burly, Black Beard looking Union sergeant who takes no prisoners and a lust for war. He’s brutal, full of bravado, and so much fun to read and watch. Giangiordano also takes the lead with the character, rendering him so well that his personality and purpose are immediately clear the second he appears on the page. By the time his monster transformation occurs, his demon form is a natural extension of his human form, and it works wonderfully. While Giangiordano’s uses a realistic style, his art still allows for some embellishments to let scenes are characters breathe. This is especially true during the full page splash battle scenes in “Two Moons” #1, which are a Where’s Waldo of violence. In these scenes, Giangiordano draws dozens of localized, little skirmishes. As we read these images, we can easily imagine a storyline for each grueling tug of war over a rifle, and for each saber slash. In sum, Giangiordano captures the total, reckless carnage of the Civil War extremely effectively. As an aside, We’ll also agree with Arcudi in this interview — Giongiordano knows damn well how to draw a horse!

Because the last half or so of “Two Moons” #1 revolve around a battle sequence, we want to highlight just how readable these sequences are. Oftentimes in comics, action sequences get muddy quickly: it’s hard to tell who’s fighting who, who’s coming from where, or what exactly the reader should be looking at on the page. “Two Moons” #1 is different, and Giangiordano’s art has an effortless clarity to it. Who and where the bad guys are is always clear (not an easy feat, given that blue and gray coats look pretty similar!), and the source of action is always known. The well paced pictures, aided by some remarkably crisp colorwork, are truly exciting to flip through.
When I’m reading through a panel, I’m not just thinking about what’s happening on the page, I’m thinking about the confederate soldier three panels back who was aiming across the river, straight at our protagonists. “Two Moons” #1 is gripping.

There’s so much that’s working in this story. Virgil Morris is compelling, the historical fiction angle on the story feels well researched, and the entire thing just feels very self aware. Arcudi plays with tropes when he needs to, then about-faces in another direction when you think you’ve got the story all figured out. “Two Moons” #1 is compelling, and as of now, we’re hoping for as much of it as possible.

Final Verdict: 9.6. “Two Moons” is a gritty and nuanced addition to the historical fiction horror genre.