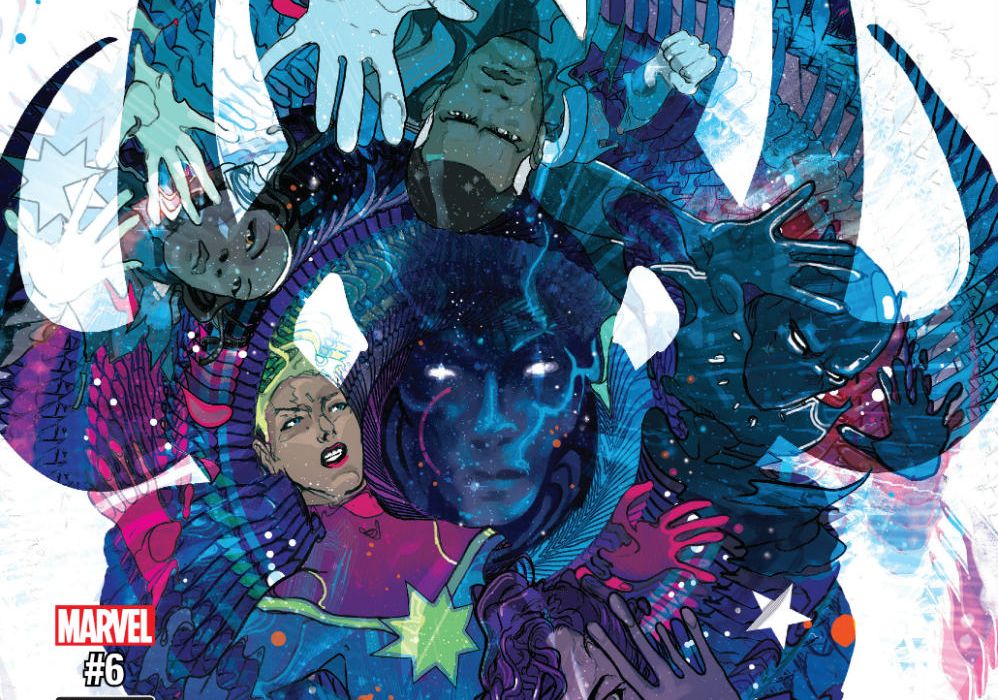 With the release of Guardians of the Galaxy Vol. 2, a spotlight is being shone once again on the intricate Marvel Cosmic characters. There’s a layered history with this corner of Marvel that is often overlooked, however it’s detail and charm mirror that of the mainstream Earth based content. Al Ewing’s “Ultimates” saga has been the best representation of the Marvel cosmic in years, and issue 6 of his second series looks to be a real game changer. 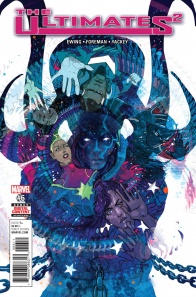 The Cosmic Jailer — revealed!
In this special issue, we tell the shocking secret history of the one being that could chain Eternity!
But why? The answers go back to the very beginning of the Marvel Cosmos — and beyond!

Ewing opens with an exposition explaining the core threat of the series – The First Firmament, the embodiment of the first existing universe. It ups the stakes higher than they have been in this series, and in most of Marvel canon, making for entertaining and awe inspiring reading material. However, it can get a little too bogged down in its self-explaining narrative – I do love knowing the ins and outs of Cosmic Marvel, however I feel like we’re shown too much information all at once, losing the mystery behind the threat. Similarly, the First Firmament’s (let’s call him FF from now on) motivation is a little lacklustre. He seems to be seeking revenge for being exiled, and his jealousy grew too much watching from afar. Although it’s interesting, it seems a little base for the literal depiction of the universe to be jealous.

When it comes to the team themselves, Ewing proves his deft hand at penning characters and mind blowing twists. At one stage, Spectrum and Blue Marvel pull a fusion dance to create ‘an exponentially more powerful form’ with omega symbols on its hands – maybe a reference to the Ex Nihilos in Hickman’s “Avengers” run? Regardless, it’s a great way to keep old characters fresh. Speaking of, Ewing masterfully breathes new life into the New Universe characters, the Troubleshooters. The introduction of the godlike Psi-Hawk is another fusion-like moment, adding a god-like being into the fray and layering characters like Jim and Terry as they join the Ultimates’ side. It’s a great superhero sci-fi moment, giving us an executioner’s row worth of cosmic powered characters.

It’s exhilarating how much has all happened considering we’re only 6 issues into this series. Ewing has a strong eye for pacing, especially as he brings Anti-Man’s character arc full circle. If you’ve been following most of Ewing’s work for the last few years, this issue will contain a lot of emotional payoff with the character. Anti-Man has become much more than the one-note revenge driven villain in his debut, and his scene re-empowering Galactus here is representative of all that character development. Although I feel like there could’ve been more of a development of the relationship between Galactus and Anti-Man, but I think that’s more of a thought on the whole series.

I cannot overstate how perfect Travel Foreman’s art is for this series. His surrealist, over the top renderings of characters like Eternity and Galactus post-lifebringer pay excellent tribute to weird Jim Starlin era Marvel Cosmic. The opening sequence describing how the FF came to be and developed a hatred for Eternity could’ve easily been a lot worse in any other artist’s hands, however Foreman has such an eye for cinematic storytelling with larger than life figures. I love the use of the eight-panel sequence to show the FF being sent into exile and Eternity being born. It’s essentially two images split four ways, but it makes it so much easier to follow the story without feeling bogged down by slabs of exposition.

More on his character work, I love how expressive his titan-esque figure are. Never have a seen a more terrifying Galactus than the petrified flesh, zombie-like Galactus that Foreman goes to town on. He’s able to realistically depict how he interacts with the world around him too – every movement inspires showers of debris and veritable earthquakes. It’s almost tragic watching him moan ‘HHHNNN… GGHHRRR…’ as he shambles tremendously through the panels, a credit to Foreman’s ability to evoke all the feelings in me. I’d also be remiss in not pointing out how he handles the Blue Marvel/Spectrum fusion. If you thought Spectrum’s golden form was pretty neat before, prepare to bask in a pseudo-messianic figure that carries itself like the weight of the world is on its shoulders. In the usual grand spectacle fashion, Foreman has it unleash a monster Kamehame-ha wave on Rodstvow, seamlessly creating more visual delight for the reader.

One minor nitpick I have with Foreman’s art is that the settings always seem to be considerably less interesting than the foreground characters. It was fine for most of the opening sequence, considering that it was mostly set in the void of space, but a lot of the Ultimates’ fight seems to take place in a dull, blue room. Considering we’ve had multiple issues spent in this room, I feel like more effort than just the occasional sci-fi lines and cables would have made things more interesting and believable. However, most of the panel is taken up by the action so it doesn’t hurt the flow too much.

Matt Yackey is a juggernaut when it comes to coloring, one of the reasons this book has such a distinctively grand tone. To compare, the last Foreman art I was exposed to was in Animal Man, who (to my knowledge) colored the series himself with a tone that was grimmer and dull that fitted the book. Yackey depicts everything with a majestic or sinister glow, one which just somehow avoids looking like early 2000s photoshop work. One of the best uses of colors here is on the Psi-Hawk, I feel. Psi-Hawk glows like any other god-level character with a blue intensity, but it’s just such a distinction from the typical gold hues that it’s quite regal. I think Yackey’s color work in the final Anti-Man scene is also important into executing that to best possible effect. Yackey first has Anti-Man shrouded in darkness, but then switching to a luminous ray to show his moral and physical change – a subtle touch that only the Colorist can bring to a book.

“The Ultimates 2” remains one of Marvel’s best series on the stands right now. Ewing brings his all with potent Cosmic gravitas and drama that hasn’t been seen from this publisher in years, with the introduction of the FF and characters like Anti-Man. Foreman gets to go all out with the most high-concept stuff Ewing has given him on this series, and Yackey sets the tone like no other. Although it’s slightly hampered by some motivation and setting issues, it’s safe to say this is a very rewarding book for long time and newer readers.

Final Verdict: 8.2 – The best Marvel Cosmic comic in years comes to a huge climax as Ewing, Foreman and Yackey bring out the big guns.