The past couple of days everyone has been going crazy over the fact that Bryan Fuller, of Hannibal fame, has been confirmed to helm the new Star Trek TV series. While Abrams may have brought a version of the classic show to the big screen only recently, it seems fans are still pining for a version that sticks closer to the traditional setup of a diverse and intelligent crew manning a small vessel and doing some actual deep space sciencing, as opposed to simply tooling up and trekking – guns blazing – into darkness.

Well, I’ve got news for all you pining trekkies out there.  That continuation already exists, it’s just being written by Ewing and Rochefort, and wrapped in an all new, all different, Marvel package. 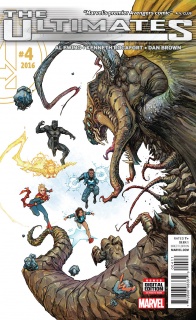 The Ultimates are headed to the very edge of everything that is – and beyond! Destination: Outside! But on the way, they’re going to have to deal with pan-dimensional parasites, rogue realities, universal systems…

…and an enemy from Blue Marvel’s past.

Seriously. Since the very first issue, this book’s team (although ‘crew’ feels more appropriate, given how long the group has spent in deep space) of ‘Ultimates’ have been boldly going deeper into uncharted Marvel space, attempting to science their way out of any problem their fists and phaser blasts can’t fix. This book is probably the most cosmic-focussed of Marvel’s new offering, and the final frontier is a fittingly awe-inspiring angle for a team of individuals who are each more than qualified to be the ‘powerhouse’ on any self-respecting super- team.

This issue sees Blue Marvel, Black Panther, Spectrum, America Chavez, and Captain Marvel diving headlong into the farthest reaches of known space, an area called the Neutral Zone, piloting a Pym Particle-reinforced quinjet. That sentence, as well as being packed with so much Marvel-specific jargon it might as well be written in Kree, pretty much sums up the density of Ewing’s  storytelling so far this arc. In the space of a few short issues he’s jumped from concept to concept in a way that feels indicative of the pace that Adam Brashear and T’Challa,  two of the smartest minds in the marvel universe, might actually think.

I like how Ewing writes, I really do. His science-heavy scripting is exactly the kind of Pseudo-scientific onslaught I expect from a writer with a background in sci-fi and fantasy novels, and this run on “Ultimates” comes complete with dialogue so dense it’d make Aaron Sorkin’s head spin. That being said, the first few issues of ‘Ultimates’ jarred with me a little. With so much science being fired, scattershot, at the reader that it was difficult to know what was supposed to be possible and what wasn’t. One of the major straplines for this series has been “the impossible is where they start” so clearly this kind of blurred possibility is what Ewing was trying to construct, but without any technological consistency he runs the risk of veering into Whedonesque ‘Phlebotinum’ territory.

That being said, this issue displays the side of Ewing’s style that always works for me: his character development. As the tag for this issue teases, we run into an enemy from Blue Marvel’s past, and this gives Ewing a chance to put an emotional weight behind the crisis at hand. That extra, emotional challenge is so sorely needed when we’re dealing with characters so powerful that a purely physical threat is almost impossible to construct (unless Ewing has another Galactus-level villain up his sleeve). Ewing weaves Blue Marvel’s past nicely into the team’s present, offering an enemy who carries both the potential to do some practical damage and to shake the foundations of BM’s philosophical conviction. And really, in a book about the far edge of what’s possible in science, those kind of challenges are much more fun. With characters who are capable of almost anything, it’s so important to see them stop one another and ask if they should be crossing certain thresholds from time to time.

As usual, Rocheforte clocks a truly stellar (in every sense of the word) performance in this issue. He’s been perfectly chosen for this book, and his technicolour rendition of deep space feels reminiscent of Christian Ward’s similarly psychedelic work on “ODY-C”.Rocheforte opens up some brilliant anti-matter energy in this issue, and it positively crackles off the page. This is definitely due in no small part to Dan Brown’s contributions as colourist, and the superhuman hues that break out as we travel deeper into space are every bit as otherworldly as you could hope for. As the Ultimates break through to the Neutral Zone Rocheforte offers up a plethora of variant costumes to help our heroes deal with the unique demands of Neutral space, and his meticulous and tangible designs really add to the science-focussed vibe of this book.

There are certain points at which Rocheforte’s panelling feels a little too distracting for my liking, especially during more dialogue-heavy scenes. His use of multicoloured shapes that spark off each insert panel is gorgeous, but I like this book best when it calms down and gives itself room to breathe. Rocheforte’s execution of the titanic forms of this team’s heroes is superb, his dynamic bodywork only really being teased in the few physical scenes we’ve seen so far, but already I can’t wait for the Ultimates to finally run into a group of all-powerful villains for an almighty showdown. What’s more, in the far reaches of Rocheforte’s prismatic space, we might get to see the full force of their godlike powers.

This book feels like a great example of one of the big two loosening the reins a little with regards to form and execution. Ewing and Rocheforte’s combined vision reads much less like a superhero comic and more like a strange super-science manifesto. While it may contain recognisable characters from the Marvel U they’re being combined and utilised in fresh new ways and we’re getting to see a kind of book that you wouldn’t usually expect to be used as a vehicle for at least two characters with confirmed dates in the cinematic universe. I genuinely don’t know where this book is headed, but if it keeps going this boldly, I’ll be happy to follow.

Final Verdict: 7.6 – Classic Sci-fi stylings with an ultra-modern edge. It’s still not too late to dive into the weird and wonderful world of Marvel Cosmic.