As the inhabitants of The Hotel Oblivion wreak havoc on The City, The Umbrella Academy finally joins forces once again to combat the villains their father locked up so long ago. Minor Spoilers Ahead. 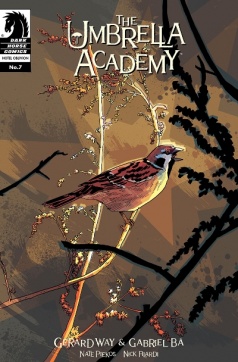 With Doctor Terminal and Perseux IX causing utter destruction across The City, the Academy is battling every super-powered villain that was imprisoned in the Hotel Oblivion. All while Vanya and Carla come across a new mystery from Prof. Hargreeves’s past. Everything has lead to this world-altering event and nothing will never be the same again.

The core story is simple enough, but there is a lot of extra material to hash out. Issue 7 is attempting to wrap up a whole lot of old plot, new plot, and various threads that have been strung up like an obsessed detective’s wall of evidence. Vanya is still in Norway with Carla at the secret compound. Her mother greets them in a new robotic body and group of people keeping to the shadows that she wants to introduce to Vanya. We know Carla is a part of this new group, but there is no real information on who, or what, they are. While this meeting is happening the crew of the Minerva led by Doctor Zoo and the crew of heroes helping the Academy are getting are being decimated. All of their power and on board weapons are no match for the combined strength of the conjoined Terminal and Perseus. The epic battle across the city rages on. Spaceboy, The Kraken, The Rumor, Number 5, and The Seance are fighting the hordes of super villains destroying everything and killing hundreds of people.

With the last two issues pulling in a sizable amount of story, this final is focused far more on giving smaller, more direct answers to a few things while keeping some of the grander elements in play for future arcs. It also focuses more on action, which is totally fine for this finale. It is definitely needed as a breather from the heavy exposition. Huge superhero battles, cosmic explosions, destroyed skyscrapers; everything one could want from a comic like this. While Way’s script is in no way light or losing any of its power, he takes a step back from the dialogue to allow the action and emotion to fill up the pages.

The artwork in this issue is some of the finest in the entire “Umbrella Academy” series. Gabriel Ba’s illustrations are incredibly stunning. His work tends to have a more dreamy, lighter than air look to it, which is a signature that makes the style so uniquely his. Whether working on something more mundane or the fantastic, he always beautifully balances the reality with surrealism. His work on this issue has a substantial weight to it. It might be the least grounded in reality that the series has been, but everything feels solid. You can reach out and touch people and things. In most of the previous issues, everything tended to look like it was made of liquid or gas, it would slip out of existence if you weren’t careful. The action and grand explosions are cinematic and Ba’s work is motion by design. This art nearly punches you in the face.

Nick Filardi’s colors are impeccable. Every line, every minor detail, everything has been meticulously colored. Nothing is looked over. He gives life to everything Ba has drawn. His use of light and shadow adds to the weight of the drawings I already discussed. He makes you feel the light and wind from the huge weaponry blasts and detonations. Destruction and gore is palpable. The colors pull up details and emotions like a paper towel lifting a wine stain from the carpet. With the turn of each page it is almost possible to see the images moving; filling in the blanks to allow your mind to give the entire issue a movie-like quality. Fans of the Netflix series will notice some similarities in settings (such as a fight in a theater) and apocalyptic plot, but aside from a few details, this story is still quite different from what we got on screen.

Nate Piekos continues to be one of the best lettering artists in the industry and his use of text conveys full emotion, even through slight variations of bold words. His skill is that he puts a spin on the modern comic book lettering, having it feel timeless, yet new and slick all at once. He is a master typographer and he is the perfect choice for this book.

‘Hotel Oblivion’ #7 is not only a proper conclusion to this arc, but an excellent culmination of every issue of “The Umbrella Academy.” This is the satisfying team-up that has been hinted at for so long, but was always just out of reach, without betraying Way’s sensibility for keeping his writing just left of center. It isn’t perfect, but it gives readers enough answers, while still leaving many doors open for what is to come in the future. Along with the first chapter of this arc, this makes for a great bookend issue that confidently closes out a story that lost its way a time or two. This is the type of story arc that works best as a binge read. With how much information gets presented in each issue, it can be tough to retain all of it over months of releases. Re-reading the first six issues is highly recommended before cracking #7. Going through the arc one more time was highly satisfying and allowed me to re-evaluate the whole thing and pick up on details I missed the first time around.

Final Verdict: 7.5, The explosive superhero story that fans have been hoping for for years. Way’s open-ended script paired with Bá and Filardi’s combined talents help push everything in the right direction.