The Inhumans are sprouting up like daisies around the world, the heir to the Attilan Throne is in the hands of a madman and tensions mount between Inhumans and X-Men. So, how does it fare? 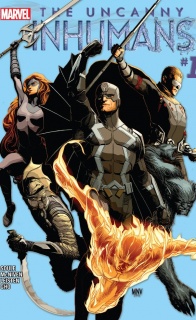 Meet the Uncanny Inhumans. Medusa! Black Bolt! Triton! Reader! Human Torch? Beast? It’s eight months later and everything is different for the Inhumans. Medusa and Johnny Storm are an item. Black Bolt is running covert missions of his own. And something so big happened between the Inhumans and the X-Men that Beast is now on the side of the Inhumans. And if that’s not enough, the most dangerous villain throughout Marvel’s history is against them- Kang the Conqueror. Don’t miss what the epic team behind Death of Wolverine (Charles Soule and Steve McNiven) have in store for you. All this plus a bonus story by Charles and Brandon Peterson (Uncanny X-Men).

“Uncanny Inhumans #0”, way back in April, depicted the mission of the once Inhuman King Blackagar Boltagon (Can we just take a moment to appreciate the fact that Jack Kirby created a character named “Blackagar Boltagon” for a moment…. thank you) who knew of the coming Doom of the Marvel Universe where Jonathan Hickman would destroy your childhood. But Black Bolt would have none of that and, to ensure his son Ahura would survive, gave the boy to time-traveling asshole Kang the Conqueror (kinda like The Master, but with a terrible taste in pop music, but a fantastic taste in chairs. Basically If Kang protects Ahura, Kang keeps him.

But now the Secret Wars have passed (shut up! Keeping a promised schedule is like really really hard, guys!) and the fallout begins. Now, while I believe that $4.99 issue ones should be strung up by the neck and kept so until their feet stop twitching, you do get a good amount of content in this issue. I’ll give this to Charles Soule: The dude has done his research on the Inhumans. I’ll get a bit further into this when I talk about the backup story, but it’s clear that Soule has done his work when it comes to this franchise and every time I’ve seen the guy talk about it, he clearly cares and wants to make the Inhumans unique. Between this issue and Uncanny Inhumans #0, this feels more like what the Inhuman’s books should be.

Now, this issue being essentially a pilot for the Inhuman’s story going forward does have a lot of ground to cover. The aforementioned going ons with the Royal Family and Kang are just part of this issue. We also see Medusa and a bunch of the cast from “Inhuman” dealing with a group of invading Chitari soldiers. And you know, it does my heart good to see that Carol Danvers and her Alpha Flight are just as useless from protecting us from space invaders as S.W.O.R.D. was. Seriously, why do we pay taxes to that group? Anyways, the reasons for why the Chitari came was for one of the “skyspears” that have shown up all around the world that seem to enhance Inhuman powers when near them. After giving the aliens the what for and Medusa being a better PR person than like 90% of the superhero community, they return to New Attilan where we meet the first of the two newcomers to New Attilan: Dr. Hank McCoy a.k.a. Beast.

Now, I know a lot of people are concerned with the going ons between Mutant and Inhuman going forward (there was a reason I put it in my This Month in Comics ). And honestly, there still is a lot of questions on that front but I expected this: Beast is working with the Inhumans and their advanced tech to try and figure out why the Terrigen Mists are harming mutants and how to counteract it. There are some hints as to what has happened during the eight month time skip (alluding to the missing Cyclops) but not enough to make a full definition. And Hank makes it clear that he’s here because he doesn’t want to see a war between Mutant and Inhuman, to which Medusa agrees. I do also love that Iso is taking an interest in sciences and hope to see more banter between her and McCoy.

The final of the many plot threads in the main story deals with Black Bolt and Medusa’s breakup and the fact that she is dating Johnny Storm, who is officially the liaison between New Attilan and NYC. And their smooching just as Black Bolt comes in is how we close off. Now, Black Bolt and Medusa are one of my favorite couples in comics, and I still think it was a great idea for Medusa to essentially kick Black Bolt off his throne and out of the house. Considering everything that has happened and Black Bolt has done since the Fall of Attilan, not unjustified. As for her dating Johnny Storm? Honestly, it’s going to be really dependent on how Soule writes him. It’s still only been introduced.

I want to talk about Steven McNiven’s design work for some of the costumes. I really dig them: in particular Johnny’s new yellow and black design. Very sleek and a bit vain, but that goes with Johnny and the color scheme really does go well with him. Triton and Iso have had some redesigns as well that I enjoyed but the one I’m a bit on the fence with is Black Bolts. I kinda get why in-story he’d change to a bit more armored look considering who his enemy is, but it does remind me a bit too much of a black and blue version of movie Captain America’s armor and that feels off. But it’s not just costume design that McNiven has excelled at here. He is one of the most detail oriented artists that I’ve seen, whether it is the Attilan of 13,000 years ago, to scales on dinosaurs that Kang sics on Black Bolt’s group (because he’s a jerk like that) to Beast’s (and Fourey!) fur and genuine facial shape. I will say though: while I appreciate some of the flares that McNiven gives Medusa’s outfit, I feel like she’s one who needs a bigger redesign. That purple outfit never really screamed “Regal High Queen” to me but what do I know about fashion?

It is so strange to see Sonny Gho (who I’ve only seen with Lenil Francis Yu) color Steve McNiven and inker Jay Leisten. After seeing Justin Ponsor color him for so long, felt a little dissonance reading the book at first. And the coloring is not bad at all, Sonny Gho is a great colorist. He has a lot of shots here that glow so beautifully, whether it’s Black Bolts sonic shout, a nuclear bomb, Human Torch’s flames reflecting off a face, or Reader thinking with portals.

The backup story (with Brandon Peterson and Nolan Woodard taking on art) was essentially another short story for “All-New Inhumans” that is launching in December. It’s here I realized how deep Charles Soule’s research and care for Inhumans mythos is because I completely forgot that Gorgon had kids. Like, I’m the one who was complaining last year that it seemed the book had forgotten all about Ahura and Luna (who needs to show up as well) and here’s Soule going “Hah! I can go more obscure than that!” Kudos. But yes, this short story involved some of the NuHumans (a name that I’m really not sold on, honestly. I get why the differentiation exists, but just feels really unnecessary) on a mission to help locate all the scattered citizens of Attilan from before the Fall. It’s a solid story and setup, with Peterson and Woodard providing a smoother art style than the main story and depicts Flints more precise powers with great kinetic movement.

Now I did like this issue but it does have a major problem for me, someone who has been following Soule’s Inhuman’s story since the beginning. As mentioned, this issue has a lot going on. And it’s not the beginning of Soule’s work with these characters. As such, there is a lot of recap that it required. It needed to recap the events of “Uncanny Inhumans #0”. It needed to recap some of the events of “Inhuman”. It had to recap the relationship between Mutants and Inhumans. It needed to recap the current standing between Black Bolt, Medusa and Human Torch. As such, there is a great chunk of dialogue in this issue is very exposition-full. Sometimes it works but it can be clunky at times. Lot of “This is just like that time” and “My powers are” and Kang even goes “Allow me to explain”.

And because so much of the dialogue felt exposition-heavy, the book could feel cluttered. And for a $4.99 book, I had to think long and hard on the final verdict, considering a major part of the information I knew from past reading. I would have rather have had:

Regardless of the somewhat “pilot-ey” nature of this first issue, I am still very intrigued by the events to come with the Inhumans.

Final Verdict: 7.0- If this is your first foray into the Inhumans, Soule and McNiven make a great effort to introduce you to a wide variety of plots.