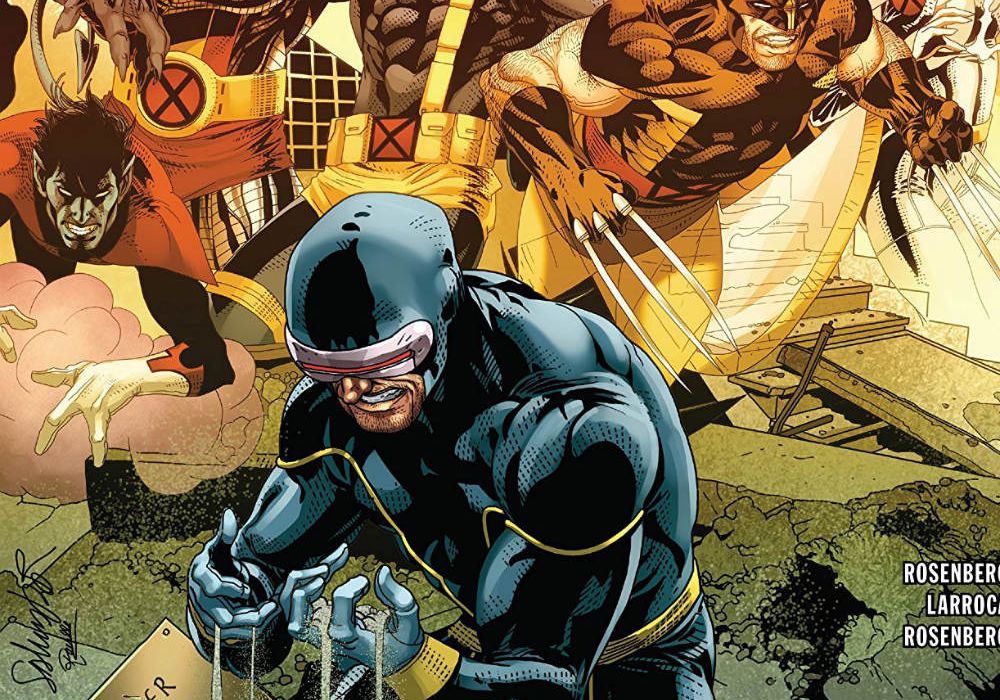 The past is, once again, prologue. With a main story that wastes no time on reintroducing two seminal mutants to the X-Men and explaining what this series’s mission statement will be, Rosenberg, Larroca and team deliver an excellent first issue. 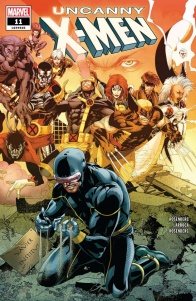 SPECIAL OVER-SIZED ISSUE! After the devastating events of ‘X-Men Disassembled,’ it falls to Cyclops to rebuild the X-Men in the face of overwhelming hatred. Thankfully, he’s not the only X-Man to have just returned from oblivion. Scott and Logan are together again, and they are mutantkind’s only hope. Writer Matthew Rosenberg and returning superstar X-Artist Salvador Larroca lead the X-Men into their darkest hour…and beyond!

After a well-executed weekly series establishing the disappearance of the world’s most famous and prominent mutants, “Uncanny X-Men” re-shifts its gears with issue #11 on what can arguably be called the true debut of the series. Judging it on that basis, there is a lot to appreciate in here, chief among them being how Rosenberg obviously understand what makes these characters tick, and how Larroca is well-versed on crafting dynamic pages, both on introspective and action-heavy moments.

Starting with the art, Larroca is at home with Marvel’s mutants, having worked on them previously on “X-Men,” “Uncanny X-Men,” and “X-Treme X-Men.” However, this does not mean that the artist simply retreads old ground. No: Larroca is quite inventive on how he utilises different page and panel layouts to design something the feels cinematic and intimate at the same time.

Take for instance the final pages of the main story, where diagonally-shaped panels show, in quick succession, how Cyclops and Wolverine lay waste to a number of their foes. It feels absolutely kinetic… until it stops completely as both heroes take a breather and acknowledge their positions.

Looking back at the beginning of “Uncanny X-Men” #11, with the formal reintroduction of Cyclops to the fold, Larroca keeps the narrative flowing with a more traditional panel display, zooming close in facial expressions and smaller situations to maintain different beats, locations and interactions. It paints a diverse picture of where Cyclops is going… as well as what he may face in the future.

Colours by Rachelle Rosenberg contribute a lot to the mood of the story, setting it firmly around shadows, back-alleys and other poorly lit environments. Lightning effects and power signatures are, sometimes, the only source of light on these pages, and the artist does a terrific job at showing how these places would be seen under those conditions.

It is, however, on Matthew’s Rosenberg script that “Uncanny X-Men” #11 shines the most. At its heart, the story is a love letter to Cyclops, but not just any Cyclops. This is the quintessential X-Men being portrayed as such: a strong leader that, even when taking a beating, thinks about his people, their place in the world and how the world could react to their actions. This is a man that can visit the worst places of the world if that it what he must do, and, minutes later, face the main leaders of the Marvel universe without blinking.

If that wasn’t enough, when the action really picks up in a surprising manner, this is when Rosenberg brings Wolverine to the fold. In all honesty, the pages that follow are such an incredible display of mutant action, of their desperation and strength, that old time fans will be left gasping. Once again, the writer’s grasp on these characters lead the way, with a special highlight to Cyclops’s and Wolverine’s reaction to one another. These are not friends, not really. It is even hard to argue if they appreciate each other’s company. But these are, regardless, two men who respect one another, who known that by working together they can achieve greatness for themselves, and for their people and friends. That balance is so perfectly written on this issue, with such a simple exchange amid a beautiful canvas by Larroca, that it becomes a cornerstone of the series going forward. It is that good.

Being a giant-sized issue, “Uncanny X-Men” #11 still relies on two other shorter stories by Rosenberg, one focused on Wolverine (drawn by McCrea), the other on Blindfold (drawn by Ramírez). The one on Wolverine is not bad, but it offers little in terms of content, other than a revisit of the main plot trough Logan’s eyes. The second one, however, is an inspired tale of depression, fear and angst, using a less-known character to distill some of the core themes and essence of the mutant mythos.

As a conclusion, “Uncanny X-Men” #11 offers a lot of passion for Marvel’s mutants, from a creative team bent on making this mutant flagship title all that it can be. By starting on two of the undisputed leaders and figure-heads of the team, and building from that, Rosenberg, Larroca and team are precise on their execution, and flashy on their display.

Final Verdict: 8.9 – An excellent restart to the series, “Uncanny X-Men” wastes no time setting the new status quo and mission statement, treating their characters with care and respect.