Bendis’ mammoth run with on Marvel’s most popular superpowered soap-opera comes to an end. It’s a subtle shift in the state of Homo Superior, but with delays and the onset of an All-New, All-Different world, is it too little too late? 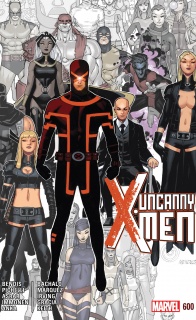 The final explosive issue in Brian Michael Bendis’ epic X-Men saga! Scott Summers: savior or destroyer? Questions will be answered! The Jean Grey School, the New Xavier School, it’s all going to change. The X-Men are at a crossroads. And not everyone will make it through in one piece. Featuring 40 pages of a host of popular X-Men creators!

When was the last time you saw a room full of mutants without a fight breaking out? I mean, seriously, since 2011’s “Schism” run there have been at least two different teams of ‘X-Men’. Bendis has been the architect of the mutant universe for about three years now, and the majority of that time he’s had to run two flagship books because half of Charles Xavier’s proteges can’t stand the sight of each other. So when the opening few pages of this final issue presented a reason that manages to unite almost every mutant in recent memory under the roof of the Jean Grey School for Gifted Youngsters it certainly made for a thrilling image for any longtime fan.

The premise of this issue is simple: Beast has been quietly planning, experimenting, and scheming for what he considers the good of the X-Men. But, like many of Marvel’s most intelligent people, he often fails to include the lesser minds that surround him, believing that the time it might take to explain and justify his decisions could be better spent simply implementing them and improving people’s lives. This lone scientist routine has gotten too much for his friends, teammates, students, and even his younger self, and they have finally staged an intervention to remind him that he can’t, and shouldn’t be solely responsible for the fate of their race.

While I’m not sure I agree with the official blurb’s claim of an ‘explosive’ ending, this issue reminds me exactly why I enjoyed Bendis’ run with the X-Men so much. His strength with the X-Men always lay more in nuance than in blunt force battles. The fact that for almost the entirety of his run he’s been pitting teammate against teammate means that he’s been able to experiment with shades of morality rather than the standard comic tropes of ‘right vs. wrong’.

The main focus of this issue is an emotional and impassioned plea from both Uncanny and All-New teams for Hank to stop making decisions by himself that will affect them all. While this seems like a pretty open and shut case Bendis manages to inject it with the intrigue and ambiguity that has peppered his run since the beginning. He manages to draw real, subtle emotion that feels like it stems from years of friendship. Beast, for his part, seems like he feels truly betrayed, and it’s really believable that what was supposed to be a good-natured gesture of help will end up doing more lasting harm to the world of the X-Men.

It’s impressive that Marvel have managed to co-ordinate such an impressive roster of artists to create such a unified final piece. The different contributors serve as a welcome reminder of the various styles that have characterised this era of the X-Men. It’s honestly a who’s who of big name Marvel artists, and the bright, latex-suited executions of the myriad mutants on display really reminds you that this chapter of the X-Men’s history is as visually distinct from Quitely’s iconic yellow X-suits or Byrne’s post-apocalyptic “Days of Future Past” outfits. While the issue’s story is essentially a string of conversations, the inventive panelling and attention to detail with complex facial expressions make it every bit as exciting (and more consequential) than most super-powered brawls.

Interwoven within the main storyline are a number of smaller, more individual character vignettes. These focus on the fallout for some of the mutants whose personal lives have been changed but largely swept aside in amongst the craziness that is the daily lives of the X-Men. These include a young Iceman calling out his older self for refusing to come out as gay, as well as a blossoming romance that pulls the All-New quintet further from their original counterparts timeline.

The collaborative element of the art in this book feels fun, fresh, and really helps keep the 40 pages from getting repetitive. It’s amazing to see each how each artist utilises their minimal space to do something engaging and visually interesting with even the more relaxed moments of X-Men downtime. A personal favourite of mine is the reunion between Colossus and Magik, which features some gloriously melodramatic artwork from Kris Anka. His panelling is so clean and precise that he manages to pump an almost manga-level of tension into a scene that could have easily felt like a throwaway set of talking heads.

While #600 is largely Beast-centric, it wouldn’t be a Bendis issue of X-Men if Scott Summers didn’t upstage everyone with his melodramatic polemics, and sure enough, he swoops in at the end with an announcement that might just be his most important yet. The final two artists in the book, Bachalo and Irving, manage to seal it up in a way that feels both fitting and ominous. Bachalo has been the mainstay on “Uncanny” for most of Bendis’ run, and his iconic crowd-scenes offer the perfect reactions for Scott’s shocking message to the mutants of the world, while Irving’s unsettling final images of an almost goblin-like Hank McCoy force you to wonder if Beast can come back from the criticisms that have been levelled at him, or even if he wants to.

Given the delay that this book had in getting out (it was originally billed with a May release) it may lack some of the punch that the subtle message would have delivered otherwise. But I feel like it’s a fitting send-off for a series that was always about character dynamics over muscular punching. The fact that Bendis had known and loved characters pitted against each other at every turn meant that he couldn’t just go around killing off his roster like a standard comic. That meant his books have felt more like Cold War than all out war, with hyper-powered protagonists crackling with energy but never truly unleashing it. Instead he experimented with the power of media warfare, modernising a battle that has been raging since the first issues of “X-Men” way back in the sixties.

The X-Men have always been hated and feared, but Bendis strove to make them understood, even as they struggled internally with their own ideologies. It’s been conflicted and fractured, but it was rarely ever dull. Perhaps now, with the world at large still afraid of them (and their own publishers trying to push them to the sidelines) these remaining mutants will finally put aside their differences and fight for a common cause… Or not, either way I’m excited to see what comes next.

Final Verdict: 8.1 – A Solid, subtle send-off for a book that defined another era of mutancy.