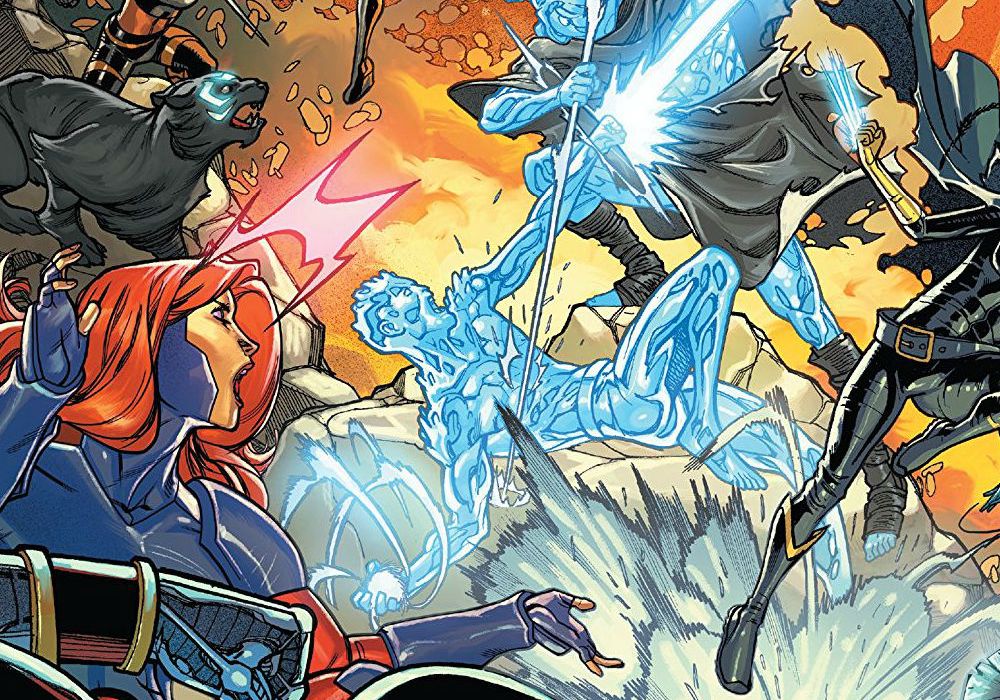 Who’s your favorite X-Man? I have to go with Cyclops (#CyclopsWasRight) but as a kid, I was all about Iceman. In all fairness to the other gifted youngsters, it had little to do with Bobby and everything to do with his fascinating mutation. Iceman had the, pun very much intended, coolest powers. I used to watch Spider-Man and His Amazing Friends reruns on Toon Disney and constantly reread his Marvel Encyclopedia entry. I paid especially close attention to how different artists would depict his abilities. As messy as X-Men: The Last Stand is, I adore the scene where Bobby ‘ices up’ for the first time. He may not be my number one anymore, but I’ve still got love for Bobby. 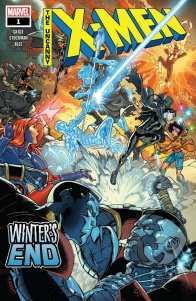 Written by Sina Grace
Illustrated by Nathan Stockman
Lettered by VC’s Joe Sabino
Colored by Federico Blee
Iceman and the X-Men get a special visitor from the future! An older Bobby Drake has come to the present to tell him to give up being a super hero. But what could have happened that would change Bobby Drake from the X-Men’s resident jokester to a morose mutant?

The Omega-Level mutant has certainly evolved in recent history. In 2015, Brian Michael Bendis revealed that Bobby is gay. This development sort of got off to a rocky start. For one thing, it was the time-displaced Iceman who came out as gay first. The older Bobby didn’t come out for several more months. Furthermore, it would be more accurate to say both were dragged out of the closet. Jean Grey outed the two and forced the older one to deal with it before he was ready.

Under Sina Grace’s pen, Bobby’s sexuality has been explored in depth and the character’s grown. Grace’s “Iceman” ran for eleven issues and then came back for another five. “Uncanny X-Men: Winter’s End” #1 acts as the series finale to Sina Grace’s entire run. That is very important to note. This review might as well be for “Iceman” #6. If you haven’t been following that series, you’ll probably be lost. I read Grace’s first run but hadn’t gotten around to the last five issues and I was a little lost myself.

“Winter’s End” takes place on Bobby’s birthday. After responding to a flood, he comes back to the Institute to see his ex-boyfriend Judah reached out and sent a gift through the mail. Michaela, a new student who premiered in “Iceman”, is struggling to fit in and Bobby offers some advice. When he heads out for his birthday party, he’s confronted with a future version of himself, Ice Master.

Ice Master hails from a future where he fell for Daken and the couple co-leads the X-Men. Daken kills the team, betraying them all to get his hands on the M’Kraan Crystal. Ice Master demands his younger self quit the X-Men to avoid this from happening. When talking doesn’t work, the future Bobby opts to fight.

The two are evenly matched until Jean Grey intervenes. Seeing the woman who outed him angers Ice Master and he attacks. Iceman splits them up and proceeds to chew them both out. He’s also angry about Jean overstepping her bounds and confronts her about it. He’s angry that his younger self had to go back into the past and back into the closet. Bobby’s angry with his future counterpart for drowning in self-hate and telling him what to do with his life.

Bobby decides to live his life on his own terms and heads to his birthday party, celebrating with friends and family. Christian Frost gifts Drake a large sum of money for saving his life back in “Iceman” and Bobby turns around and gives that money to the Morlocks he helped in his solo series. Ice Master fades away and thanks Bobby for reminding him he could change. The issue ends with Iceman sending a message to Judah, his ex-boyfriend.

There’s a lot going on in “Uncanny X-Men: Winter’s End” #1 and it feels like too much at once. It seems like all the different pieces are fighting for space. Michaela wanting to quit is mentioned and over just as quickly. Christian Frost comes and goes and Drake’s parents, who played a large role in his solo series, offer some very quick advice. You can’t really blame Grace for wanting to spend a bit more time with the supporting characters of “Iceman” but there’s only about twenty-nine pages here.

This overcrowding feels especially true when Bobby confronts both Ice Master and Jean Grey at once. His younger self having to go back in the closet gets glossed over. Jean’s actions are glossed over. The dialogue is loaded with exposition and its a bit clunky. Bobby’s declaration to be done with his ‘self-hating, Irish Catholic, guilt-tripping, inner-turmoil melodrama’ feels less like a triumph since it has to be spelled out plainly for the reader.

On the other hand…ice fight. Iceman’s powers are visually captivating and the Battle Royale is a pleasure to witness. It’s kinetic and exciting. Bobby capturing his future self with giant ice hands was amazing. Both Drakes assembling ice armies was fun. Ice Master transferring his consciousness into a golem was chilling (Last ice pun, I promise). The reason is a bit lackluster though. Why would future Bobby trust Daken? Present Bobby doesn’t even trust him, that guy’s the absolute worst.

The execution could have been better but I certainly appreciate the intent. Comics aren’t big on change. It might not seem that way because of all the fanfare surrounding any new developments at first. Eventually though, things tend to snap back to the status quo. News articles celebrated a black Captain America when it was announced Sam Wilson would be taking the shield. It was announced on television. Guess who’s back to being the Falcon nowadays sans shield.

Bobby’s been allowed to change though and has experienced true growth. Bobby Drake’s a beloved teacher and friend, clearly having a positive impact on those around him. He’s building bridges and making new connections. Iceman allows himself to be vulnerable and is committed to improving himself. Bobby’s no longer his own worst enemy and made peace with himself, living life his way. Robert Louis Drake is happy. In this issue, Iceman describes his current state as “peak me” and you know what? He’s absolutely right.

Final Verdict: 6.0 – Seriously though, watch out for Daken.