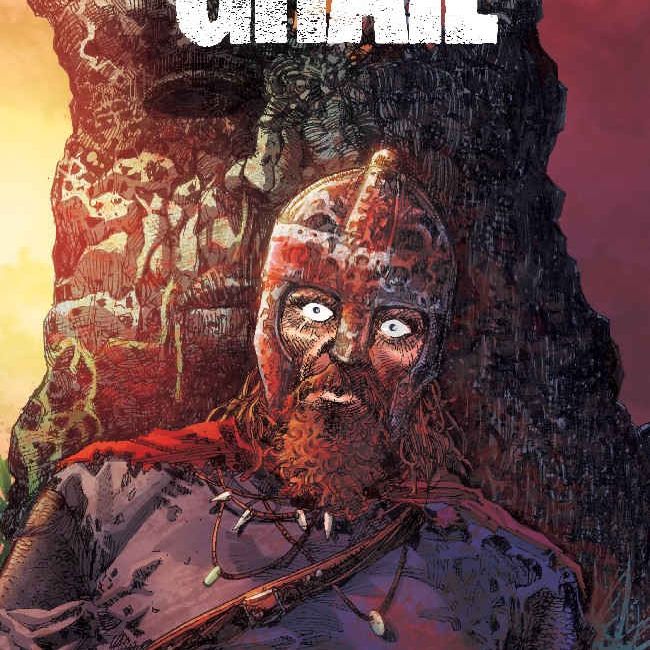 Cullen Bunn and Mirko Colak present the real, horrific story behind the legends of King Arthur, and it’s all a lot more…Lovecraftian than we’ve been told. Read on for our review of “Unholy Grail” #1, which contains minor spoilers. 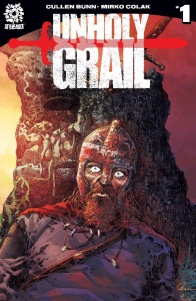 Arthur Pendragon was the king of all Britain. His story is legendary. Merlin. The Lady of the Lake. Excalibur. Camelot. The Knights of the Round Table. But these stories are bright lies painted over the truth. Here is presented the gospel of Arthur’s bloody rise to power and his unholy reign. The legend of King Arthur is not the stuff of legends, but the fuel of nightmares. As Arthur descends into darkness, is there any lingering hope that he still might do something good? From writer Cullen Bunn (Uncanny X-Men, Deadpool) and artist Mirko Colak (Punisher) comes a Lovecraftian take on the Arthurian legend that HAD to be told at AfterShock Comics.

“This is not how the world is meant to be.” So starts the first chapter of “Unholy Grail” #1 entitled ‘Perilous,’ after the fated seat at the Round Table – the Siege Perilous – left empty by Merlin, awaiting the Knight who successfully returned the Holy Grail. ‘Perilous’ no doubt also refers to the journey that lies ahead of Arthur in this darker retelling of his legend, one filled with demons and death. Writer Cullen Bunn has a certain affinity for tales that lean more toward the macabre (“The Empty Man”,) and he has a knack for capturing that fairytale spirit that classic folklore like the Arthurian world commands (his work on “Harrow County” is a perfect example,) both skills that are on full display here.

This debut issue does a lot to set up the story to come. “Unholy Grail” #1 is framed as a retelling of the legend, the quote above from Percivale of Wales, a character very much at the end of the story, looking back on what exactly went wrong. As we journey back to a time before the beginning, we become privy to certain ‘facts’ that simultaneously illuminate the reader to the truth, while shrouding the narrative in a fresh darkness. Familiar allies are not all they seem, and the more fantastical elements of the tale are given a demonic twist, all in the spirit of finally learning the ‘real story.’ This set-up is certainly intriguing, and as an opening chapter it grabs your attention in ways that even casual followers of the story of King Arthur will understand, but as an issue, it suffers by not really being enough all on its own.

The art of “Unholy Grail,” in a similar way to the script, feels like the best is potentially yet to come. The framing narrative allows artist Mirko Colak the scope to craft two detailed double page spreads of a Camelot destroyed after what appears to be a significant battle. The outside of the kingdom is surrounded by death, and inside the castle, in the great hall that houses the Round Table, there is desolation and destruction. There’s another time jump near the end of the book, where we see Merlin with an adult Arthur, both coming face to face with the true face of the Lady in the Lake. It’s a wonderful full page looking over Arthur’s shoulder at a truly Lovecraftian scene, and Colak has a way of depicting water and bubbles in a way that is insanely intricate and gives a real sense of movement as the surface of the water erupts in a violent display.

Elsewhere, throughout the quieter moments of “Unholy Grail,” Colak’s character work is subtle and realistic as he illustrates a talking heads scene at King Uther’s bedside, and it’s this subtlety that allows the more horrific moments shine. A scene early in the issue of a demon literally adjusting the skin of its new, human host body is particularly well done, as is a moment at the end of the issue where we see the fate of Percivale of Wales. Generally speaking, however, there’s not enough in this issue for Colak to do. When the battle (hinted at in this issue) is shown, when the true powers of the Lady in the Lake are explored, when some of the smaller story beats in this issue are paid off later, that will be where Colak’s art will shine. We can’t get there without that setup though, and that’s mostly what this issue is.

Maria Santaolalla’s colors are superb throughout, from the opening page deep under the murky, green waters of the lake (you can feel the rays of daylight struggling to break through to illuminate the treasures on the bed below) to the brightly colored clothes worn by the Barons and ladies of King Uther’s court, to the blood-soaked battlefield surrounding a derelict Camelot. Likewise, Simon Bowland’s letters do well to bring the narration to life. A weakened, world-weary Knight returning home, a Demon confronting and killing the first human he sees, and an omniscient narrator setting the mood and pace throughout “Unholy Grail” are all depicted with skill by Bowland in a way that enhances the story.

The narrative cycle of Arthur, Merlin, Camelot and the Holy Grail is one familiar to most, yet Bunn, Colak and the team have managed to introduce a darker, more sinister edge to the story that feels well suited and an almost natural part of the legend. This issue suffers from being merely the first chapter, and one with a lot of world building to establish, so much so that it never truly stands on its own. Instead, it bounces around time attempting (albeit successfully) to convey this new status quo for some old, familiar characters, sacrificing to a certain degree the semblance of structure and balance a single issue requires. Either way, “Unholy Grail” captures that sense that this is not how the world is meant to be and introduces a macabre unpredictability to the proceedings that can’t help but be engaging.

Final Verdict: 7.0 – An intriguing start to a take on the Arthurian legend that’s steeped in demonic mystery.