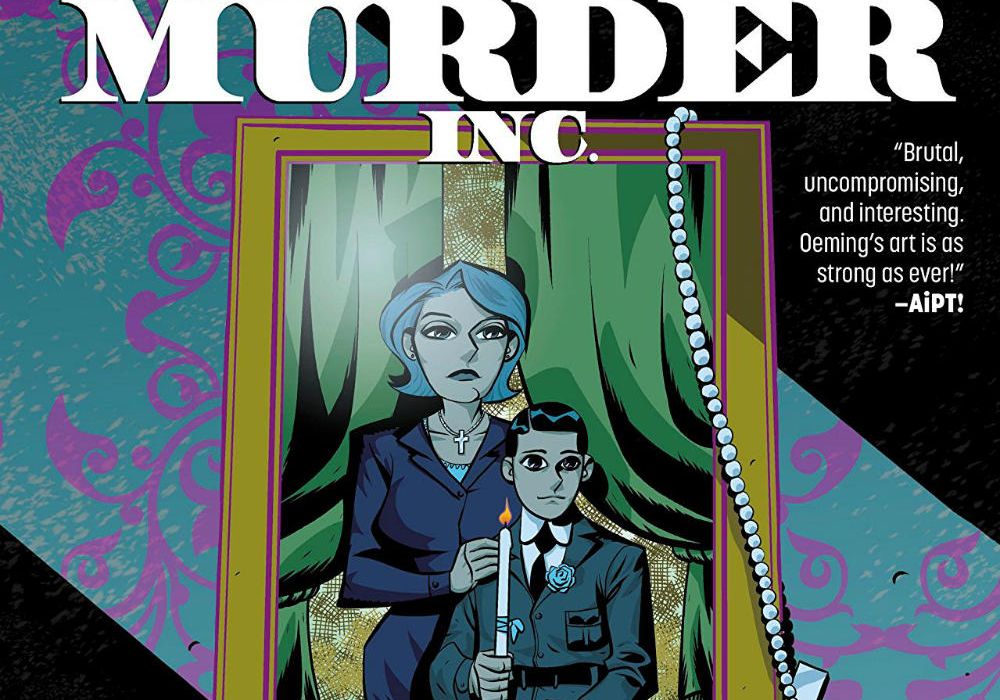 In this issue, things aren’t going well for the United States and Valentine begins to learn how things got to be this way. 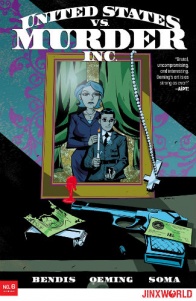 Written by Brian Michael Bendis
Illustrated by Michael Avon Oeming
Colored by Taki Soma
Lettered by Carlos Mangual
From the Eisner Award-winning creators of POWERS! Murder, Inc. has gone to war with the United States—and the United States has lost! The president is dead, the vice president has quit, there’s chaos in the streets, fighting in Congress, farms are burning…but thank God our boy Valentine has a plan. It’s an alternative look at our world that shows us what the world would be like if it were run by gangsters, where the five families of organized crime have taken over!

“United States vs Murder Inc.” writer Brian Michael Bendis is something of the poster boy for those who hurl the “decompressed” critique at modern comics. As “Murder Inc.” wraps up its second miniseries, it seems Bendis and artist Michael Avon Oeming laugh in the face of decompression. For a refresher here are things that have happened in the previous issues: The Bonavese compound was bombed, the mafia assassinate the President of the United States as retaliation, and the U.S. descends into chaos. This series has been a roller coaster ride. These plot developments don’t really matter, on an emotional level, it’s all to abstract for any sort of emotional connection to really form. Bendis and Oeming save the emotional gut punch for last as Valentine questions his mother on the moment of inspiration for trying to turn her son into a double agent against the family. Ironically, it could be argued this issue is the most decompressed, the majority of it is a conversation between two people in a dark room, but as with anything it’s about how it is done as much as it is what the piece is about.

The midsection of “Murder Inc.” involves Valentine catching his mother up on the events of the last few days as the United States descended into chaos. This montage through America is presented in a series of double page spreads, three of the issues six spreads. In fittingly cartoon fashion, the spreads rendered the calamity down to singular large images. Cities riot on one pages as the stock market and farmland burn in another, the gutter space is filled with a blood like spatter. Every image in this montage isn’t wholly effective, there’s a stillness to the image of farmland burning or the victorious Austin Milita. That stillness runs counter to Michael Avon Oeming’s overall spectacular use of perspective to create depth and guide the reader through a single large image. The pure full page spread of the House of Representatives descending into chaos as the Speaker refuses to ascend to the presidency is equal parts vibrant and violent. The addition of Carlos Mangual’s lettering on that page helps it stand out from the rest as his word balloons cut a diagonal slash right through the center of the page. That clear reading ling enhances, Oeming’s art turning the single image into a series of micro scenes, taking the reader from the background to the foreground. With each section of the piece Oeming gives the eye something new and hold them there, the image of the congress person taking a office chair to the dome is particularly striking and perfectly placed.

The use of spreads in this issue is a bit excessive, though fitting in a book filled with cartoonish excess. Not every spread is dedicated to creating a moralistic depiction of chaos. Those spreads are where the decision to tell the scene in two pages as one doesn’t quite work as well. The montage through America may not have always landed, but it was a consistent theme. As the issue moves back to the present of Valentine and his Mom in a dark room, the use of a spread reads as unnecessary. The page design in these sequences doesn’t take advantage of the page space the way those murals did. There isn’t a cool trick of perspective that links everything together, it’s just a fairly standard comic page stretched a bit wider. The panels seem just a bit bigger. These pages fail to do what art team Alvaro Martinez and Raul Fernandez did with their spreads that sold me on their concept, use the space to make micro scenes feed into a larger whole. The creative team achieve this in House of Representative scene. These non-muralist spreads lack the unity and cohesion that make for a nice double page spread.

With all the flashes to other moments in time, “United States of Murder Inc.” #6 could read as discordant. That the series was so overwhelmed with excess and spectacle that it lost any sort of emotional center. Centering this issue around a conversation between Mother and Son, ties the insanity of this issue and series as a whole together, as Valentine learns the moment of inspiration from his Mother. The insanity is the point Valentines Mother is attempting to impress upon her son. “This isn’t normal” and its variants is a phrase uttered by both his Mother and the Don in this issue, but they mean it in different ways. For the Don it is a recognition that recent events have rocked his natural order, he is as they say “shook.” His Mother’s critique is far more biting, that none of this is natural and that assumption has bread a toxic culture of death and violence. The moment of inspiration for what Valentine could be came when she sees the Family murder her Father and Grandfather right in front of her like it was nothing. That’s not normal. The creative team channels the right amount of Martin Scorsese-esque fascination and repulsion of the mafia.

The art team of Michael Oeming and Taki Soma do an fine job making this flashback stand out from the previous ones. Soma colors this book in a fair amount of secondary colors with a splash of neon, they play well with the Oeming’s heavy inks. These flashbacks are given a completely separate aesthetic of more primary colors and screentone effects, which gives it a surprisingly upbeat vibe despite the violence. This aesthetic has enough formal tethers to the book as a whole that you can see how everything slowly began to darken overtime and we end up at the present.

Her theory of the case is made too late for Valentine. He was already in deep, and by the end of things he is well past too deep. There is something tragically understandable about Valentine’s decision to stick with the Bonavese family and swim in their cultural waters. For him, all the violence, murder, and machismo philosophy justifying it is natural. When given the choice between over throwing the established order and sticking with it, the choice is simple after how things have gone. There’s a three panel sequence early on where Oeming cycles Valentine through a range of emotions by shifting the shadows across his face, it was a nice example of how his style can be used to be fluid and expressive and the visual que for how Valentine’s emotional state throughout.

Final Verdict: 7.5 – “United States vs Murder Inc.” #6 continues with the bombastic art and finally delivers the emotional core that ties everything together.