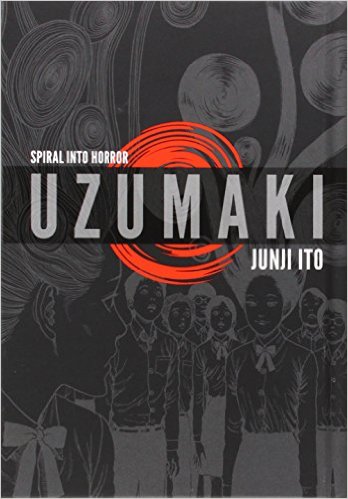 Some years ago, I came across a strange comic online. It was horror, but a different kind than I was used to – something about holes in a fault shaped to fit specific people, and the obsession those people had with entering those holes. It didn’t have much in the way of violence or horrific imagery, but it made it difficult to sleep for a while after I read it. I later learned that I had read “The Enigma of Amigara Fault” by Junji Ito, an acclaimed horror mangaka, and from that point on I was a fan. Until recently, a lot of Ito’s work was out of print in the United States, but Viz Media has begun printing classic stories and newer ones, starting with his seminal “Uzumaki” in a gorgeous hardcover. 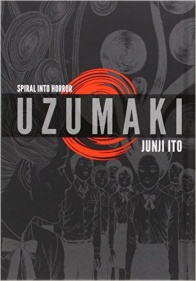 Written and Illustrated by Junji Ito

Kurôzu-cho, a small fogbound town on the coast of Japan, is cursed. According to Shuichi Saito, the withdrawn boyfriend of teenager Kirie Goshima, their town is haunted not by a person or being but by a pattern: uzumaki, the spiral, the hypnotic secret shape of the world. It manifests itself in everything from seashells and whirlpools in water to the spiral marks on people’s bodies, the insane obsessions of Shuichi’s father and the voice from the cochlea in our inner ear. As the madness spreads, the inhabitants of Kurôzu-cho are pulled ever deeper into a whirlpool from which there is no return!

In case you skipped past the solicit text, Junji Ito’s “Uzumaki” follows the inhabitants of Kurôzu-cho as a spiral image begins to seep into their lives in unexpected and terrible ways. The book has an overarching narrative, but begins as a series of short, relatively self-contained chapters. As the comic progresses, this narrative becomes more and more prevalent, until the final “act,” where each chapter leads directly into the next until the very end. While the nature of having the comic follow specific characters in a small setting almost necessitates tying things together in a final conclusion, the comic is at its best in its first two thirds, when the spiral is more a connecting theme than a connecting plot device. Horror certainly can work in the longer form, but there’s a reason why so many of the best horror stories are short stories. The last third, which serves almost as one larger story, loses some steam as it progresses, but thankfully manages to pull itself together for a solid, if not satisfying, conclusion. The other two thirds of the comic, however, are pure horror excellence.

Mainstream American horror movies often emphasize the shocking side of horror, using “jump scares” to give audiences a rush of endorphins that keeps them coming back for more. “Uzumaki,” by contrast, more often than not leans toward the methodical side of horror — though Ito can certainly pull off the frightening surprise when he wants to. The comic is at its best when Ito spends page after page of adding layer after layer of dread, until the tension finally breaks and the reader is faced with that which they feared. There’s an inevitability to the best stories in the book, such as “The Scar,” a sense that there is no escape from the terrifying truth that is only a few more page turns away. This is especially impressive considering the format — unlike, say, a movie, where the events will continue on if you sit there passively, a comic requires the active engagement of turning the page. It’s a testament to the captivating quality of Ito’s horror that the reader feels unable to escape, despite, of course, having complete control over the book.

The other quality of horror that Ito revels in throughout “Uzumaki” is the grotesque. There are a few stories in the book, such as “The Snail,” that aren’t quite what one would call “scary,” and yet are nonetheless horrifying in the way they make the reader’s stomach roil. This isn’t simple torture porn, though; there’s an inventiveness to “Uzumaki’s” more disgusting parts, often laced with irony, that keeps it from seeming a simple exercise in poor taste. It’s a difficult balance to find: if a jump scare is poorly done, we still jump, but we just roll our eyes afterward; conversely, if the grotesque is poorly done, we feel disgust, but continue to harbor strong negative feelings toward the source. Ito’s delightfully twisted imagination toes the boundary of going too far — you might slam the book shut and mutter a few obscenities, but soon enough you’ll be picking it back up again. At least, that’s what happened to me.

Imagination is nothing without ability, and Ito has that in spades. “Uzumaki” is gorgeous in the way a tarantula is: hardly fitting traditional ideals of beauty, but still displaying a dark elegance. It’s not just that Ito is technically skilled — which he is — but also that the comic is a master class in horror comics storytelling. First and foremost is his excellent use of facial expression. Horror cannot be simply a sequence of gross images — we need characters that react to the dark world around them, and we need to be convinced by their reactions. When Ito’s characters are supposed to be scared, you can be damn well sure they’re scared — he exaggerates facial features just enough to evoke traditional understandings of expressing fear, without going so far as to look silly (well, most of the time). Perhaps more impressive is his ability to convey obsession; multiple stories would fall flat and just seem a bit odd were Ito not a master at capturing it (see also his renowned short story “The Enigma of Amigara Fault”).

Of course, horror comics need to actually look horrifying, and “Uzumaki” most certainly does. Even in the first few peaceful pages Ito is sure to use black and grey tones whenever possible, creating an oppressive air that makes escape seem doomed to fail from the get-go. When things begin to spiral into full-on body horror – which isn’t very long, mind you – Ito balances faux realism with exaggeration, using heavy detailing to make the impossible seem possible. This level of detail gives the comic one of those qualities of truly great horror: its ability to stick with you. The book is filled with images that will sear themselves into your brain, only to be recalled a few weeks later when you are just settling into bed. Many of the images within the comic would sound odd, at best, if described aloud – hardly frightening or disturbing – but Ito can both see things in ways that would frighten the rest of us and translate it to the page. Readers will both curse and praise Ito’s drawing talent – it’s his skill with a pen that’s truly terrifying.

One of the more difficult aspects of “Uzumaki” to assess is its dark humor. Across the series, Ito slides back and forth from hard horror to black comedy (see the afterwords if you don’t believe Ito has a sense of humor about his works). Often, the difference is obvious — “Mosquitos” is no doubt meant to make your skin crawl while “Jack-in-the-Box,” besides a couple of startling moments, gets clearly silly by the end. A few stories, though, aren’t quite as clear; with “Medusa,” for example, it is hard to tell whether Ito’s tongue is planted firmly in cheek or if he is trying to scare the reader and failing. The shifting moods of the collection can leave the reader in doubt in a way horror shouldn’t — the more you have to think whether a particular story is supposed to be scary or funny, the less likely it is to be either. It is particularly an issue once you reach the final act of the book; as mentioned above, the story bogs down a bit as it heads towards its end, and part of the feeling of bloat comes from some ridiculous, but not quite funny, directions Ito takes the spiral idea. Overall, the truly frightening stories outnumber the obviously comedic, leading me to believe that most of those that seem to be somewhere in the middle were intended to be the latter — perhaps Ito hadn’t quite developed the knack he had for it that he would later display with comics such as the uproarious “Ito Junji Cat Diary.”

The new one-volume collection of the series from Viz is well worth owning even if you snagged some of the older paperbacks. It’s a gorgeous hardcover, with images from the series printed in dark grey on a matte black background. If you’re the type to put certain books on display by facing them outward on you bookshelf, it will make a nice display piece — though maybe you should put it out of reach of the little ones. I can’t claim to be an expert on book binding (as far as I can tell, it seems to be a combination of sewn and glued), it has the feel of a book that will last you for quite a while.

The hardcover has a couple of extras, namely a “lost chapter” and the comedic afterword comics originally printed in the three paperbacks. Perhaps the only fault to this printing is these afterwords — and for reasons that can hardly be attributed to Viz. The segments are grouped together at the end, but it’s a bit awkward reading them one another as the original intent was for there to be another volume of content between each of them. But of course, had Viz put them in the middle of the single volume edition, it would be equally odd. There’s no perfect solution, and in the end I’d rather have them grouped at the end than interspersed throughout — or, worse, not collected at all — so it’s the most minor of quibbles (but a quibble nonetheless).

While “Uzumaki” isn’t necessarily a book everyone should own, it is a must-have for horror fans. Ito is right up there with Richard Corben as one of the premier horror comic creators, and Uzumaki is a great choice for taking your first dip into the dark and disturbing world of horror manga. Plus, the recent printing is one hell of a book. Just don’t blame me when you’re lying in bed awake wondering what that sound you hear coming from the room next door is.