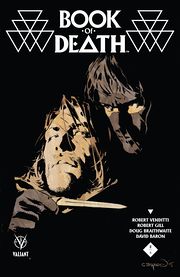 Unity fractures as Gilad and Tama go on the run. Meanwhile, the malevolent force behind the present-day Geomancer stands revealed. 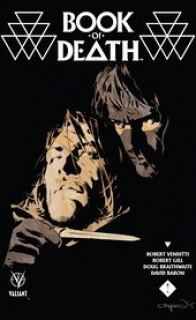 A new Dark Age of the Valiant Universe draws nearer as the events foretold in the Geomancer’s BOOK OF DEATH unfold!

Convinced the unnatural disasters tearing our world apart are a direct result of the new Geomancer’s arrival, the combined forces of the Valiant Universe are forced to confront the Eternal Warrior about his new charge. But to prevent civilization from falling into a new Dark Age, the Eternal Warrior won’t go down without a fight! Valiant architect Robert Venditti (X-O MANOWAR) and rising star Robert Gill (ARMOR HUNTERS: HARBINGER) bring you the next chapter in the summer blockbuster that promises to alter the Valiant Universe as you know it! Plus: new visions of the future that awaits – illustrated by superstar artist Doug Braithwaite (IMPERIUM)!

The first issue of Valiant’s summer event “Book of Death” was an interestingly structured look into the future of the universe. It provided so many strings and opportunities for great stories starring a multitude of characters and concepts. It may have done so slightly to the detriment of the story in the present, but there was hope that the present day story dealing would open up more with its second issue. So, does it?

The short answer is: Sort of kind of?

Okay, let’s start with the great positive about this issue: this is very much a story of the Eternal Warrior, Gilad Anni-Padda. In interviews, writer Robert Venditti has discussed that Gilad has unfortunately come off as “the guy that has to job out to make the threat be serious” and it’s a belief I have shared. It seemed all his appearances in “Unity” were to either give historical exposition or to get his butt kicked. But in this issue, Gilad shows off that knowledge of 10,000 years and why he is an incredibly competent and deadly tactician. From his own weapon skills, to terrain, to using his opponents’ psychology against them; Gilad makes the rest of his Unity teammates look like amateurish children, which they are compared to his age.

And this isn’t at all to the detriment of the other Unity members. Venditti is able to get the voices and actions of these characters down great (obviously X-O the most). One particularly gut wrenching scene is where Livewire hijack’s GIN-GR’s robo brain to attack Gilad. It should be of note that GIN-GR is one of the sweetest characters in the Valiant Universe and were friends with Livewire. On top of that, the discovery that is made about Ninjak just further hammers the nails in for this incarnation of Unity.

Robert Gill and colorist David Baron are on art duties for the present-day story. While this issue doesn’t have anywhere near as many creepy scenes, like the trees and scorpions and ants of last issue, what this team does is still really good. There is a roughness to Gill’s work, and I mean that in a good way. He is capable of showing the aged and tiredness in Gilad’s expressions and the hard emotions of Ninjak despite only working with the characters eyes.

And just because there was more emphasis on action doesn’t mean the art team didn’t bring the creepy. Case in point, the few scenes with the technically present day Geomancer, David, and his captor. Child abuse sucks. I know that’s an obvious thing, but in the list of traits to get me to infinitely hate your villain, that’s pretty high up. And Gill and Baron depict those scenes in a very intentionally uncomfortable way. And while the reveal of the Big Bad behind David was spoiled months ago, because our great system of three-month early solicitations will forever ensure comic journos will get minimal surprises, the team did a very good job with the reveal, the last page being outright hellish with his presence. It’s also a hope that the return of this villain will lead to the revitalization of a certain Valiant property.

Now we get to the part of the book that makes the structure of this story different: the ten-page excerpts from the titular Book that depicts future events of the Valiant Universe (with art duties by Doug Braithwaite and Brian Reber). Last month’s depiction was a broad look at events to come and featured a plethora of ideas. This month’s depiction is much narrower focused. We focus on the aftermath Gilad and his team’s final stand against a great evil and depict Gilad’s “death.” I have to be honest when I say that while I found nothing technically wrong with this excerpt, I didn’t find it all that exciting.

I get it: it was a much more character-focused look at Gilad’s potential future, probably to help align people more with Venditti’s vision of the character for the upcoming solo series. And there is nothing wrong with that. But when I think on all of the concepts I saw in last month’s issue, the Archer-led Renegades, the mass exodus from Earth, the rise and fall of the H.A.R.D. Corps Army, along with other characters we didn’t see (Shadowman, Generation Zero, Timewalker) that I’d love to know more about their future, I feel like this was a bit of a letdown. Perhaps this reasoning comes from my own impatience to see if Valiant will follow through with some of these events they are showing, but it is still how I feel.

I do think this book is pretty decently paced. At 34 pages of content, you are certainly getting a great deal for your dollar. It isn’t out to rush and wants you to get to know the characters. What makes me a bit nervous is that this series may have the same problem that “The Valiant” had in its final issue, where I felt it had to rush a bit more to get to the end. I know I’m talking about maybes and “what ifs” for two issues that have yet to be released, but I have noticed a bit of a pattern with Valiant story arcs maintaining a 4-issue arc. Previously, the aforementioned “The Valiant” and the second arc of “Rai,” both felt like they would’ve benefited from some added breathing room by being five issues. That said, nothing wrong with “Book of Death” now, but the series may need to pick up the pace a bit to avoid cluttering the final act.

Final Verdict: 7.0- While the look into the Valiant’s future was not as interesting as last month’s, the main story has begun to pick up with the reveal of the central villain.