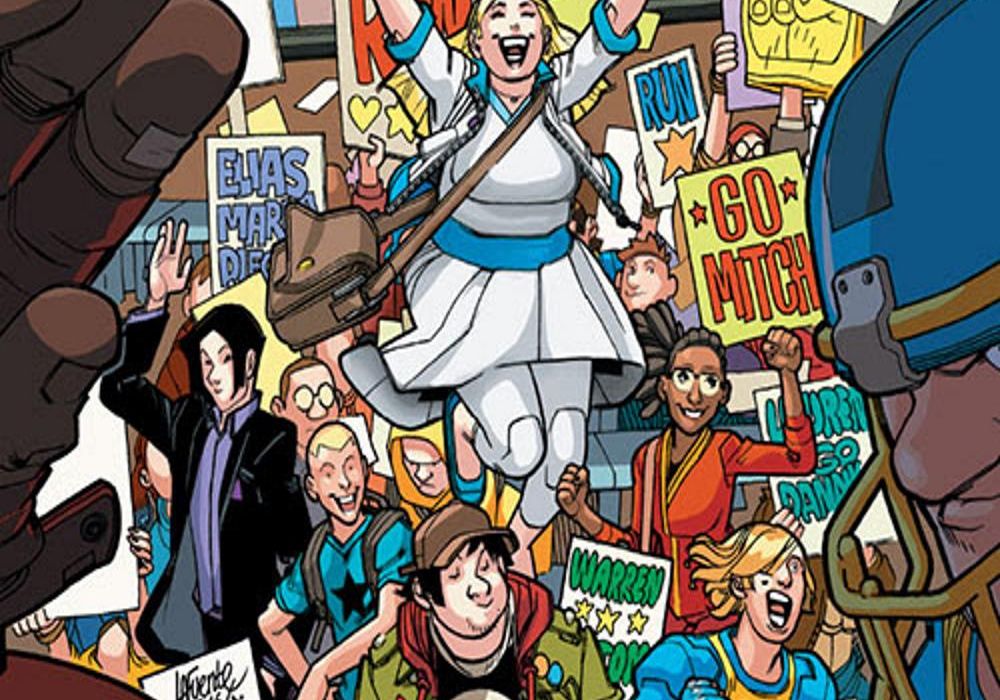 For the right fan in the right mood, “Valiant High” #1 is simply perfect. It takes the Tumblr-friendly fanfic concept of the high school alternate universe and elevates it to actual greatness. Because while also being light and funny, “Valiant High” is a wonderful introduction to the dynamics of the world of Valiant Comics. 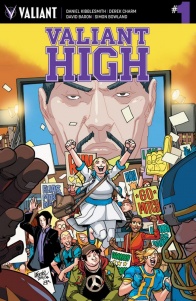 Valiant proudly presents its first ALL-AGES escapade with a pitch-perfect entry point for new fans and longtime readers alike! Before they became legends, the world’s most formidable heroes were roaming the halls at Valiant High – a super-powered preparatory academy where Aric “X-O Manowar” Dacia is a record-setting running back, Colin “Ninjak” King is a debonair foreign exchange student, and Coach Bloodshot is way, way too into dodgeball. Now, Amanda “Livewire” McKee and her best friend, Faith “Zephyr” Herbert, are taking it all in for the first time at the one high school where power trumps popularity!

From rising star Daniel Kibblesmith (The Late Show with Stephen Colbert) and Eisner Award-winning artist Derek Charm (Jughead), get ready for your first day of school inside a hilarious reimagining of Valiant’s award-winning superhero universe – one where the next world-ending cataclysm will have to wait until after prom night! In the tradition of Archie and DC Super Hero Girls, this side-splitting adventure takes place outside of Valiant’s standard continuity…and comes packed with all-new incarnations of virtually every Valiant hero and villain! You’ve never seen the heroes of the Valiant Universe quite like this before!

To those who have not yet taken the plunge, Valiant publishes superhero comics, much like the competition at the Big Two. By limiting weekly output to about three titles, Valiant manages to run a tighter universe with more narrative cohesion than Marvel or DC. Such a tight cast of characters fits really well into a high school setting. And the creative decisions are as hilarious as they are genius.

Some are obvious. The odd couple dynamics of straight-shooter Archer and romantic lout Armstrong make for a great weird duo. Of course Visigoth warrior turned armored spaceman X-O is the football hero. The mysterious Ninjak has transferred here from either England or Japan, and the comic makes sure you’re never sure which. Party girl Flamingo is the qunitessential mean girl. That all makes sense.

Other characters though are more creatively re-imagined. Nerdy ball of sunshine Zephyr is mostly the same, but her friendship with the broody technopath Livewire becomes the core of the story. Psychic strongman Torque is on the football team, so of course he worships X-O. Peter Stanchek may be all-powerful, but in his regular title “Harbinger,” he’s a drug using creep. That’s left pretty much the same here. And of course Bloodshot is a scary gym teacher and Doctor Mirage is a sad biology teacher.

I could probably just list the remixed characters all day. There are so many of them and they are all so delightful. I haven’t even touched upon the emo Eternal Warrior or the sinister principal Toyo Harada. Even the absence of Woody (brother of Quantum) is a joke that kept me smirking throughout. Fans of Valiant will have a great time spotting their favorite heroes and villains.

Even if you’re not intimately acquainted with the characters, it’s easy to see the appeal. A pulpy, action-packed superhero universe is boiled down to its core dynamics. In the regular Valiant universe, Livewire isn’t particularly close with Zephyr, but their high school dynamic easily shows what makes both the characters fun. That goes for everyone in the cast.

Major props are owed to Daniel Kibblesmith, the comedy writer who also has tackled Valiant’s “Quantum and Woody.” But there’s not enough praise in the world for artist Derek Charm. Kibblesmith has a lot of fun and pens some good jokes, but it’s Charm’s style that makes the book work. At first glance it looks like the fusion between webcomics, your grandpa’s newspaper comics, and early 00s animation, but once you take a look at Charm’s other work the through-line becomes clear. He’s worked on “Jughead,” “Powerpuff Girls,” “Star Wars Adventures,” and “The Unbeatable Squirrel Girl.” That last one is the closest cousin to “Valiant High.” It seems that Charm’s style has a lot of natural similarities to Erica Henderson’s Eisner winning style.

I’d stick with “Squirrel Girl” as this book’s closest cousin. Both have a youthful energy and both have a sharp wit. I can easily picture little kids getting sucked into the simple, colorful art style, but the jokes would fly right over their heads. Much like the “Squirrel Girl” interpretation of Spider-Man foe Kraven the Hunter, “Valiant High” is playing with familiar archetypes and taking the piss out of them. The characters are hot-headed braggadocios; they’d be downright unlikable if they weren’t so funny.

Final Verdict: 9.0 – Hilarious, appealing, and packed with oodles of style. To the right reader, it’ll probably feel like more of an 11/10.