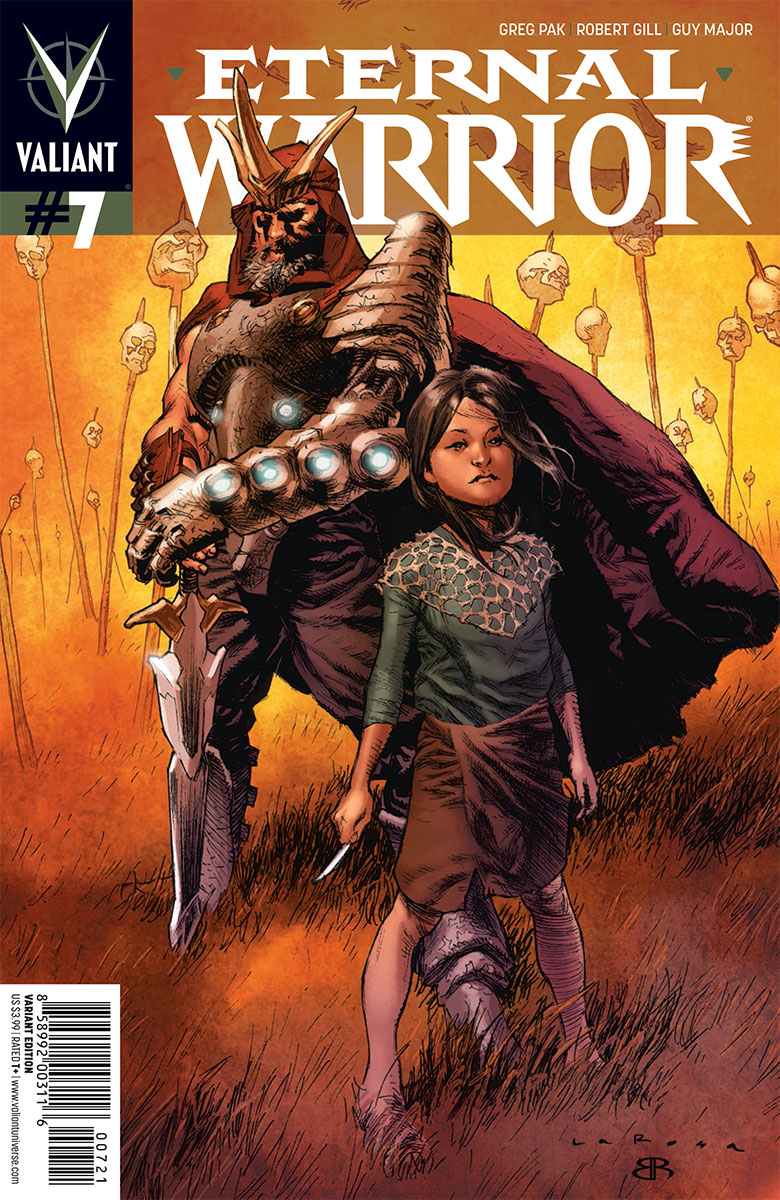 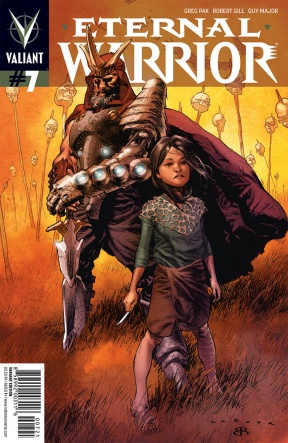 Note: Details in this issue are discussed. Spoilers be here. You’ve been warned.

David: It’s a light week for once, Brandon, but it is a good one perhaps, as a book I’ve been raving about lately – Eternal Warrior – gets its latest issue with #7 from Greg Pak and Robert Gill. This continues the Eternal Emperor arc I’ve been digging, and I’m curious: where do you stand on this bad boy?

Brandon: Well I have to say that I have rather enjoyed this arc. I like it more than I did the first arc by quite a bit. I enjoy that they are utilizing this title to do what I was saying early on could be a benefit for this title, which is telling different types of stories. When you have an immortal character your biggest strength is that you can tell all kinds of stories through time with the character. Valiant intelligently did that right out of the box. Not to mention I love stories about dystopian futures. I love that shit.

David: Yeah, glad we’re on the same page with this then. I really enjoyed this issue and continue to dig the arc, if only because it does a fantastic job of making Gilad seem badass and wise in the ways an immortal guy should, and the addition of his granddaughter Caroline has given him a foil I actually care about. That’s a huge part for me, as his daughter was just a bit of an asshole, but his granddaughter is a sweet chip off the ol’ block. There was a lot to like in this issue, though, as the robo wolves and Gilad turning on the King’s men – who were pointing their guns the wrong way – made for a great explanation of the character in one sequence.

And I continue to really dig Robert Gill’s art, although I have to underline one thing that bothered me about it: when Gilad jumped into fight the robo wolves, there’s a fully page splash that is supposed to be all epic, but he’s holding this tiny dagger thing that he never has again (instead having a gigantic sword). There’s a big part of me that thinks that was a mistake that no one caught, but if it isn’t, it was just kind of dumb.

Overall though, Gill is someone who equally excels at moments both big and small, with action sequences and moments between Gilad and Caroline being handled with equal skill and ability. That dagger, though.

What did you think of the art?

Brandon: Maybe in the skirmish the dagger dropped somewhere? Other than that possibility I have no clue and honestly didn’t even notice it. I was too caught up in the horror of robo wolves! How shitty is this future?!

I also LOVED the gun being backwards. That shit was great.

I think the art is a solid fit. It’s gritty and really lends and air of believe-ability that this world they live in is decrepit and overall fucked. The fights are made more brutal and the future landscape more downtrodden thanks to Gill’s art. I actually think he’d be a good fit on Shadowman. For now I am glad he is on this title. Is he on for some time or just this arc?

David: I know Gill is on for this arc only for Eternal Warrior, and then he moves to Armor Hunters: Harbinger (which will be a three or four issue mini). I think he’ll be a great fit for that, but yeah, he’d crush on Shadowman. He just has a really clean storytelling sense that benefits damn near any book, and I hope he’s someone they lock in and keep on their titles in the future.

Did you have a standout moment in this issue, save for the Robo Wolves or the guns being pointed backwards?

Brandon: Yeah, I’d say the stand out moment for me was the gun being backwards. Or maybe the granddaughter trying to get in on some gun-toting action. That was all very sweet but in a very deadly way considering she is a child. I really enjoy the interactions between her a E.W. Any moment that really stands out for you?

David: Nothing we haven’t discussed already, really. This was a really, really solid book with great art, and they’re doing a nice job of building the future of the Valiant universe. I have to wonder what they’re going to do in other arcs for this book. Are they going to jump around in time? I’d be fine with that, but I honestly have no idea what to expect at this point.

Unless you have anything else to add, let’s grade this bad boy.

Brandon: I would really love for it to continue to jump around time and in doing so tell stories in different genres. I’d love to see E.W. in prohibition, maybe a noir or him fighting as a gladiator. So many possibilities if they play it right.

As far as a grade i’d give this issue a solid 7.8. How about yourself?

David: If we saw him in prohibition, he’d probably run into Armstrong there as we know he was quite active then!

I’ll give it an 8.0. This was another really solid issue that is making Eternal Warrior one of the best books Valiant has to offer. Like with X-O, after the early issues I did not expect that, but I am very glad to be wrong once again.