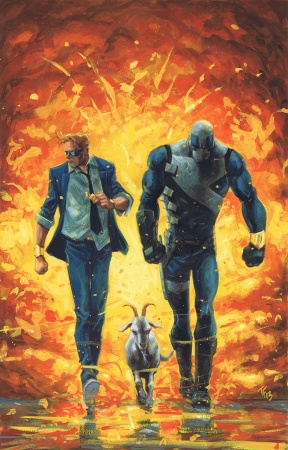 David: It’s the deadly duo day Brandon! We have both Quantum & Woody AND Archer & Armstrong to review! Oh lucky day! Let’s start with a look at the former, as its ninth issue introduces new artist Kano, with the book written by James Asmus. What did you think of this debut for Kano, and the issue in general?

Brandon: Well, per the usual I enjoyed this issue very much. I thought Kano coming on board was a great fit. His style fits very well with the tone of the book and the artists who have graced the pages of this title thus far. While Tom Fowler is the undisputed King of Quantum and Woody art at this point in time Kano came in very seamlessly.

As far as the issue goes, it continued to be one of the most humorous reads every month for me. This issue even shined in the more subtle aspects of a comic. In particular I really enjoyed the text box that admitted they wanted you to go buy the back issues so they weren’t willing to give you too much information. That had me rolling. Well played to all involved. It’s those little things that make a book special and standout. There are constantly little things strewn throughout. It’s similar to what the genius Rob Guilory does with Chew. Not to the same amazing extent as that title but similar.

What did you think of the issue?

David: I have to say, for me, Kano was a shockingly great fit. This is a book that has had marvelous art so far, and Kano kind of feels like a mix of Fowler and Doyle, the two who preceded him. It’s really fantastic work, and I particularly enjoyed the splash of Sixty (or Nine) taking pics of Woody as he fought the robo scientists who weren’t actually trying to destroy the city. It was an instant “I’m in on Kano!” moment, although I shouldn’t be surprised. That guy has been a beast in the past, and I’m happy he’s here now. I just hope he sticks around for a bit.

Meanwhile, my favorite moment in this issue was undoubtedly the one where the Goat was helping with cooking breakfast, and Woody mentions that the fires and smoke always would happen when their dad would cook. Such a smart, subtle and funny moment! This book is so astoundingly good at weaving moments in that hit you on so many levels, and that one was no different. What was your favorite moment?

Brandon My favorite moment was seeing Woody grow as a person in this issue as he realizes he can’t keep calling his clone girlfriend Sixty-Nine. I feel that is a major turning point for the character as he struggles to develop a strong sense of moral right and wrong. I was very impressed.

David: I can’t tell if you are joking about the emotional growth!

Brandon: Emotional growth isn’t something to joke about David Harper.

David: The fact that Woody would make a boner joke somewhere in here underlines how little growth he’s seen, even with Sixty-Nine.

So was there anything else that really stood out to you about the issue?

David: Well, I think the last thing I wanted to mention was the fact that – I THINK – last issue was Jordie Bellaire’s finale, with Kano now coloring himself, and if I’m right about that, he did a phenomenal job of continuing the feel of the colors without losing contact with what had preceded him on the book. Jordie wasn’t listed in the credits, so I presume it’s all Kano all the time, but that guy did a dynamite job.

I also really like the idea for this arc – Quantum vs. Woody with Jacklean in the mix and Sixty ready to kill her for touching her man – and, lastly, I am amazed we went this far without either of us mentioning Quantum wearing a man thong. A man thong! It’s gold, Brandon! Gold!

Brandon: Yeah, those were pretty spectacular.

Should we rate the issue? I believe we should! I give this fine issue a solid 8! How about you David?

David: I can dig an 8.0. It was a really great intro to Kano’s work and another highly entertaining issue. What’s not to enjoy? 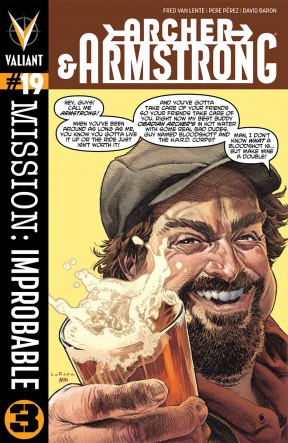 Up next we have Archer & Armstrong #19 from Fred Van Lente and Pere Perez, continuing the Mission Improbable arc. What did you think of this issue?

Brandon: I felt the issue was alright but I feel like as the arc goes along I become less interested in it. It’s a fine enough comic but there wasn’t a lot here that made me stand up and take notice. I think it’s job was made even more difficult because I read it after Quantum and Woody and well…you know.

David: I liked it, didn’t love it. There are some elements I really enjoyed – Kozol’s pre-emptive celebration leading into utter disgust, the expansion of Archer’s power set, Archer becoming a surgeon, Kozol’s badassery, and finally, the preamble to Armstrong vs. Bloodshot – but I can’t help but feel like this is a crossover that didn’t necessarily need to happen. Does that make sense? Like, what comes out of this? We know Bloodshot and H.A.R.D. Corps is ending when Armor Hunters comes, so anything that comes from that doesn’t seem hugely important. Archer & Armstrong…nothing has really hugely impacted either of those characters yet. Is it unfair to ask what’s the point?

I say that as a person who liked it, but even I wonder these things.

Brandon: I really think you nailed it. It just does’t serve any greater purpose as far as I can tell. While not every story has to serve a greater purpose it does still have to be engaging and I feel this story is less engaging as it progresses and seems to serve less and less of a purpose. I’m just ready for the next arc to begin.

David: Oh you better believe it! Pere Perez is a beast, and I love the growth we’ve seen with his art since he first started on Valiant books. He’s one of the best artists around at highly expressive, naturalistic acting characters, and it elevates the book continuously here. On top of that, he adds so much kinetic energy to action sequences – I loved it when Charlie Palmer was attacked by one of his teammates, as Perez killed the push back and what he had to do to stop his momentum – and he really nailed some of the more comedic moments, like Kozol going from the verge of triumph to the agony of defeat in no time flat. That wouldn’t have been nearly the moment with any other artist.

Perez is an absolute killer, and I love seeing him every time he’s on this book or any Valiant book. What’d you dig about the art?

Brandon: I dug the art of the exact reasons you gave. Perez, as usual, was versatile in his work here. He nailed the action but the expressions from the characters were also superb. Any time you can really nail the expressions on the face of a character it goes a long way toward drawing the reader in. When the expression is right it really elevates the script. Without Perez on this issue i’d probably give the issue a much lower rating.

David: Well, I’ve listed a number of things previously, but besides that, not in particular. I’m actually looking forward to this crossover ending so A&A can get back to establishing it’s Sect-centric identity. Well, until it crosses over with Quantum & Woody with The Delinquents, but you know.

I’ll give it a 7.0. That’s on the precipice, and firmly establishes it as a book I liked but didn’t love. What would you give it?

David: That’s it for us this week, we’ll be back next week with even more reviews. Be there or be squared, Valiantheads!