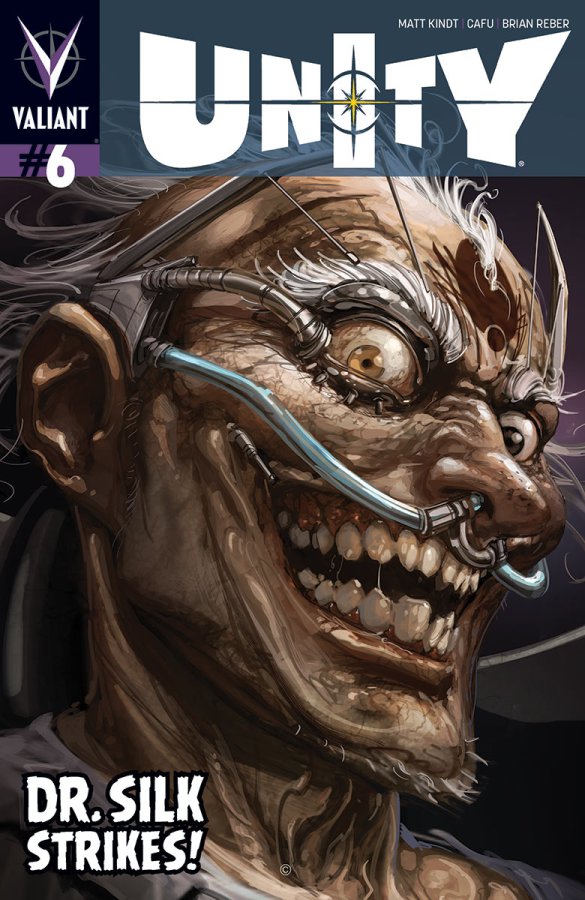 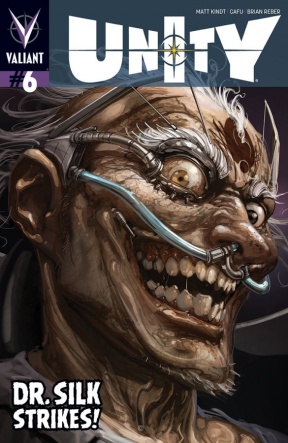 David: Another week, another pair of books, as we get the finale to Mission Improbable in Bloodshot and H.A.R.D. Corps #21 and what’s next for Unity. Let’s start with the latter, as Matt Kindt and CAFU continue the Dr. Silk introducing latest arc. What’d you think of this latest issue, Brandon?

Brandon: I actually really loved this issue. I really enjoyed CAFU’s art and I loved the backstory for Dr. Silk. That is one sick mother fucker! I really enjoyed that because most of the main characters are already developed and have had significant appearances or their own titles, in some cases, you can easily devote an issue to telling the history of a new villain and really establish that villain in depth. We got everything from this issue that we would need to buy into this heel. I really enjoyed it.

What about you playa?

David: I agree. It was an issue that, as you said, took some time to develop a villain, but it was all the more effective because of that. When I look back at my favorite issues of Valiant’s books, my your favorite parts, much of them stem from the villains. Shadowman #0 and its exploration of Master Darque, getting inside Toyo Harada’s brain in Harbinger…you could even argue that X-O Manowar became significantly better when it realized that Aric was a bit of a dick and mostly a hero in his mind, but a villain to the rest of the world. Dedicating some time to Dr. Silk – who’s story is really fascinating and engaging – could be a huge turning point for this book, which as recently as last issue I suggested it was treading water a bit already.

Would you agree with that sentiment that establishing quality villains might be even more important for a publisher like Valiant? Obviously Quantum & Woody is an exception to that rule, but it seems like when Valiant focuses a bit on the villains, good things happen.

Brandon: While I think this book was pretty solid coming into this issue I would absolutely agree that the title was taken to another level by doing such great work with Dr. Silk. A hero is only as good as his villain. That’s why the most successful comic superheroes are those that have great villains. Much like the X-Men have Magneto, Apocalypse, Sentinels and countless others the Valiant universe is doing a tremendous job of building their stable of heels.

I especially feel that it is important for a team book like the Avengers, Justice League and the Unity team, which are compromised of big time heroes with their own titles, so that they have a real purpose to come together. If they all got together and worked to stop purse snatchers whose main motivation was that they loved Coach it just wouldn’t work. Although, it would be incredibly workable for Quantum and Woody. #BrandonandDavidforafillinissue

Overall, I think there are some things, that as a young company, Valiant could improve on but villains are not on that list. I truly believe that the villains you talked about could easily hang with the baddest of the bad in Marvel or DC.

So how about that CAFU?!

David: CAFU is a beast man. A complete beast. He’s got this weird gift of making his work seem both really clean and infused with an old school like feel, but still somehow layering some grit into it. I’m not sure how he does it, but this book really goes to the next level with him on the book, even considering how good Doug Braithwaite was on this book. Whether you’re talking about X-O taking on a billion soldiers or the back story for Dr. Silk, this is a guy who can make any scene and situation work, and he’s not only one of the better artists working at Valiant, but someone who you can really see growth in since he started working.

What’d you think? I know you’re digging him, but was there anything that stood out about his work in particular?

Brandon: I think I enjoyed the way he made Dr. Silk just look as creepy as his backstory. I also like how clear his storytelling was. He did a great job of showing the exchange of the brain patterns without it being confusing. It easily could have been incredibly confusing. I thought it made an insane concept seem very real and very horribly badass. In a demented way of course. He also does a fantastic Aric. Fantastic!

David: One thing I wanted to touch one was the reveal that Livewire is apparently an alien of some variety. That was a really interesting twist, and I think it speaks to Matt Kindt’s mad skillz that he was able to make that come out so organically yet powerfully. Of course the villain is the one who revealed it, but I have to wonder how that’s going to play going forward. I doubt she’s Vine, but could that be a lead in to something big in the future? Not sure, but it’s a cool touch. What did you think about that?

Brandon Well, is she an alien or just not human? I may have msiread it but I didn’t think they clarified. Either way it was a great reveal that made me do the, “Wha huh?!”, which is always appreciated. That’s the upside to new characters, you can always be surprised when the creative team approaches it in the right way. So much going right with this issue. Well, aside from maybe an appearance of us in it.

Only other thing I wanted to mention was how much, for whatever reason, I really dug those symbols and their ability to mind fuck humans. I thought that was a pretty awesome idea. I am sure it’s been done somewhere before but here it was really effective. It also was used well to show how well the team has come together as Livewire told the team not to look and just shoot and they did. A few issues ago that would have happened and I would have questioned their not questioning this. Here though as the team has grown I thought it was a great team moment.

David: By being not human, doesn’t that make her an alien? I guess I don’t know what else she could be.

This isn’t a real complaint, but I can always use more Ninjak. Really dig that character, and considering Dr. Silk is a Ninjak villain, let’s get him prime time, dammit!

Besides that, it was a rock solid issue. I’ll give it an 8, and enthusiastically say this issue surprised me in a very good way. What about you?

Brandon: Well if she isn’t human she could be a computer or android, she could be a mythical creature and the list goes on from there. In fiction and especially in comics if you aren’t human you could be any number of things besides an alien. It’s a strange fictional world.

I would give the issue an 8.5. I thought it was really solid work all around. I’m looking forward to the next issue of this book very much.