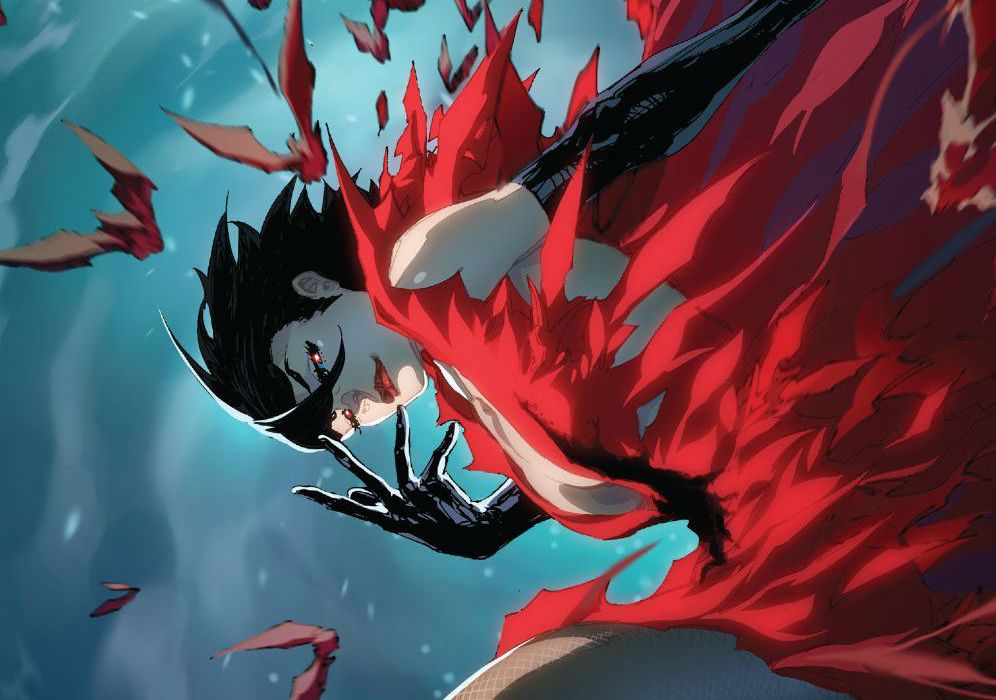 New year. New ongoing for the iconic vampire from the team that brought us “Batman: Knight and Squire.” How does this introduction to the character and upcoming book go? Let’s find out. 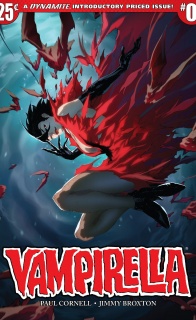 Beginning a new and VERY different direction! Vampirella was last spotted in 2016 doing what she does best—defending the world from threats both mystic and evil. She hasn’t been seen since. Now, over a thousand years later, she’s poised to make her fateful return, but the world that awaits her is unlike anything she might expect—or want to defend! Written by acclaimed comics, novel and television writer Paul Cornell (This Damned Band, Doctor Who) and illustrated by the masterful Jimmy Broxton (Goldtiger, Knight & Squire), it’s the start of an adventure for Vampirella unlike any she’s had in her long and storied history. Don’t miss the train before it leaves the station!

So, ready for a fun fact? I barely know a thing about Vampirella. Oh sure, I know the absolute basic: that she’s a vampire, she’s been rebooted several times and a lot of guys have bought it for reasons other than reading a comic. But that’s perfectly fine (me not knowing much and whatever guys buy the books for I guess? You do you)! Zero issues are meant to be the introduction. To be as new reader-friendly as possible to give people a chance to jump in. And this is coming from the creative team of Paul Cornell and Jimmy Broxton who have collaborated on several occasions, the one most in my mind being a mini-series from several years ago called “Batman: Knight and Squire” which I really dug.

And as an introduction, I can safely say that this wasn’t what I was expecting.

This issue is not only introducing us to Vampirella but to the scenario that she is going to be finding herself in. It is sometime in the future and we are following three individuals out in the wilderness who are trying to find out protagonist. It’s a stark, desolate world (further emphasized by Broxton’s intentionally drab color palette) and it’s made immediately clear that something has gone wrong. A particular line of narration caught my attention: “Paradise has vast empty places. It’s not evenly distributed. That was always the case, right? But now the condition is terminal.” It’s a good descriptor of the environment being traveled in, and a profound example of what we (that is to say, what Post-Trump America and Post-Brexit Great Britain) are going through right now as it feels like it’s all coming apart. It’s just a depressing note that sets the tone for a lot of the issue.

Now, the setting and atmosphere are all well and good, but what about Vampirella herself? Well, that’s a bit more complicated. Vampirella herself is actually absent from the majority of this issue, having been asleep in the bowels of the earth for an indeterminate amount of time but the team decides to be a little creative and inform us on her character in a unique way. Each page leading up to her big revival has one bottom panel running the full page width, completely black with the exception of narration (and a tip of the hat to letterer Travis Lanham’s use of 60s style font and hot pink coloring). This narration is of the sleeping Vampirella and what’s she’s dreaming about. The narration does a decent job of informing the character on Vampirella as a character (such as her lack of desire to be the subject of some prophecy, as the three travelers had been establishing) along with the contradictions in her memories.

That last part becomes more important as she finally awakens, and Broxton nails it. It has incredibly strong linework while keeping those colors very pastel-like. It’s very reminiscent of old horror comics, which, considering the character, is a great way to finally have her big reveal. Broxton then manages to dial it back to show her started surprise and vulnerability at this current time as she has to feed on the travelers who sacrificed themselves to revive her. That vulnerability is further emphasized by the claustrophobic place around her that Broxton depicts. Shadows upon shadows upon shadows that really sell the oppressiveness of this place.

The contradiction in Vampirella’s memories becomes more important when she discovers a book of prophecies that the travelers had on them, which shows Vampirella’s life. And by that I mean the multiple continuities she has had as the property grew, changed hands, and was rebooted time and time again. “Stories of me,” she said, “of all the different things I’ve been told about where I come from”. It and the changes in reality that she senses finally motivate her to gain her resolve, and bring us into the beginning of the story. It’s a very Grant Morrison’s “Batman” approach to just have everything be canon, even if it doesn’t make sense.

“Vampirella” #0 does a real good job, at least for this ready, at what it’s supposed to do: Get me interested enough to take a look beyond to issue #1. I will give a fair warning, this issue is slow. Very slow. The way that Cornell and Broxton try to drip drab bits of Vampirella’s character into the story may be off-putting to others, but as someone who does love a slow burn, I dug it. It’s not vampire-killing action, but more methodical in its storytelling and pace, as well as some wonderfully bleak art. Cornell and Broxton have impressed me in the past and their partnership continues to soar as they take on this new venture.

Final Verdict: 7.4 – A really good introduction for this new(?) incarnation of the character.