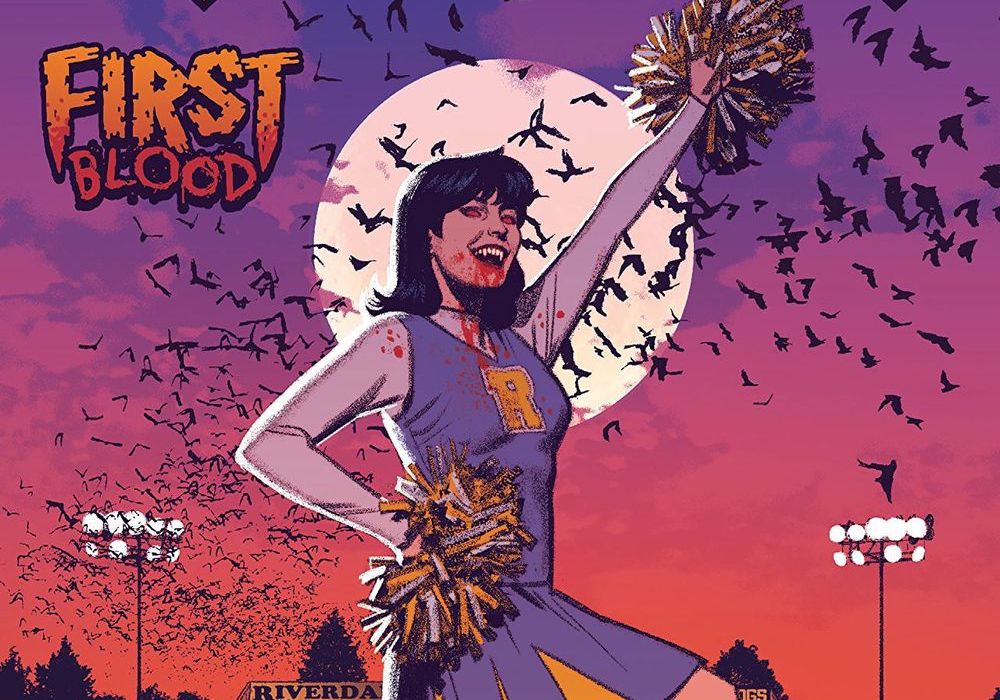 There’s a scene in the 1997 Kevin Smith film Chasing Amy where a homosexual comic book creator posing as a black militant in order to better sell his books suggests Archie and Jughead have always been in a romantic relationship. The joke works because the person he’s trying to convince insists on the fun-loving, wholesome, and heteronormative nature of the Riverdale gang. For him, there is no subtext, there’s only the idyllic Pleasantville reality of Archie and his gang’s world. One could argue though that it’s these types of imaginings of Riverdale that have given the characters of Archie Comics life for decades. In the 21st Century, these fan fictions have become a reality both in the “Riverdale” television show, the flagship comic line reboot (and earlier introduction of Kevin Keller in 2010), and the Archie Horror imprint. But why mess with success? Why risk killing the core appeal of the Riverdale gang with these reimaginings? 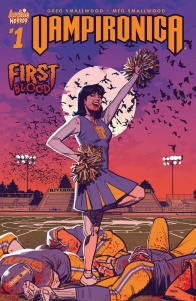 NEW ONGOING SERIES! When Veronica is bitten by a centuries-old vampire, her thirst for blood threatens to turn Riverdale into a haven for the undead. Will she put an end to the vampire threat or give in to her blood lust?

With “Vampironica” #1, Archie Comics continues to embrace the seemingly limitless resource that is the denizens of Riverdale by turning the glamorous transplant, Veronica Lodge, into a cross between Buffy the Vampire Slayer and Blade. But we might be getting ahead of ourselves here. For this first issue, Greg Smallwood and his sister, Meg, set a very familiar table. The love triangle between Archie, Betty, and Veronica is intact. Betty and Veronica are cheerleaders. Archie’s the captain of the football team. Reggie drives a nice car. Cheryl Blossoms is throwing the biggest parties (but with an underage drinking update). It’s all familiar ground until the bloodsuckers show up to crash the party and Ronnie takes them down, making a fabulous entrance and upstaging the popularity that Cheryl tries oh so hard to cultivate. “Who’s up for some body shots?” Few lines would encapsulate manufactured sexuality better than that.

We can almost imagine Cheryl’s envy as Veronica emerges from the Blossom’s pool with two dead vampires in tow, tossing out a cool ’90s action hero bon mot. To be sure, she’s not mad at Veronica for crashing her party or happy that she likely saved their lives. She’ll probably just cry herself to sleep that she wasn’t chosen by a centuries-old vampire to carry such a stylish curse instead. To be clear, we aren’t shown more than one panel of Cheryl’s incredulous reaction to the melee that just unfolded at her party, but we know it, because it’s Cheryl and she’s Veronica, the latter just has fangs now and carries a stake (likely in a cool ankle holster from a New York boutique no one has heard about yet). Since it’s Riverdale, our minds are already adding narrative detail that’s not there even twice removed from the Archie of grocery store checkouts.

The bulk of the issue takes place in a three-days-ago flashback to put the readers at ease that all the usual trappings of this Riverdale exist with one crucial difference, namely, Ms. Lodge becomes a vampire. It’s a simple setup executed masterfully by the brother and sister team of Meg and Greg Smallwood. Relying on the basic premises established over 75 years of Archie books lets this first issue’s setup get down to brass tacks (or stakes, what have you). And that it does. In fact, this issue is such a quick read, the narrative brevity would feel a bit like a cheat if not for the Greg Smallwood artwork.

Greg’s art is at one of the more interesting junctions of cartooning and photo-realism. Working digitally, Greg lays down his trademark toothy line, and, although he uses some 3D modeling tools to help maintain a consistency in his character designs, his pages still feel very organic and handmade. He has certainly perfected a style that is both lush and economical. Every panel exudes a confidence in line and form born out of hours of work at the drafting table (or tablet). And if we weren’t already convinced of his mastery, he handles the coloring chores as well.

The renderings of the characters are both new and familiar, remaining true to their traditional roots with a modern twist. Archie keeps his trademark freckles and crosshatched fade. Betty has the high ponytail. Veronica has the raven bangs. The book is a beauty to behold. Each page is a master class in rendering, pacing, transition, and design, but where Smallwood really excels is in the body language of these characters. Every panel feels like a it’s capturing the most interesting movement or facial expression possible to convey the necessary emotions or story beats.

As for the story here and the installments to come, the Smallwoods must know we’re already fleshing out the details of Veronica’s life as a new vampire. Archie readers have been doing it for years. Why should it change now? Again, it’s why these reimagining work so well, by taking the essence of the Archie characters and developing them in a way that’s still familiar if slightly off center—like a DC Elseworlds tale or a classic Marvel “What If?” story. Why would it surprise anyone that the headstrong and effortlessly cool Veronica Lodge would buck horror-trope tradition by hunting the very thing that she has become. If Betty had been bitten, it wouldn’t have worked. She would have gone along with the curse and even baked some blood brownies for those dreamy vampire boys—killing them with kindness. It had to be Veronica, the vampire killer, the girl with the quick and withering comebacks. We can already imagine her thinking, almost instinctively, that these old vampires are so passé. She’s just putting them out of their misery.

Oh, and Kevin is going to make a great vampire-hunting sidekick, but we’re getting ahead of ourselves again.

Final Verdict: 9.0 – “Vampironica” #1 is comic storytelling perfection: beautiful to look at, a joy to read, and more comforting than any vampire story has a right to be.