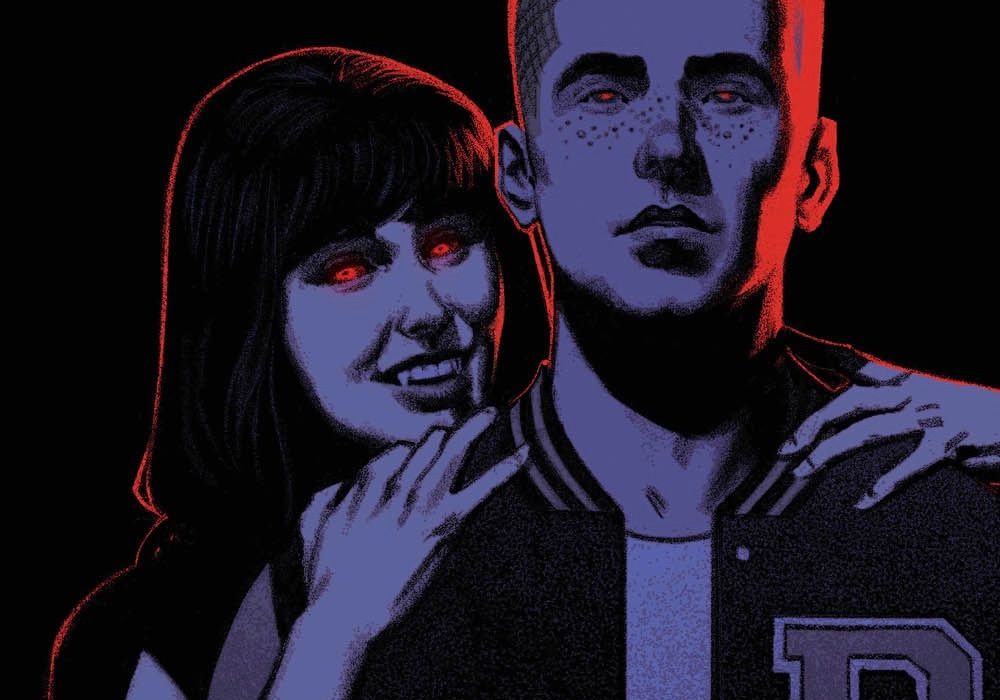 Some of the other, more well known Archie properties may be the main course, but the horror-themed spinoffs are a just dessert, allowing readers to explore often hidden facets of characters we thought we knew so well. In “Vampironica” #2, for example, we learn that Veronica Lodge can be – gasp – likable. (Warning: minor spoilers ahead.) 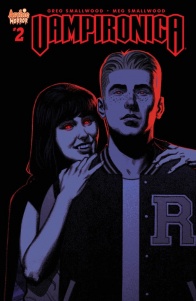 The smartest student at Riverdale High uncovers Veronica’s secret. Will he lend a helping hand or try to drive a stake through her heart?

Given the frenetic pace and nearly complete lack of exposition in the debut issue, it’s no surprise that “Vampironica” #2 pumps the brakes. Whether or not that’s a good thing probably depends on your understanding of and appreciation for the ever expanding, increasingly fractured contemporary Archieverse.

Certainly, you can pick up and read “Vampironica” without anything more than a passing familiarity with all things Riverdale, but it won’t be quite as much fun. In fact, unless you’re fairly well versed in the core cast of characters and the relationships between them, your experience of the series is sure to lack the nuance and deeper understanding of a more knowledgeable fan. To be clear, the spotlight shines on Veronica Lodge, but in the pages of this installment, she shares the stage with Dilton. And if you’re first reaction is, ‘Who the heck is that?’ You inadvertently proved my point.

As the book begins, Veronica wanders the woods alone, stumbling through the literal and figurative darkness as she struggles to understand what the heck just happened. Unsurprisingly, her first instinct is to seek out Archie and that’s where the fun begins. Naturally, her on-again/off-again boyfriend is with Betty. (Indeed, that’s exactly how this perennial love triangle tends to work.) Even more inconveniently, the two of them are alone on the couch, watching a vampire movie – a choice that is emblematic of the fine line the book constantly walks.

On one hand, it seems a bit too clichéd and overwrought to have an actual vampire movie playing while the newly vampiric Veronica peers in through the window. On the other hand, it perfectly sets the stage for Veronica’s snarky interior monologue. “Total chill night, my ass,” she thinks, adding moments later, “Ugh. Pretending to be scared? That play is as old as your last manicure, you little faker.” All the while, artist Greg Smallwood’s delightfully rendered, incredibly expressive panels efficiently tell the story while somehow simultaneously acting as a tongue-in-cheek meta-commentary and authentic ode to b-movies. Throughout this scene, at least, the pacing is damn near flawless and the shot selection on point.

What follows after that is a lengthy sequence that essentially centers on Dilton, a typically tertiary character who suddenly finds himself with a much bigger part to play, whether he wants to or not. Honestly, despite his eternal awkwardness and demonstrably low social I.Q., Dilton is the perfect choice to both take care of Veronica – “I can give you some more blood in the morning if you need it” – and help her fill in the blanks. I mean, you have to admit, no one else in Riverdale could so deftly and so calmly explain Romanian folklore, Vlad Dracul, the Order or the Dragon, and how a master Strigoi can hold multiple Moroi under a spell, “thus turning a typically raucous horde of Moroi into a single-minded army of the undead.”

Ultimately, as noted above, if you’re a fan of all things Archie, you probably find this line funny and charmingly absurd. Conversely, if you’re a hardcore aficionado of all things vampirific, it must sound cheesy and utterly basic. It’s certainly not a new take or bold addition to the vast expanse bloodsucking mythos. To me, that’s precisely the point. It’s just another way to reimagine and have fun with a group of characters we already know.

In any case, whether the dialogue penned by the sibling co-writing team of Greg and Meg Smallwood grabs you our not, Greg Smallwood’s illustrations continue to be on point. In fact, they’re perfectly suited to the Archie Horror brand. Smallwood’s colors are appropriately dark and gritty – like film that is faded and scratched – with effective but minimal shading that gives everything nice depth. The colors are subdued, as befits the subject matter, but never muddy or overly dismal. There is a distinct ray of hope beneath the dark veneer.

Structurally, the flow is outstanding, with an excellent blend of close-ups and wider shots. The scenes are always well grounded, giving us a clear sense of exactly where we are, yet characters’ faces and expressions clearly take precedent. The emotional tone of the story works exceedingly well throughout.

More than anything else, however, this book largely succeeds due to our unusual connection with the titular character. As Riverdale’s preeminent heiress and social climber, Veronica Lodge has always been predisposed to prey upon others and feast on their life force. Now, she’s a vampire, too. Ironically, in this iteration, she’s also more fully human and much more vulnerable than we’ve come to expect. She’s actually quite likable here. As is not always the case, we want to root for her and see her succeed. And that’s unexpectedly fun.

Final Verdict: 8.0 Veronica is clearly the star, but with Dilton as her unlikely sidekick, she suddenly feels like a hero, too. So if you’re already a fan of the Archie multiverse, you’re bound to like this fresh take on one of Riverdale’s most iconic characters.