Eddie Brock is having strange visions and his symbiote is nagging at his psyche, all the while as he tries to be the Lethal Protector of the night. But the appearance of a mysterious man who claims to know the secret of the symbiote threatens to fracture any form of peace for ol’ Eddie. 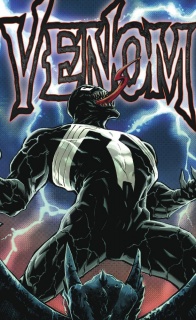 In the wake of S.H.I.E.L.D.’s collapse, an ancient and primordial evil has been awakened beneath the streets of New York, and with it, something equally evil has awakened in that most Wicked of Webslingers – VENOM! Still a Lethal Protector of the innocents in New York, this never-before-seen threat could force Venom to relinquish everything it holds dear – including Eddie Brock! Join two of the hottest creators in comics today, Donny Cates and Ryan Stegman, for a VENOM adventure a thousand years in the making!

Villain books can be difficult to pull off because writers can struggle to develop their protagonists or give the audience reasons to care. Sometimes supposed villain books can lack an edge or a bite. However, Donny Cates delivers an immensely atmospheric, haunting psychological and body-horror tale. What makes “Venom” so satisfying is the fact that it works on a variety of levels. It’s an eerie horror, gritty antihero, psychological suspense, and conspiracy thriller comic all in one. But while reading, it doesn’t feel like a cramped, disorderly mess one might assume a comic with so much going on would be. Instead, Cates keeps the pacing and exposition crisp so the story clips along and never drags.

Marvel couldn’t have scored a better artist for this script than Ryan Stegman. As good as Cates’s script is, it wouldn’t have had the same power if Stegman’s grungy, Gothic art wasn’t present. His pencils are reminiscent of Todd McFarlane or older an Greg Capullo, with so many acute, razor-sharp details. The mood and atmosphere are elemental, where lightning cracks across the sky and fires roar uncontrollably. This issue feels subterranean, taking place in dank slums, grimy tunnels, and abandoned warehouses, and Stegman fills these locations with pointedly dilapidated details. Scenes of combat or action are brought to life by Stegman’s pencils. But on the other hand, moments where dialogue or atmosphere play a hand are arresting as well. On a side note, some of the lettering is hand drawn, which is a brilliant little detail that just adds so much to the series’s attitude. Other great details include Venom’s form. When he’s not fighting, he has lips like Todd McFarlane’s version, but when Eddie goes after a convoy, his fangs are out as he is most commonly illustrated.

Frank Martin completes the grim tone. Interiors are coated in sickly grays and light shades of green and yellow. However, when Venom takes on some monstrosities in a tunnel, you can practically feel the heat from the orange and yellow colors.

Although Venom is a hulking beast, Cates slips us into Eddie Brock’s perspective and his tormented POV. The best way to bring a powerful character low is to give them fears and vulnerabilities, and it’s hard not to get instantly sucked in. Even the relationship between Brock and the alien hangs precariously. Which begs the question—what is Eddie Brock really without his armor? And how will Eddie hold up now that his alien tormentor is screaming louder than ever but it’s necessary to find some abstract form of closure or understanding?

To alleviate some of the misery, Cates uses dark humor to his advantage, specifically with a new iteration of Jack O’ Lantern, who gets a little moment in the spotlight, pathetically attempting to sell high-powered guns that Norman Osborn supposedly used as the Green Goblin. (“On his big . . . glider thing. Chock-full of machine guns. I’m tellin’ you.”) Each character’s dialogue stands out, brimming with personality. One of the best scenes is when Eddie is confronted by an ex-military agent who gives the bewildered antihero the lowdown on the symbiote. Their conversation is a masterclass of push and pull, call and response, where two figures realize they need each other but are still suspicious and wary, which generates conflict and unpredictability.

Cates has struggled to make streamlined POV monologues with series like “Thanos,” but most all of Eddie’s thoughts are effective at conveying information while not insulting the reader’s intelligence. There’s a chilling contrast between Eddie’s haggard thoughts and the intrusive, terrifying screeches of the Venom symbiote.

Without giving anything away, Cates is setting up some revelations about the symbiote’s past and how it’s affected others. While this first issue is more of a tease for things to come, there are plenty of little nuggets of information revealed that whet our appetite for the rest of the run/arc. Writers present and past love to spread the symbiote around to other corners of the universe and/or characters, but Cates is setting the stage for something more fulfilling, complex, and insidious in the issues to come. The idea of exploring the ancient history and impact of this alien is such a fantastic, rousing idea, it’s a wonder why other writers haven’t done so already. Cates reveals and asks just enough to entice us, but he doesn’t go overboard and reveal his hand.

Final Verdict: 8.7 – Even if you’re not a fan of “Venom” or villain books, Donny Cates and company are already delivering a rich, haunting story that works on a variety of levels.

Alex Curtis presides in Connecticut. Feel free to contact him at https://alexcurtisediting.wixsite.com/alexcurtisblog