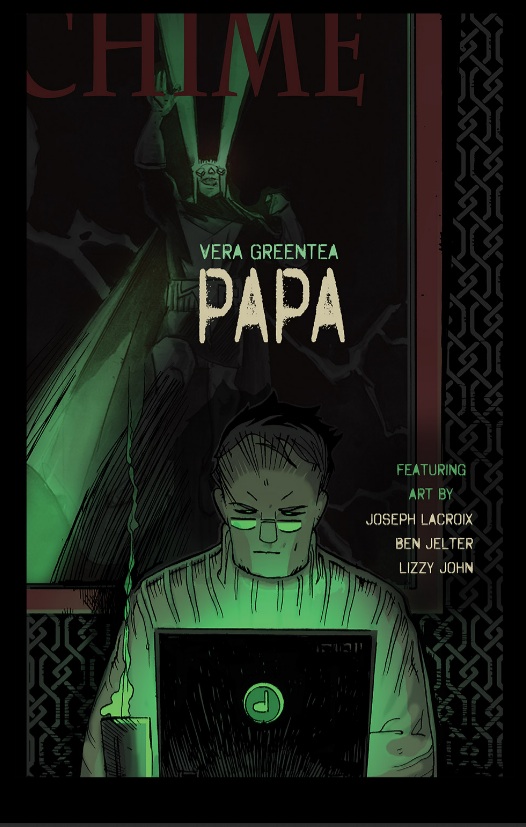 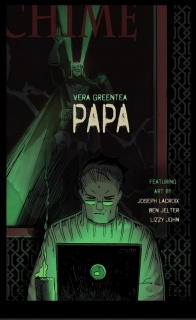 Vera Greentea presents a Father’s Day comic book collection of dark fantasy stories. Each of the three tales focus on a decision made by a father – regarding, or sometimes ignoring his child – and the consequences on the rest of the world. With art by Lizzy John, Joseph Lacroix and Ben Jelter, PAPA blends evocative storytelling with haunting images to create deeply frightening worlds.

Over the course of three distinct stories, Vera Greentea explores variations of the same type of father figure when faced with different, fantastical challenges in different settings. Like an artist painting variation after variation of an object as a “study”, Greentea finds fascination with the push and pull between paternal duty and life that exists beyond the familial. Greentea succeeds in finding variation by deliberately placing minor ambiguity and subtext in her narratives. There’s room for redemption and perhaps hope once we’ve left each story, even when things seem frightening and chaotic.

In the first tale, “Papa”, a famed superhero crashes near the household of a man who just happens to be writing a life-long biography on the crusader. The heroes’ arrival turns everything upside down for a family that was already struggling due to the father’s obsessive attention to his work. This is the tautest and most intriguing of the three stories, as Greentea takes some terrific risks with the narrative and ends the story on a daring note.

Joseph Lacroix’s artistic approach reminds of “Umbral’s” Christopher Mitten, wherein uninhibited lines come together to form clear and detailed images, the expressiveness of said images all the better for it. Lacroix’s staging has tremendous structure, even while looking intentionally raw and stylized. The boy in the story lives in psychological fragility, which comes through in the art as he huddles in the dark corners of his bedroom. Lacroix favors emotion over everything else, absolutely knocking home the final page that Greentea set out for him. All at once, Lacroix captures the joy and hopefulness out of a moment that is also a tremendously shocking place to end the story.

“The Princess and the Robot” sees the ruler of a kingdom in a fantasy world weighing the slow and ongoing terrorization of his people against the well-being on his only daughter. How much will a king subject his own daughter to for the sake of his kingdom? Quite literally a “Sofie’s Choice” for the ages. I’ll not spoil the details of this, but of course they’re horrifying. That’s the name of the game in Greentea’s “PAPA”, which brilliantly keeps the stakes high, even in fantasy settings that aren’t that relatable. This story is the most humorous, even if the humor is definitely dark. Again, the story ends on a bittersweet moment of shock. It can definitely be debated whether this ending is happy or sad.

Ben Jelter’s clean cartooning sells a lot of the humor through over-the-top expression, and ultimately succeeds in mixing monstrosity with levity and even a dash of warmth. His style recalls the clean, classic approach to the medieval fantasy of something like Linda Medley’s “Castle Waiting.” This is a world that looks like an ordinary monarchic kingdom – until it’s not, and the horror kicks in. As with Lacroix in the first story, Jelter nails the tone of the final page, kicking us in the gut with a variety of feelings, unsure of which of those feelings should be the prevailing one.

“Nightbirds” is the most complicated, and ultimately the least successful story of the bunch. Greentea offers a strong concept, a high-stakes moral dilemma, and some really raw emotional writing and artistry, but it gets overly wordy and expository in the middle where the punctuality and economy of the first two stories really maximized their potency. Here, a father tirelessly works to save a dying world, and in turn save his dying daughter. Again, the obsessive approach to the moral dilemma puts the father in a questionable light, and brings conflict to the household. While this is the most fantastical of the bunch, it’s additive to Greentea’s very grounded approach to fatherhood as a balance of duties where neglect becomes very real if you’re not careful.

Lizzy John’s painterly art accomplishes the grand and spiritual arc that the story goes through. Though this segment does get a little bogged down in the middle, John matches the raw emotion beat for beat, creating an uneasy tension between all of the principle characters. The artistic approach to “Nightbirds” particularly soars when the father literally soars to the skies to find a solution to everyone’s problems. The sky is a yellowing dusk, evoking the veritable “dusk” that the population of the planet is preparing for. In between these moments, John handles the challenge of creating a combative environment for some difficult conversations to take place in. As an aside, Adam Wollett does triple-duty in lettering all three stories using distinct, suitable fonts to cleanly deliver the scripting.

Vera Greentea and her terrific art pairings really went at this with an admirable focus. Superhero comics (really, storytelling in general) is filled to the brim with “bad dad” or “bad parent” stories, but few of them are ever as even-handed and balanced as all of these were. Through the prism of a variety of genres, the conclusions are similar, but each approach feels fresh and new thanks to three distinct approaches. There’s pockets of hope and redemption to be found, but ultimately “PAPA” is about fathers making choices and then living with the ramifications. The hope lies in the fact that (most of the time, anyway) it’s not the end of the world.

Final Verdict: 8.7 – Buy, either on Comixology or at the Greentea website