DC is continuing its diversification at the fringes of its line, putting out another miniseries that introduces a new version of a classic character. Keep reading for our (more or less) spoiler-free review. 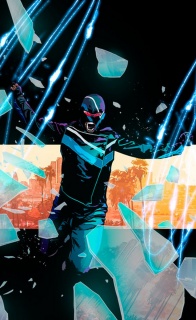 Donny was feeling pretty settled in his cushy life. Even though his girlfriend was politically active, he never gave social justice or racial issues any time. So, when Dorrie discovers something she shouldn’t have and ends up dead, no one expects Donny to be the guy to carry on her work—but that’s exactly what he does, putting on a mask and taking to the streets. He soon finds himself tangled in family history, political conspiracy, and a plot that goes far deeper than he ever imagined.

With all of DC’s efforts to bring back certain characters/iterations in the light of ‘Rebirth’ – think Wally West, the classic JSA, Lobo – it is a bit unusual to see them completely start from scratch with Vigilante. Sure, there are a few nods to past incarnations – Dorrie is pretty close to Dorian, the first name of the last Vigilante – but more or less, this is a new story with a new cast of characters.

It is also a story that is unapologetically about the African-American experience, and experience that I am a mere observer of, as I’m not African-American. This isn’t to say that the story is hard to understand or confusing to an outsider, because that would be absurd. But to not mention its deep seeded blackness would be to dismiss a huge part of the story. The book – even if you took away the Cornell West namedrop and the backdrop of protesting – has a strong undercurrent of the counterculture, and is refreshingly clear on what type of story it aims to be.

The story begins with Donny and Dorrie, a couple who work together at a university in Los Angeles. Donny is a former professional basketball player who now works as a custodian, and Dorrie works at the university in an unspecific role (I would guess alumni relations, based on one line of dialogue, but that’s just a guess). Dorrie is very political and socially conscious, Donny likes to get high and play basketball. The book quickly establishes the dynamic between the two: Dorrie is trying to better not just herself and Donny, but her community at large. Donny is sympathetic to that, but really doesn’t have too much interest in anything other than skating by.

That all changes when tragedy strikes, which is spoiled in the solicitation. I’m not going to get into too much detail here, but it is fair to say that Donny’s life is rattled, and it causes him to try to get answers as to what happened to Dorrie. That pursuit gets him off the couch, and has him turn to an unlikely place for help: his father, Percy, with whom he has an icy relationship. The dynamic between the father and son begins to thaw over the course of the issue, but it is clear to see that there are deep seeded problems here, ones that probably won’t ever really be resolved.

The reason that the father/son stuff works here is that it is a really nice example of two characters who disagree with each other and, at least in one instance, actively dislike each other, finding common ground when it is ‘important’ enough. In lesser hands, they would end the issue by saying “I love you,” and there would be a real path to reconciliation. That isn’t this comic, and I’m glad it isn’t.

Gary Phillips, the writer of the miniseries, has a history writing crime stories, and it is in those moments that the book really shines. We see Percy, shady as he may be, getting results, and his tactics don’t seem over the top or cartoonish, as sometimes vigilante (pardon the pun) justice can seem. Donny isn’t quite ready to get his hands dirty yet, but he has no problem with Percy doing so.

The book is rather vague with a lot of the background details of the story. We don’t know what, exactly, Dorrie was protesting or investigating, and we aren’t much closer at the end of the story to knowing that either. In some ways, that is a brilliant move by Phillips, who puts us exactly in Donny’s shoes; he’s trying to honor her, but really has no idea how to do that.

Elena Casagrande, who handles the art, does a nice job setting the book in Los Angeles, and not the Los Angeles we are used to seeing across media. This isn’t a story in Hollywood or Beverly Hills – the Southland represents the larger Los Angeles area, which encompasses far more than just the glamorous parts. Casagrande’s settings look a little shady, but also like the types of places that most folks who live in a city live in. Her work, overall, is very subtle and fits the tone of a crime/street level book very nicely.

I particularly enjoyed the symmetry that she uses in the first few pages, showing Donny both as a basketball player and masked crimefighter, and using similar body language to show how his skills as the former may influence the latter.

There was just one artistic choice that confused the hell out of me. When we first meet Donny, he has a shock of hair that looks almost like the beginnings of dreadlocks. After the traumatic event, he sports a shaved head, but we are never given any indication of the transition. This is the definition of tiny, but I honestly was confused on first reading, as I couldn’t pinpoint if that was actually Donny or not for a few pages, until someone refers to him by name. Now, it makes total sense that he would want to clean up for the funeral, but little touches like this take people out of comics all the time. I always talk, when dealing with giving a presentation at work, that you never want to give folks an out – a chance to consider something else or shift their focus. Giving the audience an opportunity to ask, “Is that Donny?” is a mistake, even if it is a minor one.

The book, more than anything else, feels very mature, and I don’t mean that because DC lets the word “shit” appear thrice in the story. It is mature because it is a nuanced take on what costumed heroes are, and where they come from. The language matches the tone of the book, the setting, and the style of story that this is telling. I get why DC wants “Superman” to be safe for the whole family to read, but is any kid really going to dig into “Vigilante: Southland?” I wouldn’t think so, and so the tone is appropriate for what the story is: a tale of loss, justice, and connecting the dots.

Overall, the book works in a few different ways, and provides a story that does justice (again, pardon the pun) to the history of the Vigilante character, even if we get precious little Vigilante action. We see a tiny bit of Donny in the suit, presumably in a flash-forward to later in the series, and we get equally little time of his predecessor in the suit as well. But the story is building to the cover: the costumed hero taking revenge. It is only a matter of time before we get there, but if the story continues to be as mature and well rounded as the first issue is, people won’t mind the wait.

Final Verdict: 7.5 – A strong start to the new Vigilante story.