In “Star Wars” #4, the heroes take a break from the near constant action of the first three issues, while familiar villains meet and likely end up sand in some uncomfortable places. 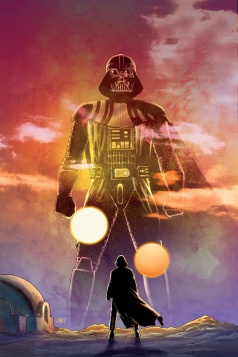 THE GREATEST SPACE ADVENTURE OF ALL TIME CONTINUES!
• Luke Skywalker is NOT a Jedi-not yet, at least.
• He’s only ever met one Jedi in his life…and he died.
• So, Luke’s quest leads him back to Obi-Wan’s hut…on Tatooine.

The first three issues from Jason Aaron and John Cassady feature a ton of classic Star Wars action as the trio escape from an Imperial Base. It was thrilling and exciting, and you could almost hear John Williams score. This issue is definitely the quietest instalment of the series thus far, and it makes for a good change of pace. It can’t be all space opera action all the time, and even the original film features quiet moments, such as when a woman who watched her home planet destroyed and billions of people killed comforts a guy who saw one old man willingly sacrifice himself knowing full-well he’d become a Force Ghost.

Whereas the film ends right after the big explosive climax, this series has the potential to show a different side of these incredibly familiar characters. Aaron’s story in this issue allows readers to see what happens when they aren’t kicking Imperial butt. He really nailed the personality of the trio, and really makes it clear what kind of tense emotional state they were all in by the team A New Hope wrapped up. Luke is suffocating in self-doubt, Leia is almost bursting at the seams with her desire to continue the attack on the Empire and avenge Alderaan, while Han is getting more agitated and fidgety the longer he has to supress his lone wolf tendencies and be a team player.

Aaron takes a quick dive into the seedy underworld of bounty hunters and, as anyone familiar with the writers’ creator-owned work knows, this is very comfortable territory. Aaron excels at writing morally ambiguous characters, and he always manages to make them feel like more than just a collection of outlaw clichés. He introduces a new antagonist and in less than one scene establishes her as something far more capable than typically bounty hunters, and could possibly go toe-to-toe with Boba Fett. It’s encouraging that Aaron is not content to rely solely on the familiar villains we know from the original films, but instead is evolving the story into unfamiliar and unexplored territory.

The choice to have Darth Vader return to Tatooine is interesting, and not just because a similar event just occurred in the self-titled Vader series. Fans of the previous generation of stories will likely remember several instances where it was explained Darth Vader would never return to Tatooine. This was because the planet symbolized everything about Anakin Skywalker that Vader was trying to forget and escape from. Vader presented a cold merciless exterior, one that came to define his whole being but as Luke proved, the core of Anakin was still there. To return to Tatooine would be to risk awaking this part of himself, and Vader wouldn’t risk that. It also explains why Obi-Wan Kenobi would choose to stash baby Luke on the desert planet, because otherwise it seems like a really silly decision.

Now this was all admittedly in the pre-Disney continuity, and they are free to change as much as they want about the Expanded Universe no matter how much us fanboys and girls whine about, it would have been interesting to see a bit more of Vader’s internal state as he returned to his home. Jason Aaron does include a small moment where Vader is reminded of his past, but it’s just enough to whet the appetite of readers. Given the fact that Aaron is beholden to such a large cast of characters, he should be commended for still managing to include interesting character moments such as these, but we just know that there is a lot going on beneath the surface.

John Cassaday has jumped headfirst into the Star Wars universe, and his artwork demonstrates his ease at handling these iconic characters. His character work for Leia, Luke and Han in this issue looks completely photo-realistic, like they walked straight out of the film onto the page. I even found myself looking for Harrison Ford’s trademark chin scar. There’s a scene between Leia, Admiral Ackbar, Mon Mothma and Jan Dodonna where Cassaday’s skill has a penciler and an inker truly shines. His contrast of light and shadows gives the scene a real dynamic feel, even though it only consists of four characters arguing.

As this is a quieter issue, Cassaday relies mainly on character expression and body language to effectively convey the drama. Luke looks especially tense, like a coiled spring ready to pop, and his visually apparent distress ensures that he does not come across as whiney, The brief moments of action are handled well, and Cassaday even manages the difficult task of making a group of Rodians appear somewhat visually distinct.

The one moment where the art falls a little short of expectations is when Vader and Jabba head out for a day-time pleasure cruise on a sail barge. The Stormtroopers in the background appear flat and oddly bunched, and the entire location is easily the least visually interesting location in the issue. To be fair, it is an artistic challenge to create strong visual emotions when one character wears a mask and the other is a giant slug.

“Star Wars” #4 changes the breakneck pace that the series was quick to establish, and the creative team effectively uses the opportunity to explore these iconic characters a little more. Jason Aaron has a strong grasp on what makes these characters tick, and shows their emotional state after the destruction of Death Star in way that is much realistic, and much less rosy, than what we have seen in the films. John Cassaday does great character work throughout the issue, and Han, Leia, Luke and the rest appear just as they do on screen. There are one or two uneven moments, but overall this quiet does not drag or feel boring.

Final Verdict: 7.5 – “Star Wars” #4 finds the characters taking a bit of breather, as the creative team works to set up future storylines. It is a definite change of pace, but fortunately an enjoyable that will please the majority of fans.