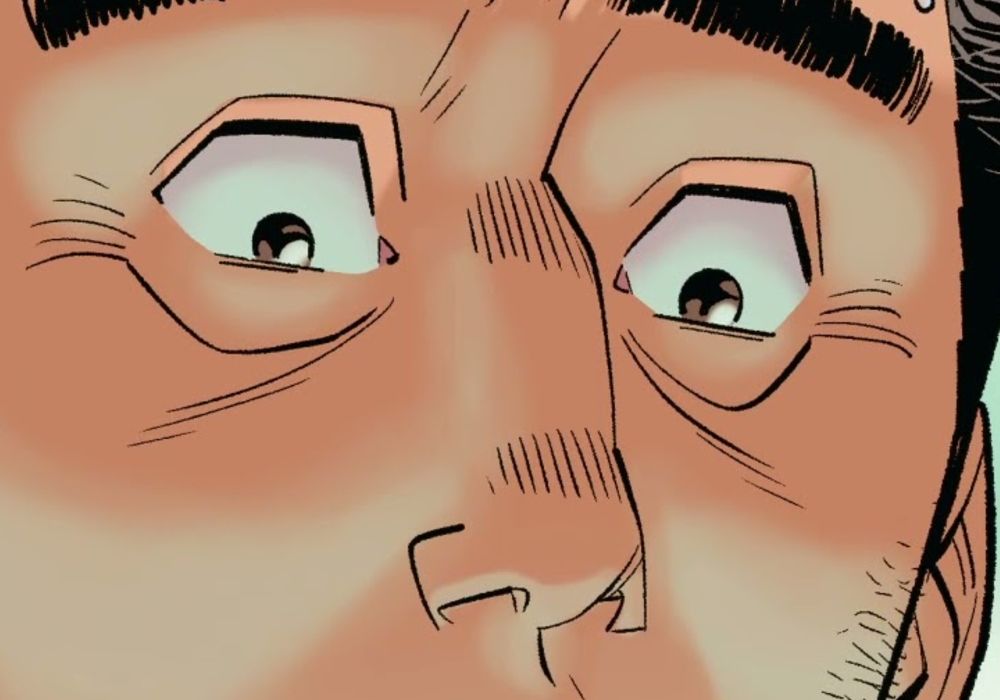 A serial killer with a penchant for music trivia and vinyl records and his best friend, a retired law enforcement agent, must team up amidst an investigation into a sunflower farmers’s cult. Minimal Mild Spoilers Ahead 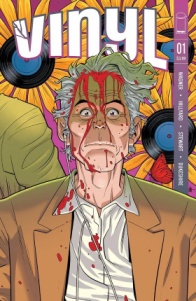 Remember before streaming services and on-demand when you would flip channels in the middle of the night and stumble upon some insane movie? It made no sense because you came in in the middle and you were already a little out of it because it was 3 AM? That’s “Vinyl” #1 from the jump. Granted, it lets you know you are coming into it with the first images you see set in the future of the story, but it’s still completely insane, disjointed, confusing, and fascinating.

The first three pages are absolutely blood-soaked and horror fan’s dream come true. An injured man sits bleeding out as some sort of un-dead zombie woman shuffles towards him with an ax, and a clearly troubled man sits fiddling with a teddy bear mask’s button eye as he tries to remember the name of the song playing. Time is of the essence and he’s just sitting, not helping the bleeding man who is begging for his help. And this is just what’s to come. After this cliffhanger sequence, the story jumps back to the beginning and we learn our protagonists’s names. The man who will be bleeding in two days time is Dennis, an agent working for an unknown law enforcement agency, and the peculiar man with the teddy bear mask is Walter. Dennis is following a case trying to prove that Walter is a serial killer. They meet up occasionally so Dennis can get information in hopes that Walter will slip up and incriminate himself. It’s a bizarre relationship, and Wagner’s script cuts to the chase. Dennis has basically no patience for Walter, and we are put in his shoes. Dennis tries to skip ahead to the good parts, like any impatient reader may hope to do.

The writing front to back is fast paced and does not care a bit if you can’t keep up. The narrative structure is choppy, even when moving chronologically. Once the story starts it never lets up and it brings you along for the ride. Characters are brought in with the turn of every page and we are quickly introduced to them and their core motivations in the story. Even without holding our hands, Wagner immediately gets us to know each character enough that we understand their way of thinking and what makes them special within this world. Walter’s characterization is one that keeps you guessing. We never fully get a grasp on him. Is he really that out there or is he faking because he knows the law is very close to discovering what he’s done? It is clear that he does have an obsession with music, and quite possibly this ‘friendship’ with Dennis. Dennis on the other hand isn’t a puzzle at all. Everything is face value with him. His impatience, dwindling empathy, and his inability to mask his true feelings are just some of his major faults that he wears openly. As we get acquainted with some of the other secondary characters, Wagner gives us just enough of an introduction so we get where things could go from here, but leaves out plenty of key details to keep us on our toes.

Hillyard’s artwork is clean and crisp with plenty of detail throughout. Fans of artists like Ryan Ottley, Tony Moore, or Mike Henderson will see a kinship here. The character design is smartly done giving the entire book a mildly Adult Swim cartoon look that keeps one foot planted firmly in the more outlandish and comedic side of the book, while the work is sophisticated enough to stand with any other modern comic in terms of the talent behind it. Even when viscera is flying, Hillyard gives every page and panel a weight and a beauty to it. It is equally disgusting and charming. A fine line to walk for sure, but he balances it wonderfully. Backing his talent is multi-Eisner Award winning artist Dave Stewart bringing his genius into the fold. I’ve said many times before that Stewart’s work always looks like he just magically knows how a comic should look, as if it hasn’t taken years of practice and thorough collaborations with the writers and artists he teams up with. This is not only a much brighter palette than what we usually get from Stewart, but the style is also quite different. Colors are more solid, less blending required. Like Dennis, what you see is what you get. While overall the work may look more simplistic that what he usually takes on it is clear that the entire book is masterfully done, as always. This world may look bright and somewhat silly, but the heart is as dark as any other horror comic out there and the mighty Dave Stewart has once again stepped up to the challenge. We would all benefit from a future team up of Stewart and Hillyard once “Vinyl” has wrapped.

Going in mostly blind on this comic is definitely the way to go. I read it knowing nothing about it and while it was a fun read, maybe having even the most basic understanding of what I was getting into may have helped initially. It definitely isn’t just about a music fan or a record label. “Vinyl” is going to be a six issue series, and if the rest of the series keeps up the momentum and quality of this premiere issue, we are in for one hell of a ride. “Vinyl” could very well be the next “Nailbiter” or “Something Is Killing The Children.” Horror fans should be picking this up.

Final Verdict: 8.0, “Vinyl” is all at once unnerving, gory, funny, frustrating, and wonderful.