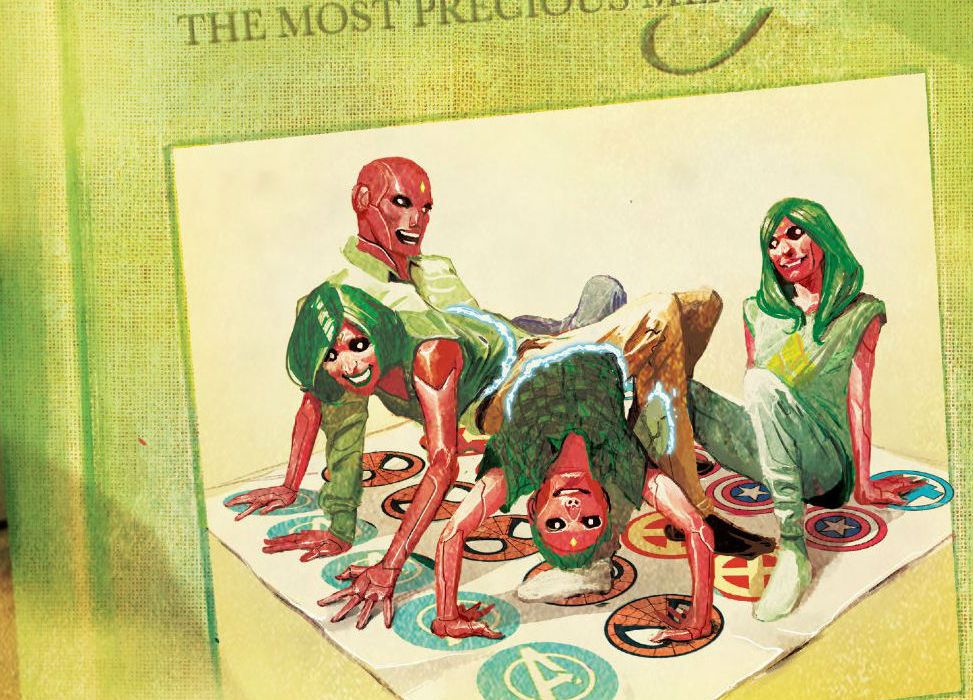 Whelp, we’ve come to the end. Let’s get to it. There will be some minor spoilers. 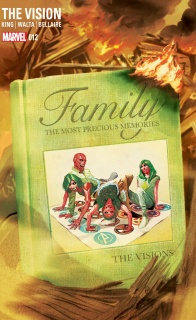 A while ago, a robot created a family. And all was good. For a while. Then came the murders. The lies. The betrayals. The battles fought. The battles lost. The family lost. And now, at the end, Vision stands alone. He must decide how he will go on, if he will go on, if he can go on. And that decision will shape the Marvel Universe for quite a while. The epic, stunning conclusion to the most highly praised series of the year. Simply put, this is the issue everyone will be talking about.

We are here at last. Eleven harrowing issues have come and gone and have all led up to this moment. Writer Tom King has called the trio of comics he’s written -”Omega Men”, “The Sheriff of Babylon” and this- the “Trilogy of Best Intentions” and I believe it. Protagonists who generally want to do the good thing but end up doing very bad and just how much damage it can cause to themselves and those around them. In this book’s regard, Vision tried to create a “normal” family but it went so awry and now there is nothing left but the final confrontation and the fallout.

And I have to say, a good chunk of the overlying plot details to this issue were predictable.

And that is not a bad thing.

There is a skill in subverting reader expectations. It can create quite a thrill and make your story all the stronger for it. That being said, there is equally a skill in going exactly where you have been leading your audience. The creation of that dreadful inevitability. A scene created that the reader knew was coming, but it still hurts all the same. That is talent. And that is one thing Tom King nailed here. The confrontation between Vision and Virginia would only have one outcome and that scene is the major crux of the issue. It’s quiet, contemplative, draws from a great deal of established threads and is bitter with only the faintest twinge of sweetness. Both characters imperfections laid completely bare and concluding with a full-page panel that is so wonderfully and tragically composed by Walta and colorist Jordie Bellaire that you shouldn’t be too shocked if you see it on “Best Comic Moments of 2016” lists.

There isn’t just gloom in this issue. Or rather, the gloom is mixed with the optimistic and the strange, as it has been with this book and -forgive the pretentiousness- as it is in life. Now, if you managed to avoid the Insidious Comic Hype Machine that let us know Viv would survive and go on to the “Champions” book… well good for you! You are a warrior and a scholar! But yeah, Viv is still living with Vision in their home and there is a small scene of hope between the two, in spite of all the terrible things that have happened. And then it comes to that final scene, where the bizarreness, sinisterness, and tragedy that was such a part of this series comes back in full swing and, in my opinion, conveys one message: We try and we try. We try to get it right. Even when we get it wrong. Even when we really shouldn’t.

Gabriel Walta and Jordie Bellaire have been as synonymous to this series as Tom King. They have provided such a grounding to this series that, let’s face it, was not a superhero series at all. I shudder to think what this series would be like with the Standard Superhero Artwork. Panel pacing has always been a big factor in this series and it is one of the few that can use that nine-panel grid and actually know how to use it to make tiny moments as impactful as those big splash pages. With such a great use of space and the lack of those bombastic depictions of violence common with Big 2 comics, it sells the somberness to this final issue.

One page spread in particular is a haunting one. It’s of Vision, about to go inside his home, nothing but an eerie, bright white light in place of the inside of his home. Coming out of the stark, cold, snow falling outside world. There’s only one line of narration, a call back to issue one. It was the real sell point of that “inevitability” factor I discussed before. Have to give major credit to Bellaire’s toned down colors here and the great use of shadowing on parts of the Vision’s home. The shadows that have always been cast on this faux-perfection.

One last bit to praise is the cover. Mike del Mundo’s covers have always been a treat on this series but this is perhaps my favorite of the bunch. It fully encapsulates the contrast of wholesome and bizarre, the heartwarming and the creepy, the inhuman and the very, very human.

“The Vision” joins the likes of Kieron Gillen’s “Journey Into Mystery” in the lowkey Marvel books that transcended their little corner of the universe into something that is essential reading for people. Like “Journey”, it wasn’t completely perfect (as I said in my review of #11, my feelings on Victor’s death are still, at best, mixed. Speaking of: Wanda and Tony go out of their way to revive the dog but not Victor? Really, King?), but it is the book that you can create when you have a team so in synch with one another and have the ambition and skill to tell stories outside of punch ups and surface-detail character moments. Stories with the themes of normalcy and trying to define that, identity, love, hate, sadness. It’s sad that it’s gone, but great while it lasted.