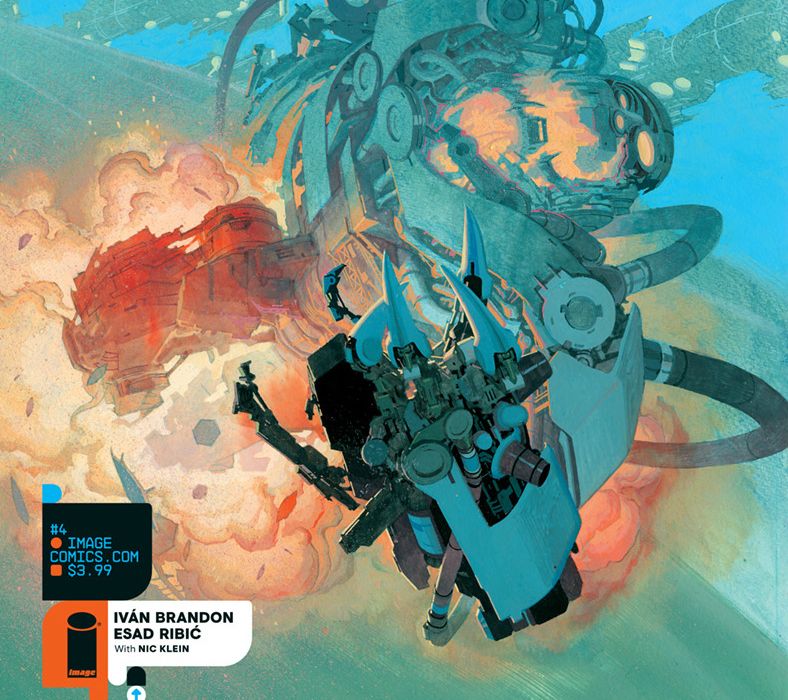 Esad Ribic’s first creator owned series, “VS” has been one of the best-looking books since it began earlier this year. Along with a story from Ivan Brandon and coloring by Nic Klein, the world and art of “VS” have consistently brought the kind of epic scale illustrations that Ribic became know for in his earlier work. With “VS” #4, that large-scale artwork continues to impress, but some of the smaller parts of the series end up being a little bit lacking. Read on for our review, and a small number of spoilers. 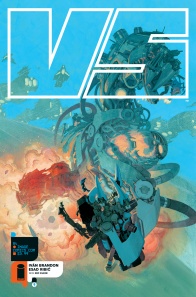 Satta Flynn’s refusal to lay down and die drives the omnipotent systems that rule humanity to make a drastic decision. The nail that sticks out gets hammered down, but what if the hammer breaks the whole world at the same time?

Since its first issue, “VS” has slowly built the world of its story, brick by brick, snippets of dialogue at a time. As the series has progressed, these details have created a world that you want to know more about. The small tastes that the creative team have given us are enough to whet your appetite, enough to make you want to learn more about the world. In this way, the series has worked wonderfully. The curiosity about the world keeps you invested in the story of Satta Flynn, the old, beaten down warrior that has become a sensation in the war games but is far past his prime. Learning more about the world has created enough interest in the story that it gives a reason to admire the fights and images that the art team has created.

In “VS” #4, Esad Ribic continues to give stunning environments for the reader to appreciate. IN this issue, he provides catwalks made almost entirely from light, pathways cutting through a crowd that are separated by a translucent shield, the desolate, rocky outcroppings on which most of the war games in the series are waged. All of these things work to create a sense of place, and even more than the dialogue and narration, show us the world. Nic Klein’s colors bring these locales to life in ways that are sometimes alien in their color schemes, but still give a sense of reality and place.

When talking about “VS’s” world building, I would be remiss not to mention the ads and graphic design from Tom Muller. Muller is able to do so much with so little in this issue and in the series in general. The small pop-up ads that sit inconspicuously in the corner of some panels both say something about the world this series exists in, and what the ads are advertising remind the reader that almost everything happening in this series is part of a televised broadcast. It’s such a simple yet effective tool for keeping the reader grounded in the reality of the series.

If there is a problem with “VS” #4, it’s that some of the storytelling goals of the issue seem to be at odds with one another. The goal achieved most effectively is the one that positions readers as viewers of the war games happening in this world. This creates a certain amount of distance between the reader and Satta Flynn. In terms of helping to build the world and make the reader feel as if they are a part of it, this tactic works really well. The problem, though, comes from the other goal the issue tries to work toward, which is getting the reader invested in Flynn’s story. “VS” #4 contains a few of what should be very pivotal moments for Flynn. But, because “VS” has kept such a distance between the reader and its characters, it keeps these moments from landing as well as they should have.

Over the course of the series, these two goals have been in conflict, but for the first time in “VS” #4, that conflict is affecting the series in a negative way. It felt like, at some point, the series would pull back the curtain on Satta Flynn, giving us some insight into who he is, what he wants, what he is like, in a way that is more than the very general sense that we have gotten so far. But, as more parts of the world have been introduced, more characters and interests added in, Satta Flynn has stayed relatively the same. He is a man who is past his prime and doesn’t especially seem like he wants to be fighting any more. That is pretty much all we know about him, and while that is enough to set the plot of the series in motion, it isn’t quite enough to keep his story at its most engaging.

Since we are not given the chance to get any closer to Flynn in the story through any kind of narration, the main thing we have to rely on is the art. In this area, “VS” #4 is still firing on all cylinders. While we don’t get to know what Flynn is specifically thinking, Ribic is able to show through his facial features and body language what he is feeling at any given moment. There is bug-eyed terror when Flynn is confronted with being in person in front of a crowd, disgruntled anger when he is forced to use newer gear he isn’t used to, fear and hopelessness when he loses the upper hand in a battle. These small moments do a good job showing what he is feeling, but there aren’t enough scenes that showcase Flynn as a person for the reader to effectively empathize with him.

Overall, “VS” #4 is still a satisfying package. The solicits for the series say that it will be ending with issue five, and maybe that final issue will contain some of the closer inspection it feels like Flynn and this series needs. But even if it doesn’t, for what it is right now, “VS” is still a very good book. The art is consistently epic and beautiful, the world that the creative team has built is intriguing, and the story, even if it is lacking in personal stakes, still works for the most part. “VS” #4 is another enjoyable chapter in the series but is still one that feels like it is missing a little something.

Final Verdict: 7.5 – “VS” continues to be a beautiful book, but insight into its main character is a little lacking.