Adam Green first gained recognition as a member of the Moldy Peaches, an ‘anti-folk’ band from New York City that, half a decade after breaking up, achieved widespread notoriety for its song “Anyone Else But You,” which featured prominently in the film Juno. Green has been prolific since the late 90s, releasing ten records, including Engine of Paradise, a new album released concurrently with “War and Paradise,” a new graphic novel he co-wroted and co-illustrated. A visual artist and filmmaker in addition to a musician, Green has been taking projects into multi-media directions more as of late, and this is the latest example of synergy between releases. While these releases share some of the same DNA, they are wildly different ventures that scratch very different artistic itches. 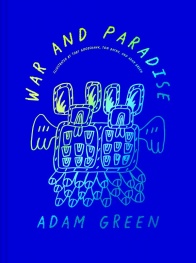 Operating your consciousness can feel like playing a video game, and Adam Green would contend that it felt that way thousands of years before video games existed. In War and Paradise, the question of time and consciousness is central as the internet meets the Middle Ages. Green’s graphic novel is a comic farce spun out of control, out of time, and into an entirely new dimension of a Jodorowsky-like psychological survey through a lyrical interior landscape. As satire and absurdism conjoin to become the most logical response to our own wildly confusing and nonsensical world, War and Paradise cuts its sharp social commentary with laughter. Green’s insightful and imaginative prose will transport you to somewhere you’ve never been before.

“War and Paradise” is a bizarre comic that feels, at times like a philosophy text book, a bot-generated script, and a product of Google Translate gone awry. A brilliant turn of phrase will follow a non sequitur, and all the while a (relatively) straight forward plot is twisted and obscured by the bizarre dialogue. The book follows a growing war between humans and robots, tells stories of people falling in and out of love, and delves into discussions of the afterlife. It’s heavy shit, but the presentation obscures that.

Green’s (and Goodshank’s and Bayne’s) illustrations tell an inimitable story that pulls inspiration from pop culture at every turn. “Turbo Marco” is essentially Super Mario, except that his martyrdom on a cactus inspires a new religion. Ninja Turtles with 3 eyes are subway performers, Ronald McDonald, sans makeup, is a guide through the afterlife. These flourishes, mixed with the brightly colored, almost Yellow Submarine inspired costumes, the medieval setting, make for a vibrant and exciting visual basis for the book.

Taken with the absurdity of the language, there are passages in the book that feel like an assault on your eyes and brain. You can’t help but laugh when a robot (insex) named Napoleon says that he killed a rabbi named Bagelheart because ‘he hates our freedom,’ a direct reference to why George W. Bush claimed 9/11 happened. There’s so much to unpack in that one sentence, and sentences like that happen three times a page. Plus, the character saying it had tri-corner hats and medieval pantaloons and are talking about eating insex ejaculate on their biscuits and talking about ascending into the afterlife. It’s a lot to take in.

The record, Engine of Paradise is quite different in its presentation, though it still asks questions about the afterlife, the nature of love, and more. The record, sonically, more in common with Lee Hazlewood and Glenn Campbell records than anything that replicates the assault on your senses that the comic can be. The songs are beautifully recorded, with nice, understated orchestration and strong, in your face vocals from Green. Some of the songs, such as “Freeze My Love,” share some lyrical similarities with the comic, but for the most part, the album is a far more accessible entry point for folks unfamiliar with Green’s work.

I find that very interesting, because his early solo work as well as the Moldy Peaches could be difficult to get into a first glance, either for some of the song structures and lo-fi recording techniques, or for some of the lyrical content. But here, the songs hang with those late 60s/early 70s country records really nicely. It’s also interesting to pair such a straightforward sounding recording with such an over the top comic. Don’t get me wrong, I really enjoy the juxtaposition; it is just an unusual combination, though a successful one.

One of the people the artwork really reminded me of, and I’m sure part of that is recency bias, is Daniel Johnston. Green and his collaborators don’t quite have the manic energy or fear of the devil (nor, for copyright reasons, Captain America or Casper), but it does have the mixture of questions of the afterlife, pop culture and commercial figures popping up, and odd sexual energy. This is far more cynical than anything Johnston ever did, but it has the same technicolor innocence that much of Johnston’s work had.

I tried, a few times, to listen to the record while reading the comic, treating the book as the libretto to the album’s score, but it didn’t quite fit as well as when I enjoyed both separately. When taking them in on their own, the individual merits shown through more clearly, and each work stands on its successes. Plus, it helps to find those connections when you hear the lyrics more clearly than when you’re struggling to read dialogue and decipher the sung words as well.

Overall, the book and record are really different, but really fun sides of the same coin. The book will absolutely make you laugh, make you cringe and, once every few pages, hit you with some unexpected wisdom. What more do you want?