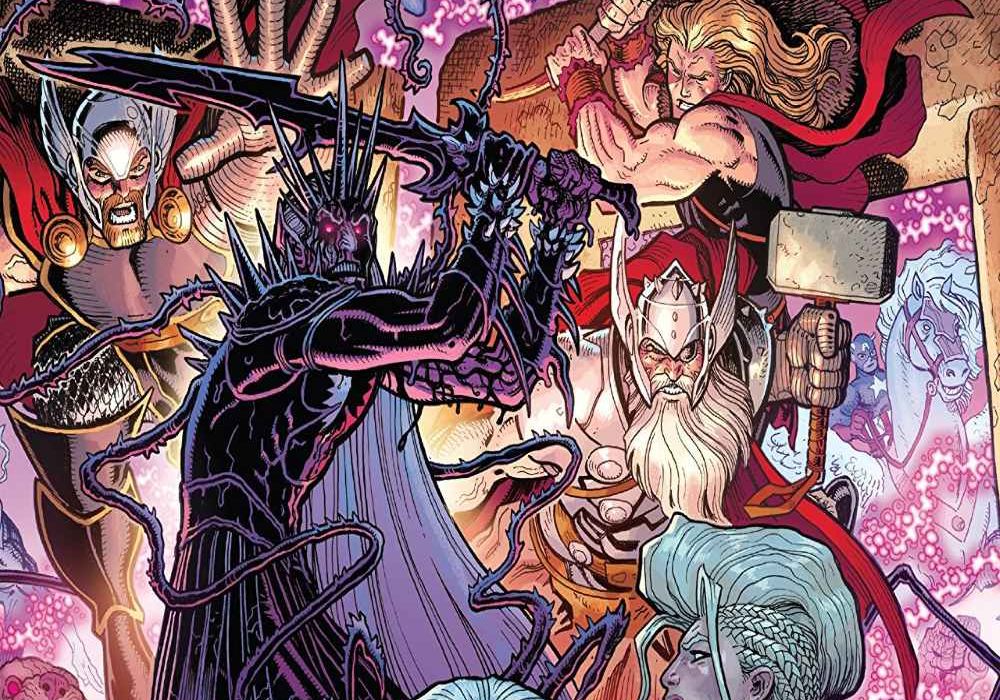 You didn’t come to a comic book website and click on a review of a major superhero crossover event because you aren’t a fan. Being a fan of the comic book medium and the superhero genre makes you familiar with certain modes of storytelling. Good versus evil. Triumph over impossible odds. The illusion of change. Stick too close to the formula and your story feels stale. Move too far away, and it’ll feel incoherent. It’s a hard line to walk, and “War of the Realms” is a godsdamned masterpiece. 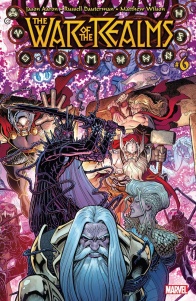 Cover by Art Adams & Matt Wilson
Written by Jason Aaron
Illustrated by Russell Dauterman
Colored by Matt Wilson
Lettered by VC’s Joe Sabino
THE WORLD-SHATTERING CONCLUSION! The tides begin to turn as unexpected allies appear in a twist that will shake the heavens! Malekith’s allies are faltering at last before the might of all Earth’s heroes, but the Dark Elf King has one final trick — and it’s got a VENOMOUS bite! Out of options, the God of Thunder makes a sacrifice that will leave him forever changed. But will it be enough? And what heroes may fall in his wake? Midgard’s fate is sealed as Jason Aaron’s years-long saga comes to its epic conclusion!

First: all hail Jason Aaron, Lord of Thunder. He’s been writing Thor since 2012, and his run has been consistently thrilling. Aaron leans into the pulpy weirdness of comics, which is how we get scenes of Daredevil battling the “Blizzard breath of Laufy” or a dragon tiger crouching atop Venomized Stonehenge. Aaron always takes it to the limit and pushes right past. Merging Malekith the Dark Elf King with the Venom symbiote is awesome. But then to add to that the Ebony Blade of the Black Knight? Unbelievably metal.

Next: all hail Russell Dauterman, Prince of Light and Chaos. This series would be nothing without a good artist guiding it and Dauterman does career best work here. I’ve always been a fan of Dauterman’s art, but in “War of the Realms’ he took his panel layouts to the next level, setting a new standard for the industry. He was asked to draw some crazy stuff, and he makes it all coherent but beyond unbelievable. Every beat of this story will have you tearing at your hair, pumping your fist, or quietly clutching the comic to your chest.

Part of writing a story in a genre is delivering on the promises of the genre. This is the conclusion to a superhero fantasy war epic, and that holds the promise of certain things. Sure, the creative team could have subverted expectations, shocked us all with a quiet issue of introspection, but they didn’t. They went big, brash, magical, and magnificent. Aaron draws from pro wrestling here and lets the combat tell a story. Weapons exchange hands, there are surprise entrances, and each move tells you something about the combatants. The fight is not just decided by superpowers, but their underlying emotions.

Remember the big superhero fights in the Bendis era of Marvel events? Everyone just posed for a big splash page. This, this is how you do an epic showdown. This is a mythic fight that could bring a tear to Walt Simonson’s eye. Remember how at the end of “Siege” Thor defeated the Void by pummeling him with the help of Cap and Iron Man? That fight ended with a really really big lightning bolt. This one has lightning, but also a meditation on self worth, fear, and sacrifice. It’s the potential of this kind of story realized.

All hail Matt Wilson, King of Colors. The good Mister Wilson is one of the most prolific colorists in the biz, so it can be easy to take him for granted. He does not let you do that here. His work is always good, but this is phenomenal. There are some pages that are only colors, lightning blasting across fiery blizzards. Doubtlessly, Dauterman lays a lot of good foundation with his panels (and Aaron with his script) but it is Wilson who makes these pages impossible to ignore. Wilson has colored so very many comics that it isn’t easy to call something his best work, but this issue has to be in consideration.

What’s truly stunning about this issue though is how coherent it is on every single level. That sounds like faint praise right? Every story should aim for coherence. But “War of the Realms” #6 works for everyone. It works as a conclusion to the “War of the Realms” miniseries, and to the event. It caps off seven years of comics, and acts as an introduction to the “King Thor” miniseries we know is on the way. But despite all of that, I would have no compunctions giving this issue to a kid who has never read a comic. And that is the truest test of how effective this issue is. It can wrench emotions from me, a lifelong Thor nerd, but it can also electrify a neophyte and make them a true believer.