Marvel is host to several outlandish characters, even by comic book standards. Let’s see, we’ve got Galactus, Devourer of Worlds. Howard the Duck. There’s whatever the heck Forbush Man is. Swarm, the Nazi made of bees. Hypno-Hustler in all his funkadelic glory. Yep, some strange customers for sure. You ask me, the Punisher has them all beat. 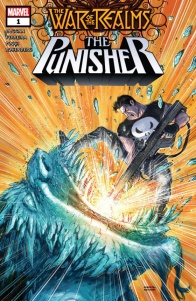 Written by Gerry Duggan
Illustrated by Marcelo Ferreira
Lettered by VC’s Cory Petit
Colored by Rachelle Rosenberg
PUNISHER: AVENGER OF MIDGARD! The War of The Realms has brought monsters to the streets of New York City, but New York has a monster all its own…Frank Castle, A.K.A. THE PUNISHER! And he’ll be damned to Hel if he’s going to let a bunch of Ten Realms tin-pot tyrants terrorize his town. But given he’s one man against an army of monsters, Hel might soon have him! The War of Realms is about to meet Marvel’s One Man Army. Expect Punishment!

Hate to burst your bubble if Frank Castle’s your favorite character or something, but you know his power is just bullets right? In a world of mutants, Inhumans and everything in between, he is literally just a guy. Not even a guy that trained for years with masters of several disciplines like Batman or a guy in a high-tech suit of armor like Iron Man. I know he was a Marine but…come on. Why are villains even afraid of him?! He should have gotten knocked out years ago. My favorite Punisher moment is, without a doubt, when Molly Hayes punched him so hard he could barely stay conscious. THAT should have happened to Frank several times over by now. Maybe it’s just me, but the character seriously challenges my ability to suspend disbelief.

“War Of The Realms: Punisher” #1 drops Frank Castle deep in the heart of the War of the Realms. It’s chaos outside as Frost Giants, Dark Elves and hell hounds run amok. While the A-list superheroes are presumably on the front lines, Punisher is down in the streets. He has the misfortune of catching a particular Frost Giant’s attention and a poor family gets caught in the crossfire. Only the father is left alive and Frank carries him to the nearest hospital a few blocks away.

Frank promises to avenge the man’s family when a doctor asks if they could go anywhere else. The War of the Realms is forcing the entire hospital to evacuate to New Jersey through the Lincoln tunnel. It’s a suicide mission but they don’t have any other options. When a prisoner transport gets stuck in the war zone, Punisher commandeers it and arms the prisoners with melee weapons. With an army behind him, Frank sets out to get the hospital evacuees through the tunnel.

I liked this issue more than I thought I would. I had no idea how the Punisher would even factor into the War of the Realms. Bullets may be effective against gangsters but are probably little more than a nuisance to trolls and such. Instead of having him on the front lines, this issue looks at the war’s fallout. I really appreciate that. All these epic superhero battles aren’t without consequence and it adds depth to the overall story line to look at these things from all sides.

This issue also allows Frank to be a proper hero for once. Typically, the Punisher is an anti-hero, heavy on the ‘anti’. Here, he’s less focused on punishing and more focused on actually saving people’s lives. He comforts the father who just lost his family and races to get the man medical attention. He rises up to help the evacuees through their suicide run. The most shockingly heroic moment was Punisher putting aside his obsession to recruit the prisoners.

Frank showing mercy to criminals is extremely rare. In “Secret Wars”, Frank crashed a super-villain party to mete out his bloody version of justice. The world was literally ending, the criminals would have died anyone but Frank still had to kill them. That’s the kind of guy we’re talking about here. I fully expected Frank to kill everyone wearing an orange jumpsuit and take the bus for himself. If the hilariously terrified faces penciled by Marcelo Ferreira are any indication, so did the prisoners. I am more than a little interested to see where the creative team takes this story. The Punisher working with criminals…maybe the world is ending.

The art is strong this issue. Again, the expressions of pure fear when people meet the Punisher crack me up in a morbid sort of way. It isn’t all chuckles though. Things get dark in this comic. The War of the Realms is pure chaos and Marcelo Ferreira makes that abundantly clear.

The hell hounds are gnashing their teeth. The frost giant Frank tangles with is terrifying, even more so with a freshly disfigured face and furious spittle flying from his mouth. The whole thing really feels like hell has come to Earth. A standout moment from one of the fight scenes is Frank opening fire into a hell hound’s open mouth, the single bullet going through both the beast’s head and the Dark Elf’s on top of it. The Punisher is often too gruesome for my tastes but that was awesome. My favorite panel is Frank defiantly opening fire on three Dark Elves riding three furious hell hounds while shouting ‘You’ve come to die!’. I just stared at it for several minutes. ‘Brraap Brraap’ indeed. It would make a perfect heavy metal album cover. “War of the Realms: Punisher #1” drops an already outlandish character in an even more outlandish setting and I have to say, somehow it’s really working for me.

Final Verdict: 7.5 – This is going to be an insane entry in Frank’s war journal.