Comic book crossovers! If you’re a fan of the big two (DC Comics and Marvel), you really can’t avoid them. Sure, you could try. Go ahead, hold out and ignore the main series. The tie-ins, my friend, that’s where they get you. A series that you’re following can be completely derailed by a crossover. That might not be a problem if it’s a good crossover but it doesn’t always shake out that way. For every comic book crossover I like, there’s one I can’t stand. For example, I loved ‘Secret Wars’ but hated ‘Secret Empire’. Now here we are again with the latest crossover, ‘War of the Realms’. I’m not trying to jinx it but, well…so far, so good. 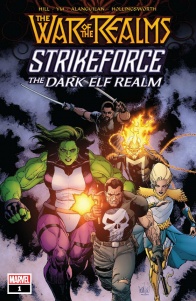 Written by Bryan Hill
Illustrated by Leinil Francis Yu
Lettered by VC’s Joe Sabino
Colored by Matt Hollingsworth
THE PUNISHER LEADS THE CHARGE TO SHUT DOWN THE BLACK BIFROST! Deep in the swamps of Svartalfheim stands the Black Bifrost, Malekith’s corrupted Rainbow Bridge and the only reliable means of travel between the realms with the true Bifrost in pieces. If the gods are going to stop Malekith’s invasion, the Black Bridge must fall. With her son missing and husband injured, Lady Freyja must take up the challenge herself. But she won’t go alone. Hulk (Jen Walters), the Punisher, Blade and Ghost Rider follow the All-Mother of Asgard straight into Malekith’s home territory!

I’m honestly surprised I’m enjoying it as much as I am. For one thing, I’m not really that into Thor comics. I haven’t been following Jason Aaron’s run at all. I skimmed “The Unworthy Thor” but not much beyond that. Another reason I expected to hate this is that I hated the last Asgard-centric crossover. Remember ‘Fear Itself’? Everyone got a hammer and there was something about a snake. I couldn’t even finish the thing, to be honest.

This tie-in is another win for the latest Marvel crossover. At the end of “War of the Realms” #2, the Asgardians and Midgardians began to form their plan of attack. One of their main objectives is to travel to the dark elf realm Svartalfheim to shut down Malekith’s Black Bifrost. The corrupted rainbow bridge allows Malekith to teleport his army across the ten realms as he sees fit.

Lady Freyja, mother of Thor, plans to lead the charge and assembles a ragtag crew for the suicide mission. Her team includes Punisher, She-Hulk (or just Hulk now, I think), Ghost Rider and Blade. Since the Black Bifrost may try to corrupt them, Freyja forces her strike force to confront their fears and the darkness inside of them. The goddess has her own internal struggle though. She can see the future and knows that she’ll have to claim the Black Bifrost and be corrupted by it for them to win. Frank convinces the goddess to do whatever it takes to win the war and in the end, Freyja accepts her fate.

One of this issue’s strengths is the unique mix of players here and their strong characterizations. The glimpse we are given of each character’s fears is fascinating. Jennifer is afraid that deep down she judges her beloved cousin, thinks Bruce Banner weak for giving into the Hulk. She’s also not as above Bruce as she might think deep down. Sidebar, I love that she uses lawyer lingo like ‘sidebar’ and ‘objection’.

Robbie Reyes fears he’s not a true Ghost Rider and thinks he’s an impostor. On a meta-level, these are the same accusations that other legacy characters such as Sam Alexander or Miles Morales face. Blade fears he’s going to become what he hates most and give into his vampire nature.

When confronted with his darkness, Punisher doesn’t hesitate to shoot his illusions. He’s already done with his test when the others are still figuring it out. I don’t like the Punisher all that much but I find myself liking the character a lot in this crossover. First, over in his tie-in and then here. Bryan Hill has a strong take on the character throughout this issue. Frank is…well, frank. He is simple and resolute. The character’s unwavering nature is actually sort of noble here. It’s also exactly what Lady Freyja needs.

The All-Mother carries herself with elegance like a proper goddess but when she’s vulnerable, it’s Punisher who comes through with the sage advice. I enjoy her character a lot here too though I’ve been completely ambivalent to her in the past. Bryan Hill takes two unexpected leads and makes them so compelling. In just one issue, he really sells the unexpected bond the two form. All of the interactions and dialogue between the characters is great.

It would be a crime not to note the contributions of artist Leinil Francis Yu. The high-profile artist is always a plus for any comic and that trend continues here. The story aside, you could stare at the artwork for hours. There are so many great moments. I enjoyed the minimalist series of panels that just showed Hulk’s fist, Ghost Rider’s chains and Blade’s fangs. The characters are instantly recognizable with just that. There’s the panel of the team looking awesome after they beat Freyja and the spread of them charging the goddess, finally coming together as a time.

I also really appreciated the use of shadow throughout this issue. The strike force is going to the realm of Dark Elves and confronting their worst fears and inner darkness. The use of shadows accentuates all of that. Sometimes you only see half of a characters face or their silhouette from behind. It all helps make the stakes more intimidating, the issue more foreboding. Jennifer confronting the Hulk illusion and Blade confronting his ‘future self’ both use shadow to strong effect.

If I have a complaint, it’s that the issue actually skips over the battle for the Dark Bifrost that it’s building up to. You can see it but you’ll have to pick up “War of the Realms” #3 (Crossovers! That’s how they get you). This issue still wraps up very nicely but it sort of feels like maybe a page or two is missing. Still, the creative team does a fantastic job. It’s so good I’m actually kind of annoyed with Marvel editorial. This has no business being just a one-shot, one-issue team-up.