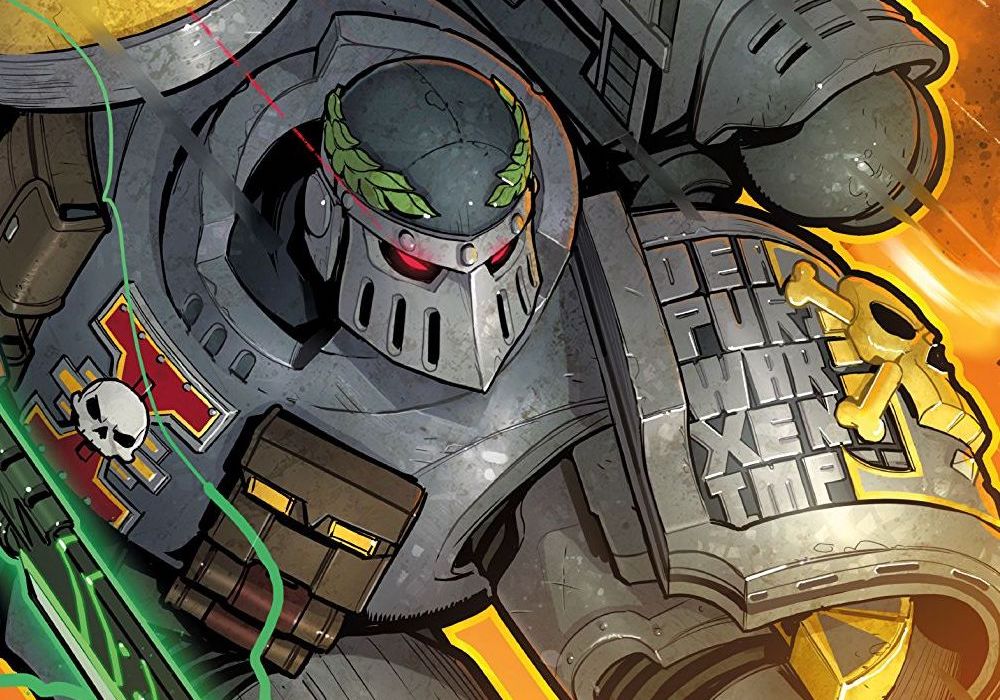 How does the beginning of the latest comic series from the Black Library fare for those who do not know the Warhammer 40,000 universe? Let’s find out. 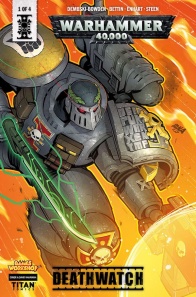 Deathwatch are the best of the best from all chapters of Space Marines! They alone have the strength of mind and body to battle the aliens across the universe defending humanity from the Xenos that would destroy them!

Aaron Dempski-Bowden is a veteran of the Black Library, the publisher of official Warhammer 40,000 media, and it definitely shows, for better or worse, in “Warhammer 40,000: Deathwatch” #1.

On the plus side, Dempski-Bowden’s story is not too complex. It is a simple “hold the line against aliens who could escape to kill humans” storyline, with minimal information needed on any of the various species, known in the franchise as “xenos” by the Imperium of Mankind. The only species actually shown aside from humanity, the Ur-Ghul, are simple enough to understand, providing an increased focus on the Deathwatch members themselves. The only other lore presented, such as the “Chronicle of the Lost,” are easily understood, allowing for a straightforward opening to this four-part miniseries.

Dempski-Bowden’s writing shows an understanding of the product that he is working with, the heterogeneous nature of the anti-alien Deathwatch’s chapter composition, but also leaves minimal room for newcomers to find their way. There is a dramatis personae section at the start of the issue to help discern the identities of different members of this Deathwatch squad, but there is not much in the way of information regarding what their different Space Marine chapters would actually mean for their personalities or experiences, nor an introduction to bring up why the Deathwatch is so important. Those who are familiar with the source material will have more bearing on why the Deathwatch is used in this situation, and why they are held in such high regard, but without that basis, there isn’t much to latch on to for those not steeped in the lore. In fact, the solicitation for this issue provides more details on the Deathwatch than the actual content of the issue itself. Perhaps that limited view of previous information was intentional, given most who would read something from this franchise would already be well versed in it if it came from the Black Library, but it does not give much leeway for people to look deeper into the massive franchise from this comic alone.

Sadly, Dempski-Bowden’s characters are somewhat stereotypical. There isn’t much in the way of nuance, with each of the members having maybe one or two character traits. The pious warrior, the old veteran, the gung-ho new meat, the bloodthirsty axe wielder, the levelheaded commander: each of these archetypes are present within the Deathwatch squad, which can be both a blessing and a curse. The blessing is that the story is that much easier to follow for such a short miniseries. The curse is that the beats are rather predictable. All that is left is for some characters to end up dying randomly to allow for the party to diminish in strength gradually.

Tazid Bettin provides some much-needed variability to the story with interesting, dynamic artwork in a wide variety of styles. Holograms and other computerized images with a more grainy film over them contrast against a more normal, thickly lined style for everyday people. Those physical people are drawn in such a way as to help distinguish between them while also keeping them in the hulking power armor that is part of what made the franchise so famous. Uses of perspective, from a sniper’s scope to a view from the perspective of a metal pipe to an over-the-shoulder shot and more help to keep the more mundane, quiet moments of searching for xenos interesting. Bettin further shows an understanding for a wide variety of art styles with the opening pages, which use a kind of “smoky” style to implant faces of individuals into the red rings around Calaphrax, both smooth and disturbing at the same time.

Kevin Enhart gives a lot though his colors as well. The blood reds of the area around the planet give a gory hint of what is to come, while the grays and browns of the clothing and architecture in Watch Station Xyston shows the sterile, unchanging nature of the stagnant Imperium. By possible deliberate contrast, the various Space Marines of the Deathwatch unit each have very colorful attire, their armors giving an extreme showing of the differences between the unit’s component factors, even if the writing doesn’t really measure up.

In general, this first installment in the “Deathwatch” miniseries does work very well for returning fans of the Warhammer 40,000 franchise. While the story is very run-of-the-mill so far, that isn’t necessarily a bad thing for the introduction to a story, and can lead toward a bigger twist down the line. Although there isn’t a lot for newcomers to latch on to, the small bits of lore, coupled with intriguing character designs (at least from an outsider’s perspective, if not a returning fan) alongside well-done artwork and coloring may be enough to at least keep them around for this four-issue series.

Who knows? Maybe the Emperor’s finest will surprise new arrivals.

Final Verdict: 6.0– A story that may lean too heavily into cliché or established knowledge still manages to keep interest for those who do not have a running interest in the Warhammer 40,000 franchise by way of well-done art and an easy-to-follow structure.