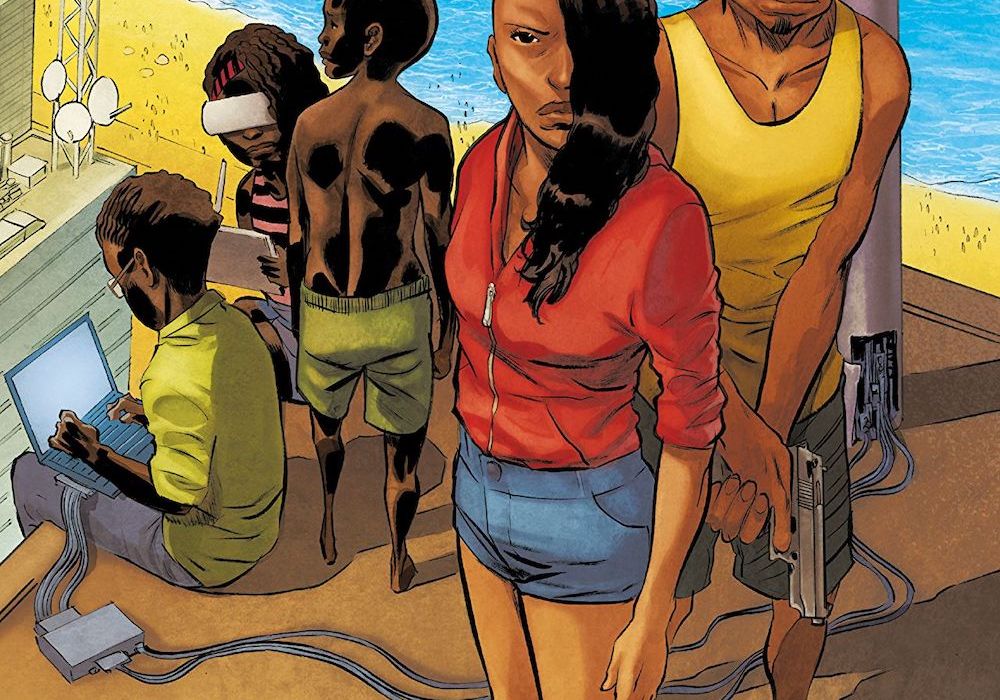 As they have done with Wolfenstein, The Evil Within, Dishonored, and Assassin’s Creed, Titan Comics returns with the second half of another video game duology of comics, this time focused on Ubisoft’s Watch_Dogs. Can this creative team continue the trend of rather good storytelling set by the others? 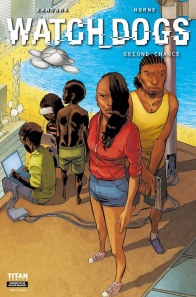 Watch_Dogs goes global, in part two of this fully-canonical thriller exploring the cybercrime world of Ubisoft’s record-breaking hacktivist video game series! Hacker Sauda discovers the true scale of the corruption enveloping her home, but finds a helping hand in a group known as Dedsec…

In the second half of the ‘Return to Rocinha’ storyline, titled ‘Second Chance,’ Simon Kansara has the important job of not only completing his two-part story, but also providing enough room for any new readers to jump in. With the wide world of Watch_Dogs and focus on an area outside of the United States that had not been ventured toward before this story, is he capable of both finishing what he has already created, while simultaneously being inviting enough for newcomers? The various elements of the Watch_Dogs series can be a bit hard to explain for those not already aware, so any ability to attract new readers would be welcome.

Luckily, Kansara is the right man for the job. Despite “Watch_Dogs” #2 not technically being the introduction to this story, there is more than enough room for a variety of different audiences to pick up this double-sized story. To newcomers, he offers an intriguing hacker-based story that does not require much outside knowledge, if any. To players of the game series, he welcomes them back to an area of the world that is not set in the United States to show a different way in which the systems shown in the games are used.

With only minimal exposition to concentrate on a “show, don’t tell” ideology, the corrupt world of heavy surveillance is on display at the front and center, from the undercover hacking operations to the unmanned drones to the use of cell phones to track people’s locations. While the initial scenes in a prison are less emphasized on that front, the brutal amorality of protagonist Sauda’s brother Sebastião in a prison breakout, along with the harsh language and overall violence around Sauda herself, demonstrates all that readers need to know about the way in which the people who are less wealthy are forced to operate in the favelas of Rio de Janeiro, Brazil before we even come across those in better areas who are in relative control of the situation (or as much as they can be).

Even the exposition-based dialogue that Kansara does utilize is heavily story-centric, rather than written in a manner that breaks audience immersion in the setting. Discussion concerning Blume Corporation, its nigh ubiquitous ctOS (Central Operating System), and the DedSec hacktivist collective each explain only the most basic elements for readers to understand the world around them, with the implication that the characters either already know about further details, or in some cases don’t particularly care about said details unless they are important to them in particular. In using this style of explanation, Kansara is able to further draw in the audience, making explanations feel all the more organic.

Kansara is a master of melding the aforementioned exposition into a natural conversation about something unrelated, and then bringing it back to the original subject once more. Explanations about the corruption that has fallen on Racinha, the largest of the favelas, blends seamlessly into a discussion about tools and programming on a drone, before turning back again once someone exits a room, and sneaking in some more commentary on the drone at the same time. The sheer normalcy of the different topics and the way in which the conversation can shift from one to another so well that it is difficult to tell when the discussion changed at all, makes everything about the talk between Sauda, Sebastião, João, and even some elements of Tomás work very well to establish them all as genuine people, rather than the archetypes they initially appear to fall into.

As written, the use of hacking is kept to a minimum, usually relegated to applying surveillance devices to various pieces of equipment, in contrast to the source material’s heavy utilization of the practice in a variety of forms. This decision by Kansara has the dual effect of showcasing how the technology available is less accessible, or perhaps less advanced, in Rocinha as compared to the likes of Chicago or San Francisco, while also presenting a far more down-to-earth, less wacky and ridiculous story unlike some elements of the games themselves.

Horne’s artwork focuses on thin lines, both to show the economic disparity between the social classes and to emphasize the color choices. On the subject of the societal emphasis, those outside of the corrupt governmental system, stuck in Rocinha, have a decidedly “rougher” look than those who are more “insiders” to the whole situation. The political officials seem to have a sharper, more heavily defined image to them. For example, the nearly pointed chin of the primary villain of the arc acting in contrast to Tomás’s more rounded features.

In terms of color choices, Horne uses relatively muted tones and hues, enabling the story to remain relatively low key and realistic. This tone enhances the threatening nature of groups like police officers or drug dealers. On the other hand, a very traditional sepia wash is used as an overlay to flashbacks, using that color as a tool while exposition works as an overlay on those images. While such a decision may be relatively heavy handed, it is nonetheless effective in getting the point across with minimal difficulty.

While Lauren Bowes’s lettering is of course not going to cover the entirety of the speech bubbles, considering “Watch_Dogs” #2 is being translated from French, the styling of the translated text still is rather distracting. At times, writing trails off not with an ellipsis or a dashed line, but without any punctuation whatsoever, leaving readers to wonder if there was a printing problem. Other times, the words or punctuation break the boundary of the established speech bubbles, making them both difficult to see and even more difficult to rationalize alongside the guise of immersion within the world.

Final Verdict: 7.0– Despite some difficulties in the translation of lettering across languages, the second issue of “Watch_Dogs” provides an intriguing story for newcomers and returning readers alike.