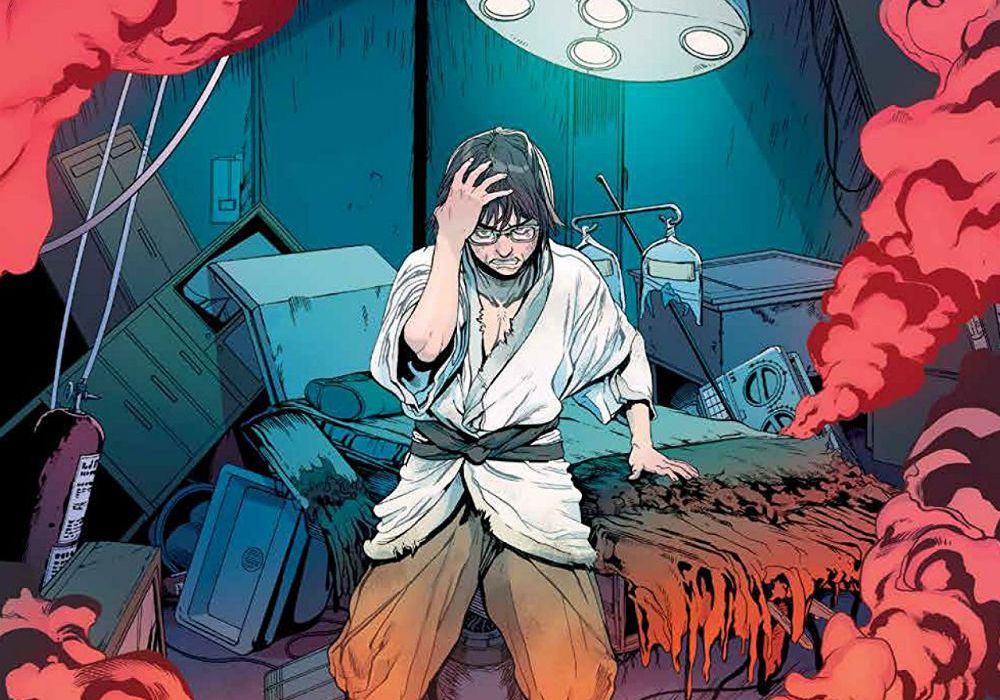 Remember way back in the third arc, when the New Gods fought the Old Gods on the streets of Japan? Well, it’s finally time to get back to Japan and deal with the destructive fallout of that incident. 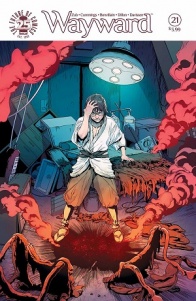 Cover by Steven Cummings
Written by Jim Zub
Illustrated by Steven Cummings
Colored by Tamra Bonvillain
Lettered by Mashall Dillon
“TETHERED SOULS,” Part One
Nikaido’s powers are growing, and he’s not the only one… WAYWARD unleashes myth into the modern world. It’s the perfect time to get on board and see what all the excitement is about!

Tension is a bit of a motif with what I’ve been writing about recently. “Batman” #25 was a Phil Collins slow jam of rising tensions, fueled by June Chung’s steely colors on Mikel Janin’s bleak blacks. The reader and the city, subconsciously are just waiting for the shoes to drop. The start of “Wayward”’s fifth story arc with issue #21 takes a similar but different approach to structuring the issue around the feeling of tension and a ticking time bomb.

Where “Batman” was a subconscious mood that wasn’t quite verbalized, Jim Zub artist Steve Cummings and letter Marshall Dillon verbalize that feeling of discontent. The opening pages to this issue aren’t so much narrated as they are cacophonous. These pages are like listening to an orchestra slowly walk out on stage and begin warming up and tuning in the minutes before a concert. Thought balloons with sentences run into other thought balloons, with even more thought balloons accompanying them reducing them down to a single word emotional state. The panels guide us through a hospital,l the deeper we go the shorter things get and the tempo increases. Until finally, with the turn of a page we find Nikaido strapped to a hospital bed literally surrounded by everyone’s emotions. “Hope” hangs slightly removed from all the “pain,” “hostility,” “stress,” and other negative emotions that surround him.

I’m unsure if to credit letter Marshall Dillon or colorist Tamra Bonvillian individually or as a unit for the color coding of these thought balloons. Either way, by color coding these thought balloons from the start, when they are still whole sentences, they do an effective job subtly training the reader on how to read them once they’ve been reduced to single word phrases. The coding also creates a clear emotional context for the brief one panel scenes Steve Cummings illustrates as we journey deeper and deeper into the hospital. While art is always open to interpretation, having a context for the emotional intent of a scene is always nice.

This structure also doses a lot to twist the dissociative aspects the cacophony of thought and gliding point of view initially create. For the reader, it’s all noise at first with no real idea exactly where things are. It’s been a while since “Wayward” been in Japan. But all of the formal trappings around this slowly develop who’s point of view this sequence hinges on: Nikaido. He knows exactly where he is and it is painful.

At the same time issue #21 adds a new wrinkle to the magical realism of “Wayward.” Generally, this mode is used to naturalize the supernatural and stop it from becoming a surrealist nightmare. But as the series has shown, the ability to see is the ability to believe, and many lack faith in this series. So, bringing in a continued government response – at least a traditional narrativized American ways of dealing with these sorts of incidents – is an interesting wrinkle for this generational shift in the pantheon. While undoubtedly guilty of mass property damage, they aren’t really “terrorists”, they can only see it one way. The Government’s response and willingness to characterize all of these actions as “terrorist action” also echo’s the first series of Digimon wherein a digital kaiju attack was written off as some kind of terrorist action/gas explosion (depending on dub or sub).

The idea of seeing is believing, is given form with the presence of the Defense Minister being seemingly mind controlled by Nurarihyon. He has no idea what Nurarihyon, who passes for an old man with some sweet Bam Bam Bigelow-esque head tats, really is. Maybe it’s my fondness for Japanese Salaryman comedies, but treating the Defense Minister more in the typical western satirical approach to bureaucratic officials seems like a missed opportunity. The comedy in his sequences also didn’t really land. There’s a good manic energy to Cummings art and his work with the put-upon secretary was effective, it just didn’t quite coalesce, unless the Minster was this way from the start which doesn’t seem to be the case.

Oddity around the adults of this story aside, Zub and Co. still show they understand the rest of the wayward children as Inaba and Segawa go about mounting a rescue mission for Nikaido. While the world around them may not have faith, they believe in one another and are in the process of figuring out what this all means for them. Which is a personal process, best articulated by Inaba, who refuses to act like Nurarihyon and dress as a human. (Honestly, if it weren’t for all the sharp instruments she carries on her person she wouldn’t be that far removed from those cosplay idol gatherings you see in Tokyo). But being a ronin kitsune from the start, Inaba’s seen things. For Nikaido and Segawa, this is all a learning experience.

For Nikaido it is quite the experience, after not quite going The Full Tetsuyo, and expelling all of the emotional energy he’d been absorbing. It is a traumatic moment, and the most violent episode in this series thus far. While the series has never shied away from the destructive capabilities of these new gods, those moments have been shown through a lens of black comedy and excess. Here things are just dark. Those who didn’t “pop like a balloon” get reduced down to mono-emotional drones. Cummings art and Bonvillian’s colors do a great job representing the horror and destruction in a new way. Cummings page design also dose a great job in building new tension over what Inaba might do to the clearly dangerous Nikaido.

After a trip to Ireland, “Wayward” final turns back and picks up with the rest of its sprawling casts. While this issue may not create the strongest frame to hang the rest of this arc on, the continued examination of past events effecting our cast is the kind of character centric writing I enjoy.

As a side note: the subject of this issues cultural essay by Zack Davisson (which are a big reason why I keep pulling this book) brought a sad timely chuckle that only watching the news and late-night comedy brings me these days. The subject: Healthcare. It’s a good read.

Final Verdict: 7.5 – Well, things sure started with a bang. The consistency of this series continues as it returns for its fifth arc.