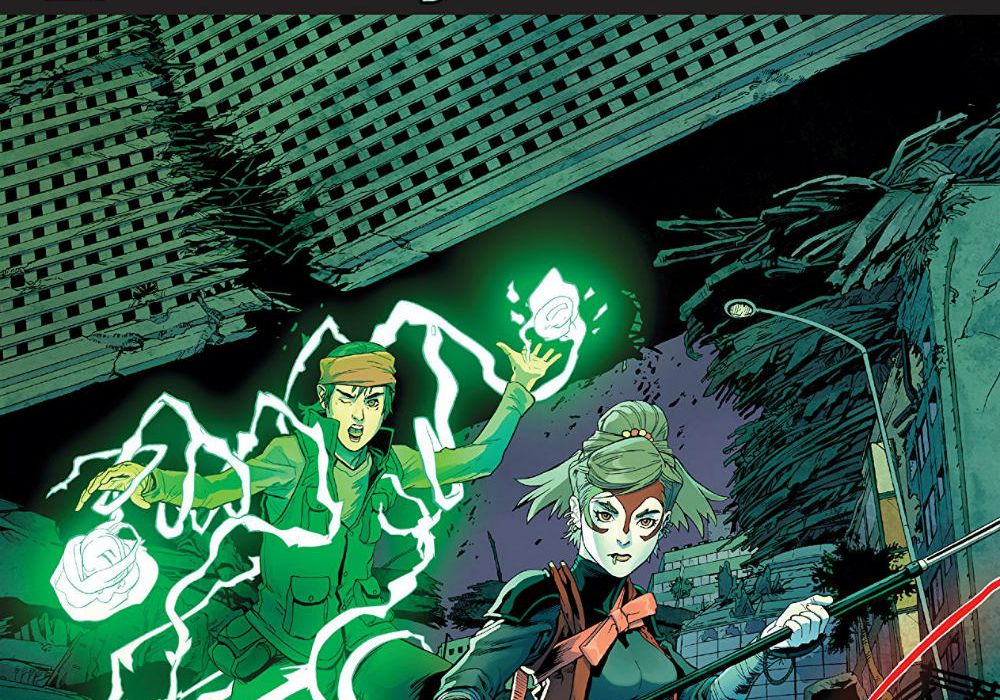 “Wayward” has been consistently one of the best reads when it hits shelves. While it isn’t the most showy Image title, there is a functionality and purpose to the design that energizes it the final arc begins. 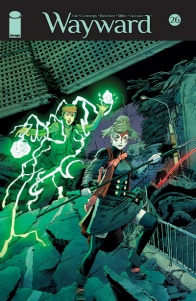 Written by Jim Zub
Illustrated by Steven Cummings
Colored by Tamra Bonvillain
Lettered by Marshall Dillon
“BOUND TO FATE,” Part One The end begins here! The Wayward are together at last, but is it too late? The Yokai have prepared a sacrifice that could change everything. This is war, and the battle lines will be drawn in Tokyo. STEVEN CUMMINGS (Legends of the Dark Knight, Dungeons & Dragons) and JIM ZUB (Avengers, Samurai Jack) get ready to close out their modern supernatural spectacle with the same sweeping artwork and gut-wrenching drama that has made this series a fan favorite for the past four years. Get on board and prepare for impact.

Stylistically “Wayward” is an example of magical realism, yet using a term like “realism” when considering the art has never fully tracked. Perhaps because of the inherent contradiction and tension in representing the supernatural as natural, which fits with the overall generational tension that ties the series together thematically. This tension feels more pronounced than ever in the bodies of the cast. Shirai is looking more and more demonic, sporting Apocolypse-esque striation across his face. Through these bodies, and other instances, “Wayward” #26 provides examples of how Steve Cummings and Tamra Bonvillian’s art works through this tension and realize the magical and realism of the series.

In terms of his figure work, Steve Cummings’s art is certainly representational. Normal human bodies are not super cartooned and markers of supernatural influences are generally subtle. The key  is Tamra Bonvillian’s pallet and the textures it imbues objects with. Take for example the close up of Segawa as Shirai is choking him. It’s one panel on a page with five overall, but the fact that it’s a close up makes it stand out. True to form, Cummings draws the face in an understandable manner. The bulging veins on Segawa’s face are a bit outsized but he was also getting choked rather hard. Bonvillian’s coloring gives the figure a sense of dimension and realism. She mixes an overall flesh tone with a tense beet red and gives his face a sense of dimension. How that same red plays off the color used for his tongue and blood streaming out of his nose. These qualities come together and give the figure a realistic texture, even if the line work has a few exaggerated elements. That sense of realism helps explain why another Segawa close up, one that features a bit of light comedy, also works. The source of the comedy is due in no small part of Marhall Dillon’s tiny lettering for Segawa’s meek “yay.” But that sense of meekness only works because of the expectations and context the art team have created with Segawa staring cross eyed at Inaba’s dagger centimeters from his face.

There is a functionality to “Wayward” #26 in its art and writing. It isn’t a high minded experimental exercise in sequential storytelling. Steve Cummings’s page designs are efficient in telling the story and stick to the Western mainstream norms, with maybe a dash of manga influence. Maybe we should consider that functionality as a sort of realism for the series, a sort of base level visual language easily understood and representative of a norm. Because, like the previously mentioned comedy, it helps set expectations. With this normalcy established, the moments of overt magic read as truly supernatural. The style of the book goes in a more expressionist direction. This contrast in styles comes through as Rori searches through Segawa’s thread for information on the Loom.

In this supernatural setting, it’s interesting to note how the body is used. In the standard setting, the body is the focus of tension between natural and supernatural. In these pages it acts more like an anchor to the natural world, the object that is real. The body stands because as Rori works her way through the weave, everything becomes void. Panels overlap one another with greater frequency. Earlier in the issue this was used more to express a rising emotion. Gutters switch between being filled with stark black and white creating a push and pull tension. Border paneling is now represented by the weave in pages, the great binder, tying scenes together across time and space. In these pages, “Wayward” feels the most experimental in form. Pages aren’t a measured unit of linear storytelling but the representation of a seemingly infinite plane of space-time Rori gazes into — literally on one page. Even with that experimental verve, there is still the narrative efficiency this series executes on, as the sequence broadly acts as a 6 page expositional montage as Rori learns more about herself and the role they play.

With the body being the place where the supernatural is expressed, the role of scenery becomes something of an anchor to help cohere everything around a natural order. A majority of the issue finds the Wayward working out their next move in an abandoned industrial zone. Cummings per usual draws scenery and architecture beautifully. There is a cleanliness to the garbage that surrounds them, the lines are all so straight. Once again, though, Bonvillian comes over and gives everything a textured feel with the color blends and the light source and makes everything feel like garbage. In particular the rust coloring she gives the metal bits in the background and a blue turquoise of the floor, their textures give the building the abandoned feel the location box described.

Issue #26 marks the start of the final arc of “Wayward,” and the creative team of writer Jim Zub and artists Steve Cummings and Tamra Bonvillian kick things off with a chapter that hits all the notes one should expect. By the end of this issue, the Wayward Children have their plan: destroy or take control of the Loom. And they hit some meaningful emotional beats for the core cast that should have readers primed for a not-so-good cry if the worst happens. All of this on the back of some subtly excellent art that represents some of the core motifs and themes of the series. It’s the kind of issue that has made reading the series an overall pleasure.

Final Verdict: 8.0 – The march to the “Wayward” finale begins, and the book is firing on all cylinders.